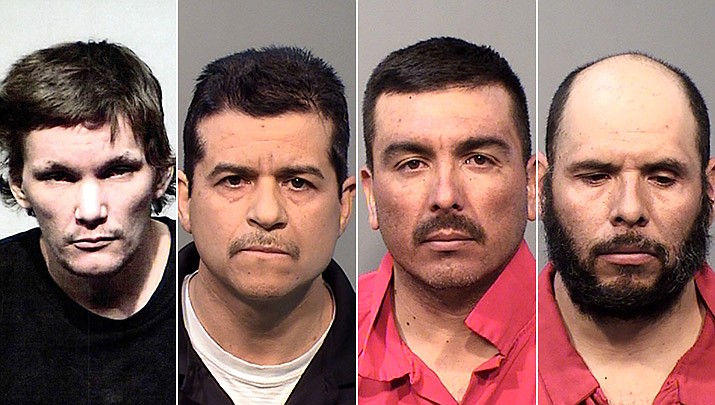 Deadly street drugs worth nearly $200,000, including 10,100 fentanyl pills and 56 pounds of methamphetamine, were seized during a multi-agency effort Wednesday.

The four suspects include 26-year-old Jacob Shaver of Camp Verde, 45-year-old Victor Moreno-Sanchez of Phoenix, 36-year-old Juan Sanchez-Lopez and 41-year-old Julian Salazar-Luna, both of California. All four are facing a long list of drug charges after deputies discovered 56 pounds of meth and more than 10,100 fentanyl pills during traffic stops, the release states. 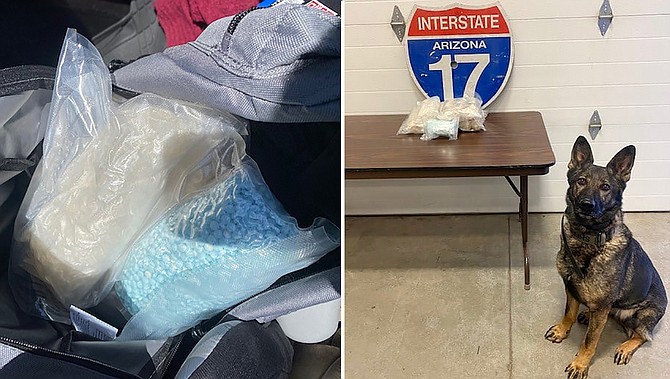 A YCSO K-9 was deployed during a traffic stop near Interstate-17 in the Cordes Junction on Wednesday, March 10, 2021. The dog alerted deputies to 10,000 fentanyl pills and 10 pounds of methamphetamine. (YCSO)

YCSO deputies then pulled over Moreno-Sanchez near Interstate-17 in the Cordes Junction area for a traffic violation. According to YCSO, the deputy noticed inconsistencies during the conversation with Moreno-Sanchez. A YCSO K-9 was deployed and alerted deputies that drugs were inside the vehicle.

During a third case on I-17, a YCSO deputy stopped a car for reckless driving. There were two people inside the vehicle, driver Sanchez-Lopez and passenger Julian Salazar-Luna.

After observing multiple suspicious behaviors of the two occupants, the deputy asked for and was granted permission to search the vehicle. Inside the vehicle, deputies found 46 pounds of methamphetamine individually wrapped in one-pound bundles. Both men were arrested and charged with transportation of dangerous drugs for sale. 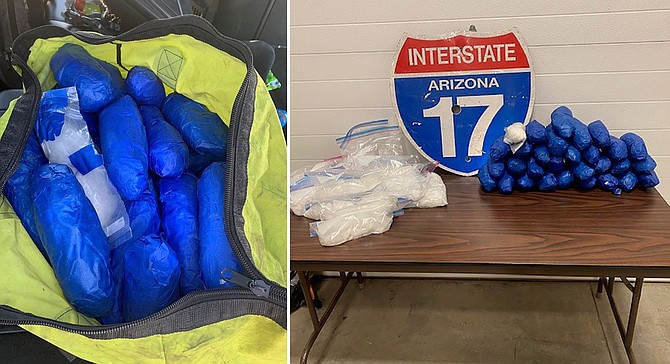 During a March 10, 2021, reckless-driver traffic stop on Interstate 17 a deputy discovered 46 pounds of methamphetamine individually wrapped in one-pound bundles. The two men in the vehicle had consented to the search. They were arrested and charged with Transportation of Dangerous Drugs for Sale. (YCSO)

“The struggle around addiction is very real,” YCSO Sheriff David Rhodes said. “Tuesday, three people overdosed in Cottonwood. Fortunately, first responders were able to revive them and buy them precious time. People like these four drug dealers don’t value human life and I’m glad our deputies and PANT detectives acted so quickly in getting them and their drugs off our streets.”