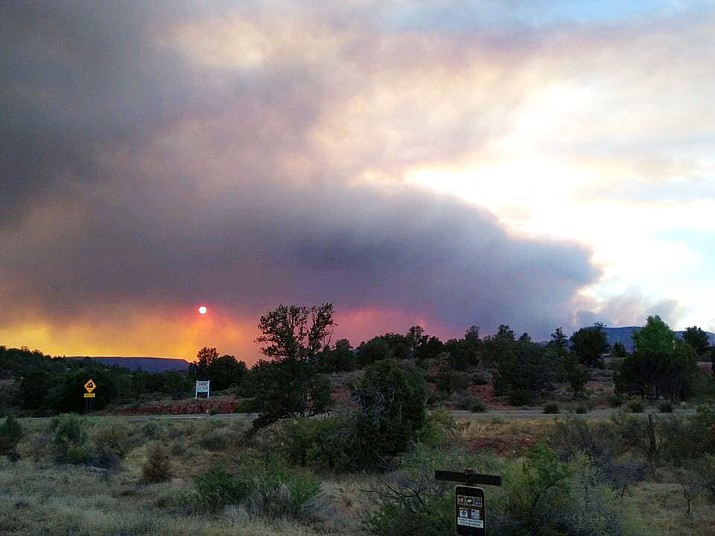 Smoke rises from the Rafael Fire on Sunday, June 27, 2021. The photo, taken from Highway 89A in west Sedona, shows the smoke drifting toward the quad-city area, which had heavy smoke Sunday evening. (YCSO/Courtesy)

The Rafael Fire remained at 78,708 acres as of Tuesday night, with 72% containment, and 596 firefighters were battling the blaze, according to a Prescott National Forest Service news release.

Monday on the north side of the fire, crews were heavily engaged in securing the fire by patrol and mop-up activities.

“All perimeter firing operations are substantially complete, but smoke from burning interior fuels will continue for a few days,” a news release stated. “Heavy smoke may settle into canyon bottoms and low elevation communities in the Verde Valley over the next few nights.” 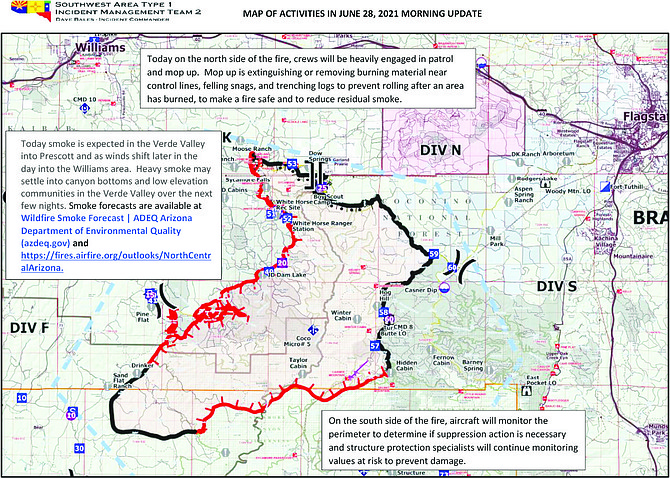 On the south side of the Rafael Fire, aircraft will monitor the perimeter to determine if suppression action is necessary and structure protection specialists will continue monitoring values at risk to prevent damage. Firefighters are prepared for initial attack over the next few days as the probability of thunder storms and lightning increases.

“As containment increases some crews and equipment are no longer needed, and will be released for reassignment or rest and recuperation,” the news release stated.

The following notifications were in place as of 6 a.m. Monday.

Maps of evacuation status in Coconino County can be found at arcgis.com.

For information on evacuation status, and fire activity, there will be a virtual community meeting every day at 6 p.m. until further notice, on the Incident Facebook page: https://www.facebook.com/RafaelFireInfo/.

As of Sunday, June 27, management of the five Rock Butte fires north of Paulden and West of Highway 89 had transitioned to a Type 4 team. The fire managers’ main objective is to patrol and monitor all the fires in the Rock Butte Fire area. Crews will continue to check the fire perimeters and be available for initial attack if afternoon thunderstorms bring lightning. Resource advisors report that the fire lines are in good condition.