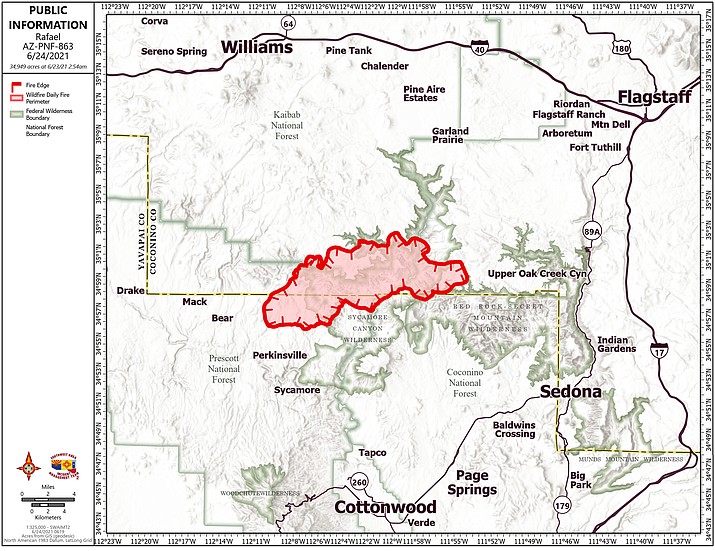 This map from the Prescott National Forest shows the footprint of the Rafael Fire, as of June 24, 2021. (Courtesy)

The Rafael Fire, located four miles north of Perkinsville, has increased in size to 36,143 acres, according to the Thursday evening update from Prescott National Forest officials.

As of late Thursday night, the fire was zero-percent contained. It started Friday, June 18, and has damaged or destroyed no structures, said Debbie Maneely of the Prescott National Forest.

The lightning-caused fire has 311 personnel working it, she added.

The Rafael Fire has advanced into Sycamore Canyon and moved on top to the Mogollon Rim, on both the Kaibab National Forest on Sycamore Point and Coconino National Forest near Casner Mountain.

On the Prescott National Forest, the southwest corner of the fire has not advanced west or south for the past two days, Maneely said.

Wednesday, to the north on the Kaibab and Coconino National forests, fire crews identified road systems to utilize as fire line to stop the spread north and westward toward identified values at risk.

On the southeast portion of the fire in Sycamore Canyon and the Red Rock Secret Mountain Wilderness, crews are identifying fire line locations for direct and indirect suppression actions.

The fire was expected to move north in Sycamore Canyon near Dorsey Spring and east into Red Rock Secret Mountain Wilderness area, where vegetation and topography are in alignment, according to a news release.

Firefighters on the north end of the fire will continue with suppression efforts and prepare for future firing operations using road systems and natural features and will utilize aircraft to support these actions. In the Red Rock Secret Mountain Wilderness area, fire crews will continue to scout for future suppression lines.

“GO” — in Coconino County, areas around Sycamore Canyon and south of Forest Service Road 535 off FS 231. In Yavapai County, some rural ranches in the area of North FSR 525 and Bill Grey Road, West of Sedona.

“READY” — none at this time. Notifications can change rapidly. Residents in areas affected by the fire should remain vigilant and be prepared to evacuate. Evacuation notifications are issued when danger is imminent and life threatening.

As of June 24, the five fires being managed by the Arizona Central West Zone Type 3 Incident Management team are the following from north to south — all acreages are approximate and current as of June 23 at 8 p.m.:

Location: North of Paulden and west of Highway 89

The moisture and higher relative humidity subdued fire behavior on all five fires. Crews were able to get 100% containment on the Red Hat and Limestone fires, and 42% containment on the Spring Fire. Crews will continue to patrol and monitor both the Silent and Rock Butte fires. Interior fuels on the Spring Fire continue to burn and smoke may be visible.

Wednesday’s storms brought some much-needed relief for crews on the Rock Butte fires. With considerable rain and lightning on the fire area, crews were brought off the line for their safety. This gave them a chance to regroup physically and mentally. This reprieve gave the crews the opportunity to recharge their stamina for both this assignment as well as the next assignment.

Evacuation status as of 6 a.m. June 25 (Notifications are in place until status is rescinded or changed by each respective County Sheriff’s Office):

“GO” in Coconino County, areas around Sycamore Canyon and South of Forest Service Road 535 off FS 231 (Sycamore Canyon) and Garland Prairie South. In Yavapai County, some rural ranches in the area of North FSR 525 and Bill Grey Road, West of Sedona (Loy Ranch). A shelter for evacuees is set up at Sinagua Middle School at 3950 E. Butler in Flagstaff.

“READY” -– in Coconino County, all areas south of I-40, west of I-17 including the following neighborhoods:

Notifications can change rapidly. Residents in areas affected by the fire should remain vigilant and be prepared to evacuate. Evacuation notifications are issued when danger is imminent and life threatening.