Rafael Fire notches up to 24,000-plus acres charred, still 0% contained 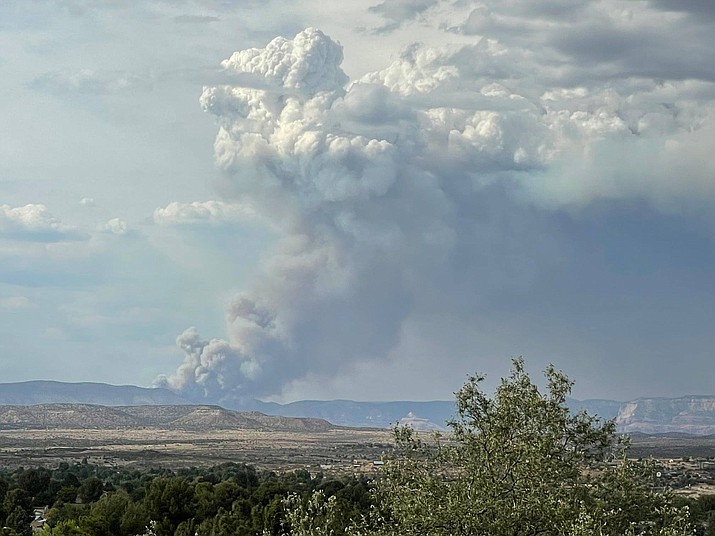 After exploding to 20,000 acres just 24 hours earlier, the Rafael Fire in Yavapai County, just four miles north of Perkinsville, had “considerably less growth” than the day before, according to Prescott National Forest officials Tuesday.

The Rafael Fire, which had burned an estimated 24,064 acres as of Tuesday morning, June 22, was “less erratic than the previous day,” fire officials said in a news release.

The lightning-caused blaze was zero percent contained as of Tuesday morning.

At 24,064 acres, the Rafael fire spans the Prescott, Kaibab, and Coconino National Forests as well as the Yavapai and Coconino county lines. “Reconnaissance from the air is the best approach for fire managers to assess fire management strategies in the remote terrain in and around Sycamore Canyon Wilderness,” Prescott National Forest spokesperson Debbie Maneely stated in a news release Tuesday. “Steep canyons walls and dense vegetation are driving the options for fire management.”

On Tuesday, crews assessed and prepped containment lines on the northeast portions of the fire. The fire was backing down into Tule Canyon, but had not reached the bottom.

“On the northeast portion of the fire, crews will be prepping fire lines from Sycamore Point to Pine Ridge,” Maneely added.

Crews worked on the south and east flanks of the Spring Fire on Tuesday, while the north and west sides continue to be hot and active.

There is currently a fire area closure order on the Prescott National Forest for the area surrounding the Rock Butte Fires west of Highway 89. Both the Kaibab and Coconino National Forests will be implementing full forest closures effective at 8 a.m. Wednesday, June 23.

Stage 2 fire restrictions are already in place on the Prescott, Kaibab and Coconino national forests.