Update: Rafael Fire grows to more than 24,000 acres
YCSO: No Yavapai County residents are under evacuation 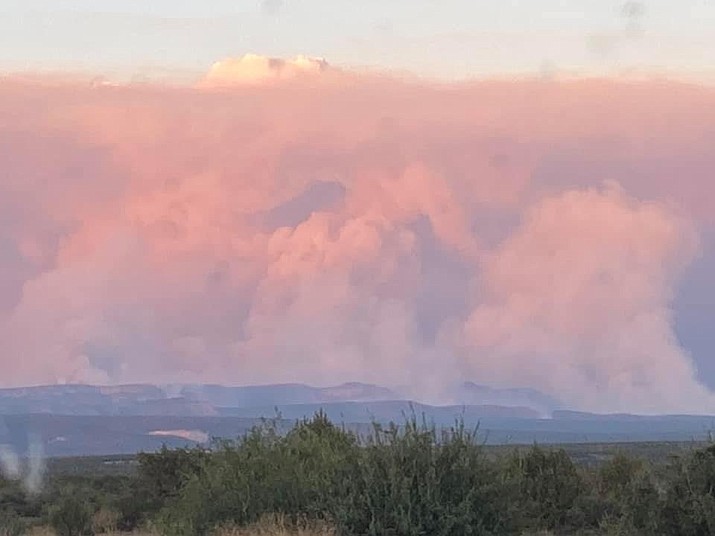 Smoke covers the distant mountains in Perkinsville as the Rafael Fire grew to nearly 20,000 acres Monday, June 21, 2021. The Rafael Fire is burning four miles north of Perkinsville in Yavapai County and east of Highway 89. (YCSO/Courtesy)

The six fires being managed by the Arizona Central West Zone Type 3 Incident Management team are the following [from north to south — all acreages are approximate and current as of June 21]:

Location: north of Paulden and west of Highway 89

Location: 4 miles north of Perkinsville and near Sycamore Canyon

The Yavapai County Sheriff's Office reported at about 2 p.m.: "At this time, no Yavapai County residents are under evacuation order for this fire and no Yavapai County homes are in danger. Coconino National Forest is closed. Road closures will be in effect, beginning this afternoon, along Hwy 89A at Bill Gray Road and FSR 525," in reference to the Rafael Fire.

The Rafael Fire, which is east of Highway 89, was estimated to be 10,000 acres Sunday, June 20, but has nearly doubled in size since then, according to a news release from Prescott National Forest spokesperson Debbie Maneely on Monday, June 21.

The Rafael Fire, which started as four small fires after last week’s lightning storm, became one large fire after Sunday’s winds and extreme conditions, growing from 400 acres to nearly 20,000 acres and engulfing the other adjacent smaller fires.

It is currently 0% contained. 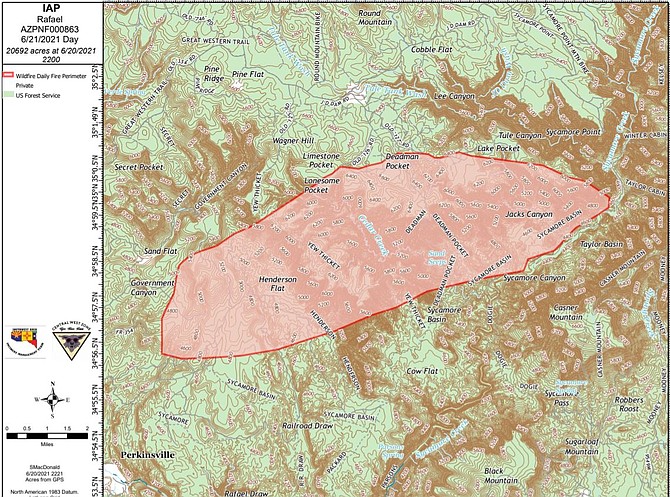 A map of the Rafael Fire just four miles north of Perkinsville in Yavapai County on Monday, June 21, 2021. (Prescott NF/Courtesy)

Due to the complexity of the Rafael Fire, a Type 1 team has been ordered and will arrive later this week to take over management of the fire. Meanwhile the Arizona Central West Zone Team will continue to work with all entities on these fires. The current Incident Management Team is also in contact and coordination with emergency management personnel from both Yavapai and Coconino counties, according to a news release.

The Silent Fire, north of Paulden and west of Highway 89, is currently at 45 acres.

Garland Prairie is reminded to be in ready mode, according to fire officials.

Hot and very dry conditions are expected this week with temperatures peaking in the afternoons in the mid 90s and overnight to early morning temps in the 60’s, relative humidity is about 9%, winds out of the southwest at 10 to 15 MPH with gusting up to 25 to 30 mph. There is a 0% chance for precipitation to occur in the area.

There is currently a closure order for the area surrounding the Rock Butte Fires west of Highway 89. Fire managers are working on developing a closure area for the Rafael Fire area.

Stage 2 fire restrictions are in effect on the Prescott, Kaibab and Coconino National Forest land, and around Arizona.