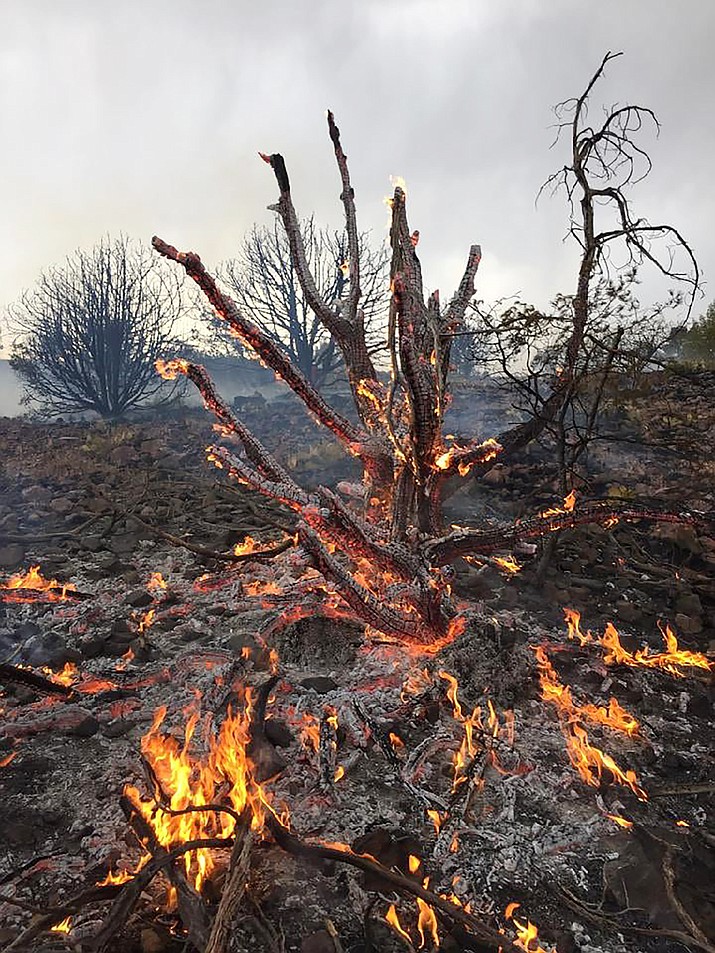 The Prescott National Forest and a variety of fire teams, including two hotshot crews, have been fighting as many as eight fires that resulted from lightning since Thursday, June 17, 2021. (Courtesy)

These started Thursday, June 17, and about 24 hours ago the Rafael was only 9 acres. Other changes are the Sandflat, down from 5 acres; Archibald, down from 3 acres; and the Hornet, still at 1 acre, according to news releases from Debbie Maneely of the Prescott National Forest.

These are lightning-caused fires burning in pinyon juniper and grass.

"The rugged terrain and remote access to the fire perimeter is driving the indirect fire management strategy. Fire managers’ main objective (Sunday) is to prepare roads and trails for potential firing operations tactics," Maneely wrote Sunday. "This will allow fire managers to respond to the dynamic environment of fire. The main safety concerns are extreme heat and thunderstorms in the area." 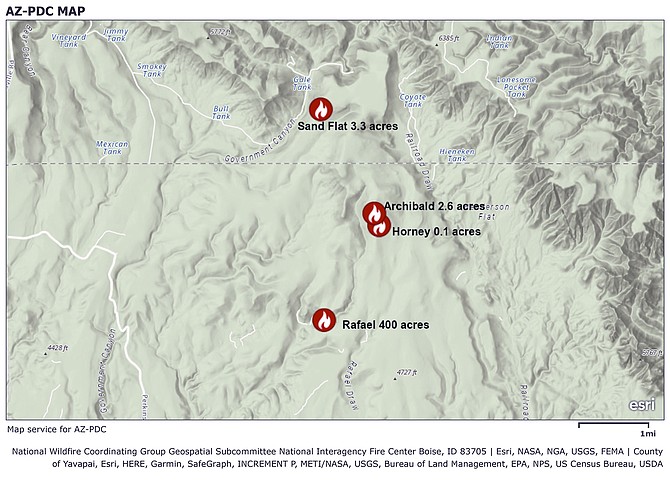 Weather: Hot very dry conditions through Tuesday with temperatures peaking in the afternoons in the high 90s and overnight temps in the 60s, daytime winds from the west gusting to 30 mph, shifting in the evening to the southwest reducing to around 10 mph. There is a zero-percent chance for precipitation to occur in the area through Tuesday.

Closures: None at this time.

• If You Fly, We Can’t (drones are not allowed near or over fires); and,

• Stage II Fire Restrictions are in effect across the Prescott National Forest.

Fire crews are dealing with eight fires across the north end of the Chino Valley Ranger District of the Prescott National Forest since Thursday, June 17.

Their percent of containment varies, and all were started from lightning in grass, brush and pinyon juniper, she stated Saturday afternoon.

“Fire managers’ main objective (Saturday) is determining access routes for the various fires. Yesterday, they were able to put retardant on several of the fires. All of the fires were started by the lightning storm that passed through on Thursday,” she said. “Due to the extreme drought conditions, all fires are being managed in a full suppression mode. Some of the fires are in remote locations and are being monitored via air until ground crews can gain access.”

The Silent and Rock Butte fires are just north of Paulden. The Yavapai County Sheriff’s Office has issued a “ready status for the area north of Paulden. Under ‘ready’ conditions, residents are asked to stay informed through local media and public safety officials. (https://www.facebook.com/YavapaiCountySheriff/).”

Resources on the fires includes one air attack, one type-3 helicopter, three engines, two hotshot crews and one fire crew.

Weather does not appear to be helping, with hot and very dry conditions through Sunday with temperatures peaking in the afternoons around 100 and overnight to early morning temps in the 60s, the news release states. Relative humidity is expected to range from 10% to 30%, with winds out of the east at 5 mph, shifting in the afternoon to the west up to 20 mph. There is a zero-percent chance for precipitation to occur in the area.

There are no road or access closures at this time, Maneely said, adding that Stage II Fire Restrictions are in effect across the Prescott National Forest and all of Yavapai County.