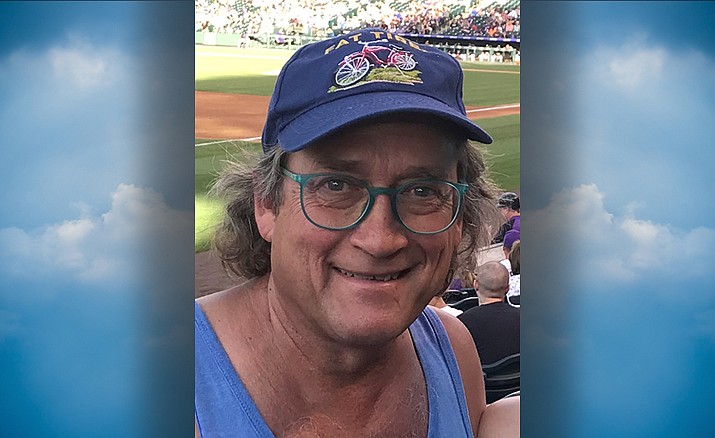 Robert Max Lind, born April 27, 1958 in Phoenix, Arizona, died unexpectedly on June 13, 2021 in Prescott, Arizona at the age of 63. He was the best dad to Jasmine (Chris), Travis, and Margaret. His grandchildren Payson, Ryland, and Brecken will miss their Grandpa Bob. He is survived by his father, Max (Judy); older brother, Jeff (Jami), and little sisters, Susan (Tommy) and Tricia, who are comforted knowing Robert has joined their mother Jayne (Ed).

Robert adored many pets throughout his life. In his last years he embraced being a “dog dad” to his dear Gusto and Mariah, as well as to his cat, Lil’ Girls. He was lucky enough to have three living grand-dogs, Cooper, Sedona, and Stone, as well as grand-cats, Puck, Pudge, and Oliver.

Robert will be remembered for his lifelong talent as a singer-songwriter and guitarist; he had many original songs with beautiful tunes and lyrics which were enjoyed by family and friends as well as people at open-mics, farmer’s markets, and Acker Music Night at Christmas time around the Prescott square. He was inspired by musicians such as Neil Young, John Prine, The Grateful Dead, and Jimmy Buffett. He is now having an epic jam session in the sky with his favorite musicians and family members.

Robert spent many years as a hardworking, skilled, artistic carpenter. Later in life, he impressed himself and his children by learning the skills for a new career installing satellite dishes. Ultimately, his greatest pride in life was his children and their accomplishments.

He was always a traveler, he preferred backpacking and camping. Some of his favorite places were Colorado, Mexico, and right at home in Prescott, always dreaming of the next adventure.

Robert loved his sports teams; his energy was felt the night he died as the Suns won, advancing into the semi-finals of the 2021 playoffs. He also found enjoyment in skiing, cooking, birdwatching, and curating a beautiful garden spanning his property for over 30 years.

Memories of Robert will always include his eccentric humor, non-judgmental nature, and optimism. He helped us all enjoy the simple things in life. He acted as a father and friend to many of his kids’ friends. He laughed at his own jokes, never reached the speed limit, and had several quirks and sayings which will live on through his family and friends. We will feel his spirit in the strum of guitars, the waves of the ocean, colorful wildflowers, and the warm breeze of the Southwest.

Robert’s Celebration of Life will be held at 1 p.m. Saturday, June 26, 2021, at Sheriff’s Posse Clubhouse, 1495 S. Sheriff’s Posse Trail, in Prescott, AZ 86303 and is open to all. Please wear a colorful Hawaiian shirt and bring memories of our dear friend Bob. If your heart wants to celebrate him, in lieu of cut flowers, please plant something special in his memory.

For never arriving anywhere on time, Dad both entered and left the earthly world prematurely. When Dad said or did something quirky, he always told us we filled out the wrong forms when applying for a dad. We absolutely filled out the correct forms. We love you about 8-million-billion. Have another beer, Dad. Group hug!