Haddad: My parting message taken from a Father’s Day poem 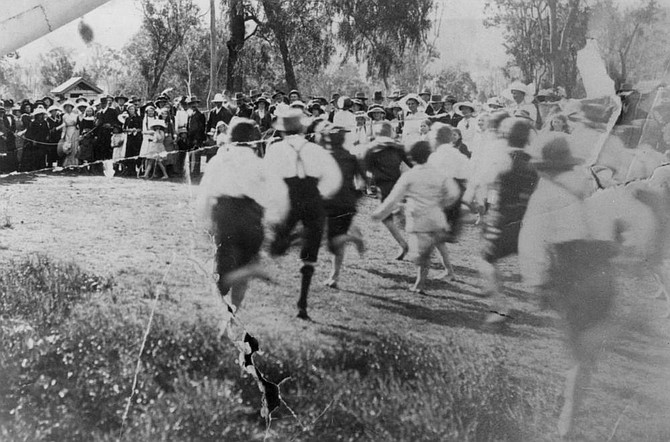 A crowd of spectators watch as children race toward a rope finish line. (National Archives photo, circa 1910)

As Father’s Day approaches, and as my last column in this newspaper before I change careers, I’d like to share one of my favorite poems by Dee Groberg. It’s not only a poem about perseverance and the power of a father on Earth, but it can also tell a story about purpose and individual worth as another Father watches his children running the races of life.

The Race, by Dee Groberg

Quit! Give up! You’re beaten, they shout at me and plead.

There’s just too much against you now. This time you can’t succeed.

My downward fall is broken by the memory of a race.

Excitement sure! But also fear. It wasn’t hard to tell.

They all lined up so full of hope each sought to win that race.

Or tie for first. Or if not that, at least take second place.

And fathers from off the side, each cheering for his son,

And each boy hoped to show his dad that he would be the one.

The whistle blew and off they went, young hearts and hopes afire.

To win and be the hero was each young boy’s desire.

And one boy in particular, whose dad was in the crowd,

Was running near the lead and thought, “My dad will be so proud.”

But as they speeded down the field across a shallow dip

The little boy who thought to win, lost his step and slipped.

Trying hard to catch himself, his hand flew out to brace.

Amid the laughter of the crowd, he fell flat on his face.

So down he fell and with him hope. He couldn’t win it now.

Embarrassed, sad, he only wished to disappear somehow.

But as he fell, his dad stood up and showed his anxious face,

Which to the boy so clearly said, “Get up and win the race!”

He quickly rose, no damage done, behind a bit, that’s all,

And ran with all his mind and might to make up for his fall.

So anxious to restore himself to catch up and to win

His mind went faster than his legs, he slipped and fell again.

He wished then he had quit before with only one disgrace.

But in the laughing crowd he searched and found his father’s face.

That steady look which said again, “Get up and win the race!”

So up he jumped to try again, ten yards behind the last.

“If I’m going to gain those yards,” he thought, “I’ve got to move real fast.”

Exerting everything he had he regained eight or ten,

But trying to recapture the lead he slipped and fell again.

Defeated, he lay there silently, a teardrop from his eye.

“There’s no sense running any more. Three strikes. I’m out. Why try?

But then he thought about his dad who soon he’d have to face.

“Get up!” an echo sounded long. “Get up and take your place!

“You were not meant for failure here. Get up and win the race!”

So up he rose to run once more and with a new commit,

He resolved that, win or lose, at least he wouldn’t quit.

So far behind the others now, the most he’d ever been.

Still he gave it all he had and ran as though to win.

Too far behind to hope to win, but still he ran to the end.

They cheered the winning runner as he crossed the line first place,

Head high and proud and happy, no disgrace.

But when the fallen youngster crossed the line, last place,

The crowd gave him the greater cheer for finishing the race.

And even though he came in last with head bowed low, unproud.

You’d have thought he’d won the race to listen to that crowd.

Thank you for reading my columns and stories all these years. I wish you all the best.

See related column: Applying the folktale of The Little Cow