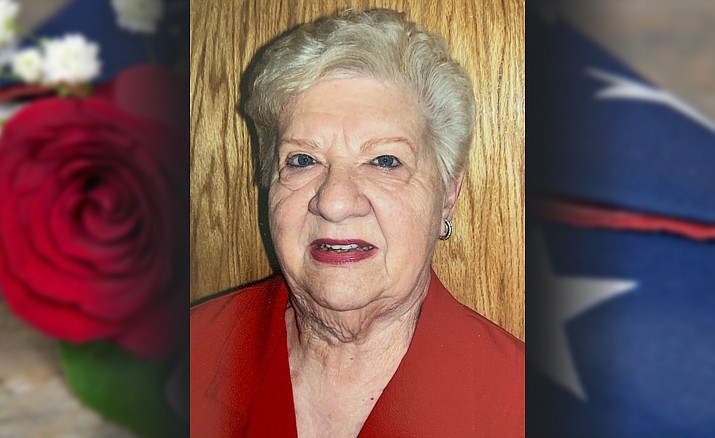 Christine Marie Johanna Guthrie died at the age of 98 on May 19, 2021, at Prescott Valley Samaritan Center.

Christine Marie Johanna Guthrie died at the age of 98 on May 19, 2021, at Prescott Valley Samaritan Center. Chris was born in Toledo, Ohio to Louis Krueger and Ethel Krueger on July 4, 1922. She was baptized at home on July 29, 1922 and confirmed at Peace Lutheran Church in Toledo on April 5, 1936.

After graduating from Swanton High School in 1940, she worked at various jobs, eventually making bushing for airplane engines during the war until she was old enough to join the Navy without her parents’ consent. She served in the Navy WAVES from January 1944 until April 1949 as a Hospital Corpsman 1st Class. It was while she was stationed at the U.S. Naval Hospital in Portsmouth, NH that she met the love of her life, Charles M. Guthrie. Chris and Chuck were married on Nov. 6, 1948 at Peace Lutheran Church in Toledo.

Chris worked at the 11th Naval District Public Works, Miramar Naval Air Station, for a top secret control officer. She retired after a total of 30 years with the US Government, of which 20 years was with the IRS, retiring as an auditor. During Chuck’s Navy career they lived in Maine, New Hampshire, Virginia, Pennsylvania and California. After retirement, Chris and Chuck moved to San Felipe, Baja, CA, followed by Grant’s Pass, Oregon. Eventually, the lack of sunshine in Oregon got to Chris, so she and Chuck finally settled on moving to Prescott Valley in September, 1993. They both became members of Christ Lutheran in 1997.

Chris loved to read, do crossword and jigsaw puzzles and she was considered a gourmet cook. She enjoyed traveling with a group and with Chuck for many years. During her time in San Felipe, happiness was found when fishing the Sea of Cortez.

Chris is interred next to her beloved Chuck at the Prescott National Cemetery.