'Ring of fire' solar eclipse will light up sky for some areas of the US on Thursday, June 10 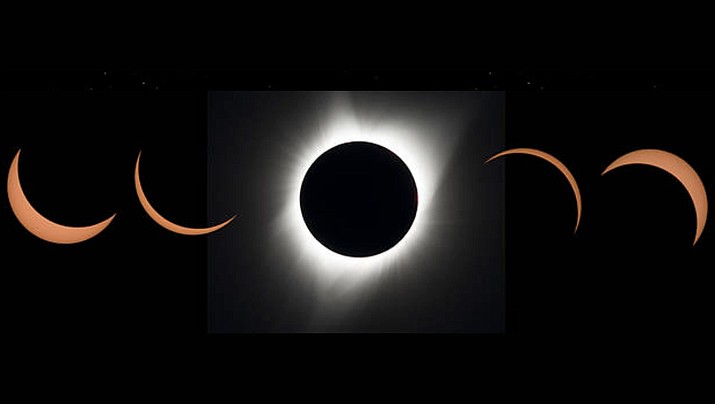 On Thursday, June 10, the moon will partially block out the sun to create a "ring of fire" solar eclipse. This event will not be visible in Arizona. (NASA/Courtesy)

On Thursday, June 10, 2021, people across the northern hemisphere will have the chance to experience an annular or partial eclipse of the Sun. This Annular Solar Eclipse is not visible in Arizona.

According to NASA, a solar eclipse happens when the Moon moves between the Sun and Earth, casting a shadow on Earth, fully or partially blocking the Sun’s light in some areas. During an annular eclipse, the Moon is far enough away from Earth that the Moon appears smaller than the Sun in the sky. Since the Moon does not block the entire view of the Sun, it will look like a dark disk on top of a larger, bright disk. This creates what looks like a ring of fire around the Moon.

"In some places, viewers won’t get to see this ring around the Moon." NASA explains on their website, nasa.gov. "They’ll instead experience a partial solar eclipse. This happens when the Sun, Moon, and Earth are not exactly lined up. The Sun will appear to have a dark shadow on only part of its surface."

In the U.S, the partial eclipse will be visible along parts of the Southeast, Northeast, Midwest, and in Northern Alaska. In many of these locations, the eclipse will occur before, during, and shortly after sunrise. This means that viewers will need to get a clear view of the horizon during sunrise in order to see the eclipse.

To see exactly where the eclipse will be visible, visit NASA's animations and maps from NASA’s Scientific Visualization Studio at https://svs.gsfc.nasa.gov/4910.

To learn which times the eclipse may be visible in certain areas, you can click anywhere on the map at this link, https://eclipse.gsfc.nasa.gov/SEsearch/SEsearchmap.php?Ecl=20210610.

(Note that the maximum obscuration and maximum eclipse timing noted on the map may occur before sunrise in many locations.)

Download a fact sheet to learn more about eclipses, how to view them safely, and fun eclipse activities at https://www.nasa.gov/sites/default/files/atoms/files/evergreen_eclipse_flyer_english.pdf.

Weather permitting, a view of the partial solar eclipse will be streamed on YouTube and on nasa.gov/live. This stream is courtesy of Luc Boulard of the Royal Astronomical Society of Canada Sudbury Centre. Visit, https://www.youtube.com/watch?v=HMgKCOm4uOQ.

The stream will start at 5 a.m. EDT. Since sunrise isn’t until 5:47 a.m. EDT, the stream will be dark until then. The eclipse will be nearly at maximum (~90 percent coverage) at sunrise, so viewers can watch the Sun reappear as the Moon moves out of the way. This stream will show the partial, not annular, solar eclipse.

How to Safely Watch an Annular or Partial Eclipse

It is never safe to look directly at the Sun's rays, even if the Sun is partly or mostly obscured. When watching a partial solar eclipse or annular solar eclipse, you must wear solar viewing or eclipse glasses throughout the entire eclipse if you want to face the Sun. Solar viewing or eclipses glasses are NOT regular sunglasses; regular sunglasses are not safe for viewing the Sun.

If you don’t have solar viewing or eclipse glasses, you can use an alternate indirect method, such as a pinhole projector. Pinhole projectors shouldn’t be used to look directly at the Sun, but instead to project sunlight onto a surface. Read a how-to guide for creating a pinhole viewer at this link, https://www.jpl.nasa.gov/edu/learn/project/how-to-make-a-pinhole-camera.