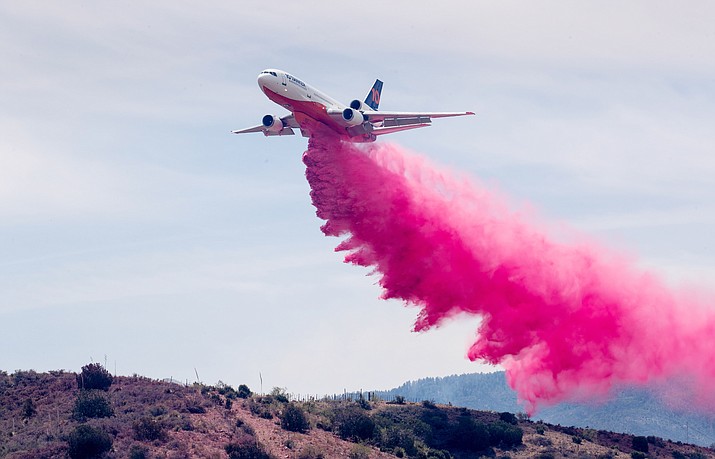 Due to increasing fire danger in the Prescott area and Yavapai County, the Prescott Fire Department (PFD), Central Arizona Fire and Medical Authority (CAFMA), Prescott National Forest, along with the Yavapai County Board of Supervisors, announced in joint news releases that they will implement Stage II fire restrictions beginning at 8 a.m. Friday, June 11.

These additional fire restrictions will remain in effect until forest officials determine that conditions have changed sufficiently to reduce the risk of human-caused wildfire.

Stage I fire restrictions were implemented on May 14.

“Here’s a message that we want to get out to folks about wildfire season: It’s no longer a season. It’s just year-round,” CAFMA Fire Chief Scott Freitag said. “Fire has become a danger throughout the entire year, which is a change and with the drought, it’s what we’re fighting today.”

• No burn permits will be issued-residential or commercial.

• Use of model rockets is prohibited.

• Use of fireworks and other pyrotechnic displays are prohibited except by commercial special events permit.

• No smoking outside of vehicles, outside of residential yards, or outside of designated smoking areas.

• No outdoor use of firearms.

• Welding, cutting and grinding is prohibited (Permission may be granted under special circumstances and repair situations as approved by the Fire Marshal).

• Chainsaws or other equipment powered by an internal combustion engine between the hours of 9 a.m. to 8 p.m. are prohibited. However, chainsaws are allowed with a spark arrestor, water or fire extinguisher and a fire watch.

• Warming fires, camp fires, as well as charcoal and wood burning barbecues (ember and ash producing) are prohibited in all locations. This also prohibits the use of other devices that produce open flame such as Tiki lamps.

• The use of propane, natural gas or other gas flame-producing barbeque cooking grills or fire pits may be used as long as they are constantly attended, are in an enclosed device, and can be turned off.

• A fire department permit for a specific time period, location, and activity granting permission to conduct such activity in a safe manner.

• A fire watch, an individual for the sole purpose of watching for any sparks and/or ignition.

• Firefighting tool(s) such as a shovel.

Exemptions to the restrictions include the following:

• Persons with a written Forest Service authorization specifically exempting them from the effect of this order.

• Persons operating generators with an approved spark arresting device in an area that is barren or cleared of all overhead and surrounding flammable materials within three feet of the generator.

• Any federal, state, or local officer, or member of an organized rescue or firefighting force in the performance of an official duty.

Freitag also advises that drivers ensure chains or any other object that can ignite a spark are not dangling from a vehicle while it’s in motion.

CAFMA’s jurisdiction also applies to areas surrounding the City of Prescott such as Williamson Valley, upper Copper Basin Road, the Mountain Club area, Ponderosa Park off of White Spar Road, and the Senator Highway area of Karen Drive, Sweet Acres, and Oak Knoll Village along with the areas of Government Canyon and Diamond Valley which are south of Prescott.

Additionally, Prescott National Forest lands and the unincorporated areas of Yavapai County not protected by fire districts or area fire departments will also be affected.

“82% of the wildland fires that we see are human cased,” Freitag said. “To that end, we need to ensure that people are educated, and making the right decisions and maintaining situation awareness … There’s a lot of things that we can do to avoid starting wildland fires.”

KNOW BEFORE YOU GO

The public can obtain current state and federal fire restrictions information across Arizona on the Arizona Interagency Wildfire Prevention and Information website at wildlandfire.az.gov.

The map is a culmination of work from federal, state, and local agencies who hope to explain to the public where it is safe to have fires and where it’s not. The map shows all fire restrictions in New Mexico and Arizona, regardless of jurisdiction.