Jacob Guerrero, 31, of Tucson was a free-spirit who loved long-distance bike rides and much more. He was experimenting with marijuana and cocaine, and assured his mother he wasn’t an addict and was cautious about what he ingested. (Courtesy photo)

Jacob Guerrero of Tucson in May 2020 was a free-spirit who loved long-distance bike rides, tennis, hikes in the backwoods, even cooking hamburgers amid area rock formations.

At 31, he was working full-time and savoring life — albeit experimenting with marijuana and cocaine in ways that frightened his mother, Theresa. But he assured his mother he wasn’t an addict and was cautious about what he ingested.

The Cupp family holds a T-shirt tribute to their daughter, Hannah Mae Cupp, who died of fentanyl intoxication on March 22, 2020. She was 17. Pictured are parents Mike and Sommer Cupp with 12-year-old sister, Randi, center. According to MatForce’s Overdose Fatality Review Board report, fentanyl was detected in the system of 42 of the 82 deaths chronicled. (Nanci Hutson/Courier, file)

Hannah Cupp was a 17-year-old Prescott Valley teen who wanted to become a hairdresser. A loving daughter and big sister in her family, Hannah was an independent-minded soul with a big heart who her parents said dabbled with some drugs but never with any intent of making it a habit or harming herself.

The deaths of 19-year-olds Gunner Bundrick, left, and Jake Morales have been ruled an accidental overdose of illicit drugs and fentanyl intoxication, according to a Yavapai County Medical Examiner report. Both men were 2017 graduates of Bradshaw Mountain High School, and heavily involved in athletics. (Courier file photos)

Jake Morales was a 19-year-old Yavapai College student and accomplished baseball player and athlete known for his easygoing and upbeat personality and penchant for giving to others. On a weekend night two years ago, Morales and his friend, Gunner Bundrick, also a 19-year-old Yavapai College student and ball player — who were not drug users — experimented with some pills.

None of these promising young people get to finish their life story; their families are left to grieve the people they were and who they hoped they might become. All because of a deadly, poisonous, and often hidden drug — the illicit narcotic fentanyl that has become an epidemic because it is easily disguised in substances that some think could give them a thrill, not kill.

In Hannah’s case, her family was informed all she did was pick up a tablet dropped by a friend and somehow absorbed through her skin, or accidentally inhaled it, and she never woke up again.

And these families are far from alone — and one’s age doesn’t matter. Fentanyl doesn’t discriminate.

In 2020, the Prescott Valley Police Department reported 70 overdose calls tied to synthetic opioids — fentanyl is one of the deadliest. Of those, there were 18 deaths, three younger than 18.

To Theresa, fentanyl is a new “weapon of mass destruction.”

She is certain her son had no idea when he used cocaine with friends it might take his life.

Even when Theresa suspected her son might be hanging out with people who experimented with drugs, she said she couldn’t fathom a drug as potent as fentanyl was lurking in the shadows. Fentanyl has been used to lace prescription pills, cocaine, heroin, even marijuana, and for some their first try becomes their last.

Theresa and these other families are expected to be among many families and community members who on Sunday, June 13, will attend what will be the first fentanyl awareness/prevent event in the area that revolves around the stories from bereaved families. The title of the 9 a.m. to 4 p.m. program to be hosted in the Prescott Valley Civic Center, 7501 E. Skoog Blvd., is “Bereaved Family Day — Victims of Illicit Narcotic Poisoning.”

The event — organized by the mother of a 14-year-old who died a year ago of fentanyl poisoning, Amy Neville, who lives part-time in the San Tan Valley and in California — is free to the public and will begin with a 9 a.m. grief yoga class.

At 10 a.m., the official event will begin with guest speakers who will include Prescott Mayor Kell Palguta, a relative of Jake Morales. Family members are invited to share their stories; a microphone will be circulated so that they can do so if they so choose, organizers said. Grief counseling and other educational resources will be available to help better inform the public about the dangers.

Prescott Valley Vice Mayor Lori Hunt, who is active with the local Prescott Fentanyl Working Group, said she welcomes this event as a means of enlightening more families to the need to talk frankly, and frequently, to their children about how fentanyl is raising the stakes when it comes to use of any substance that is not prescribed to them by a medical doctor. 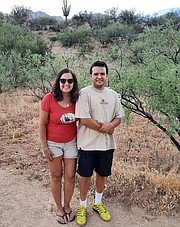 Despite the fact she is still in deep mourning for her son, Guerrero said she has publicly shared her story because she can’t bear to think of another parent suffering another such loss.

She said she will be attending this event to give and glean comfort from those who, tragically, are walking in her shoes.

Guerrero has talked with the Cupp family who has also been on the front lines of the battle against fentanyl so as to spare another family from experiencing the unimaginable loss of a child, spouse, sibling or friend. She is afraid that people just don’t know, or worse, don’t care about this illegal street drug. She wants teens to be aware they are not invincible, and to offer ways to reach out to their peers who might find themselves in a dangerous position or is aware of someone who might be in danger.

Neville, too, said that is her motivator.

“All we want to do is save lives,” Neville said. “We want to do for others what we couldn’t do for our own kids.”