Finding Faith: Search continues for 16-year-old swept away in flooding 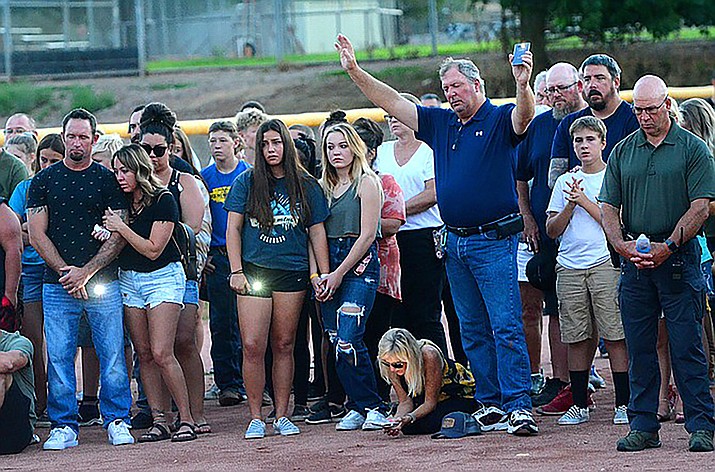 Hundreds of people from the Verde Valley turned out from the community on Monday, July 26, 2021, to join family members for a prayer vigil for Faith Moore, the 16-year-old who was swept away in the flood on Saturday night, July 24. (Vyto Starinskas/Independent)

COTTONWOOD – Faith brought hundreds of people out from the community Monday to pray with the family of Faith Moore, the 16-year-old who was swept away in the flooding in a wash on Camino Real on Saturday night.

Community leaders and pastors led the family, friends and strangers in prayer as the sun set on the Mingus High School softball field where she was joined by her team and coach in front of their dugout.

Earlier on Monday, July 26, more than 100 responders and community volunteers searched the Verde River and washes in hopes of finding the teen.

“Thank you to each and every one of you for being here, for praying,” Moore’s mother told the crowd. “For helping find our girl.”

“We are living through our darkest hours, but to have support is monumental and we just can’t thank you enough.”

“Dear Heavenly Father, lift up all the men and women who are serving as part of this search,” Verde Valley Fire District Chief Danny Johnson told the crowd. “Also lift up all the volunteers that are coming forth and I just pray for their safety.”

“Lord, and I know that there’s,” Johnson continued as he choked up for a few seconds, “I know there’s some public safety people that are struggling tonight, that you just comfort them, and lift them up.”

A National Guard Blackhawk helicopter joined search and rescue crews and K9 units Monday. Personal items belonging to the girl have been found.

“The search for Faith continues on the ground, on the water and in the air,” Johnson said.

Search crews with dogs and volunteers were in the wash Monday and Tuesday near Highway 260 downriver from where her car was found.

Volunteers are asked to check in at Mingus Union High School so the professionals can coordinate properly.

“For the safety of the volunteers and others, please do not attempt to search on your own without first speaking to command staff, and again thank you to everyone who has given their time and their hearts to helping.”

Johnson said at the peak there were a few hundred volunteers on Sunday but it became a concern because of unstable footing, lots of mud and threat of more rain.

“They operated throughout the night,” the chief said.

People can donate food or drink at the high school, Johnson said. The donations have been much appreciated.

“Faith and her family have strong ties to the community,” Johnson stated on a post to the VVFD Facebook page. “She is the granddaughter of the recently retired fire chief from the Verde Valley Fire District and the retired EMS chief from Verde Valley Ambulance, also the niece of an active Cottonwood firefighter.”

Saturday night, July 24, Verde Valley Fire was simultaneously working five other water rescues at the time of the call from the girl, including a K9 officer unit from Cottonwood, who was also washed downstream in a different wash a short distance from 16-year-old Faith Moore.

Moore originally called 911 at approximately 9:30 p.m. Saturday asking for help because her car was stranded in knee-high water, according to a news release from YCSO.

Initial crews were able to make visual contact with her, but during the rescue attempt she was swept out of her car and downstream. Though the water was only to her knees at the time she called for help, the water quickly rose to over 8 feet within an hour, YCSO stated.

There are drones from Sedona Fire, Verde Fire, DPS, and YCSO currently in the air as well as YCSO swift water rescue teams. YCSO K9 units are en route and a private search and rescue K9 is on scene assisting with the search.

An airboat from Maricopa County Sheriff’s Office has been deployed at Alcantara. This search is being coordinated with Prescott National Forest, and a helicopter from Guardian Air is involved in the search.

Verde Valley public safety partners, as well as the YCSO, remind the public to please be aware of running water in road crossings and to remain vigilant near the Verde River in light of the stormy weather.

The Verde Independent is a sister publication to The Daily Courier.