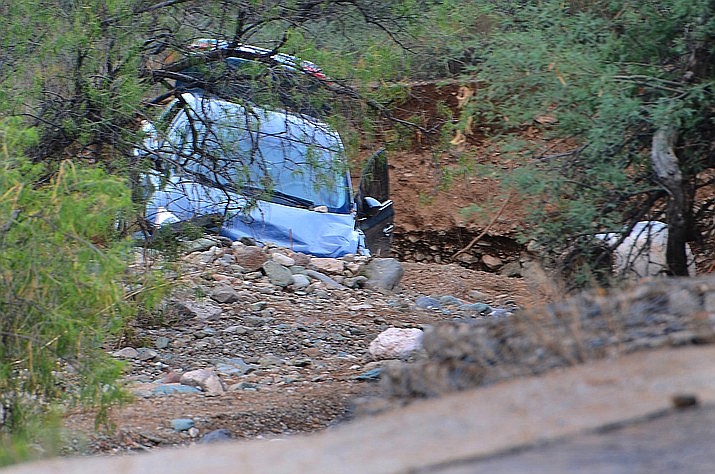 Search teams have fanned out from this vehicle in a wash just off Camino Real in the Verde Valley, as they look for a 16-year-old girl who was swept away in a flood Saturday night, July 24, 2021. (Vyto Starinskas/Verde News)

Search efforts are still underway for a missing teen-age girl lost in a flash flood Saturday.

"Out of respect for the family we have been withholding the girl’s identity but we are now able to share with the public that the 16-year-old that was swept away in a wash in Cottonwood (Saturday) night is Faith Moore," the Yavapai County Sheriff's Office stated Sunday. "Faith and her family have strong ties to the community. She is the granddaughter of the recently retired fire chief from the Verde Valley Fire District and the retired EMS chief from Verde Valley Ambulance as well as the niece of an active Cottonwood firefighter.

"The search for Faith is continuing with K9 units and with search watercrafts. An incoming storm has hit the Verde Valley making the search more difficult, but fire and law enforcement will carry on their work keeping the safety of first responders foremost. Volunteers are being moved out of the area to avoid injury in the event of another flashflood."

Verde Valley public safety partners remind the public to please be aware of running water in road crossings and to remain vigilant near the Verde River in light of the stormy weather.

The girl originally called 911 at approximately 9:30 p.m. Saturday asking for help because her car was stranded in knee high water, according to a news release from the Yavapai County Sheriff’s Office.

Initial crews were able to make visual contact with the victim, but during the rescue attempt she was swept out of her car and downstream. Though the water was only to her knees at the time she called for help, the water quickly rose to over 8 feet within an hour, YCSO advised.

Personal items belonging to the girl have been found. 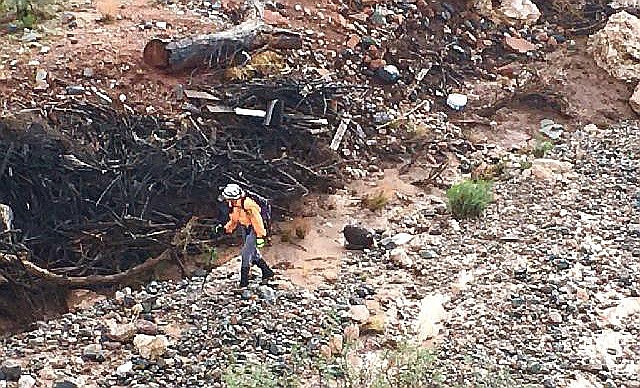 Flash flood warnings continue today, July 25, as rescue workers are working to locate a teen-age girl washed away during a rescue effort Saturday.

According to VVFD Fire Chief Danny Johnson, rescue crews were contacted at 9:40 p.m. Saturday concerning a vehicle stranded in a low-water crossing.

“During the attempts to contact the driver, a 16-year-old female was swept downstream,” Johnson advised in a news release. “The crews immediately deployed search teams that began searching downriver from Camino Real to the 260.”

The YCSO stated Sunday the girl originally called 911 asking for help because her car was stranded in knee high water. Initial crews were able to make visual contact with the victim, but during the rescue attempt she was swept out of her car and downstream.

Though the water was only to her knees at the time she called for help, the water quickly rose to over 8 feet within an hour, the Sheriff’s Office stated.

Johnson said that because of the rising waters and active storms, air support was not immediately available.

Personal items belonging to the girl have been found but heartbreakingly she has not yet been located, the Sheriff’s Office stated Sunday.

The incident command center for this search effort is located near Arrowhead Lane and Camino Real with additional support established along the 1700 block of South Highway 260.

On Saturday night, Verde Fire was simultaneously working five other water rescues at the time of the call from the girl, including a K9 officer unit from Cottonwood who was also washed downstream but managed to get out of the torrent. Ground searches were conducted throughout the night and continue Sunday, according to the YCSO.

There are drones from Sedona Fire, Verde Fire, DPS, and YCSO currently in the air as well as YCSO swift water rescue teams.

An airboat from Maricopa County Sheriff’s Office is being deployed at Alcantera. This search is being coordinated with Prescott National Forest, and a helicopter from Guardian Air involved in the search.

Anyone thinking they have useful information is asked to call 911.

Courier Editor Tim Wiederaenders contributed to this story. The Verde Independent is a sister publication to the Courier.