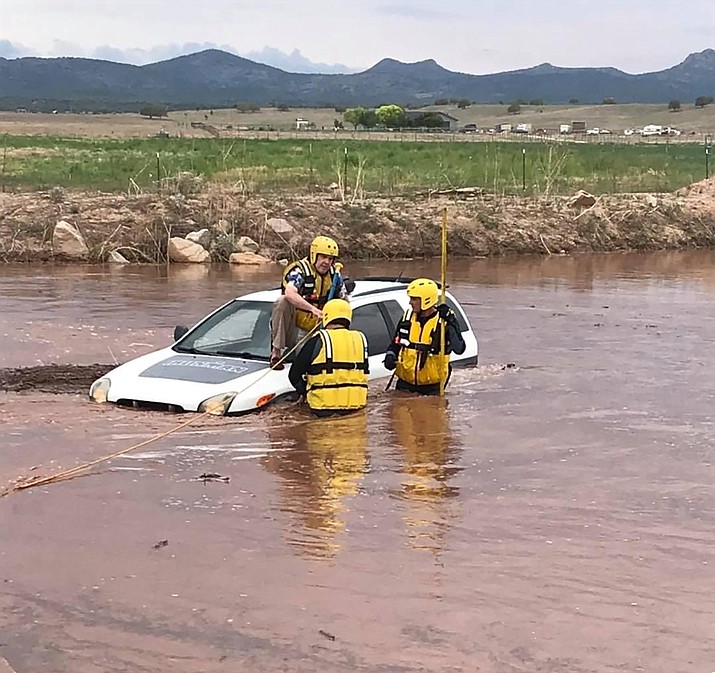 A Central Arizona Fire and Medical Authority technical rescue team helps a man from his car in a flooded area near Paulden on Friday, July 23, 2021. (CAFMA/Courtesy) 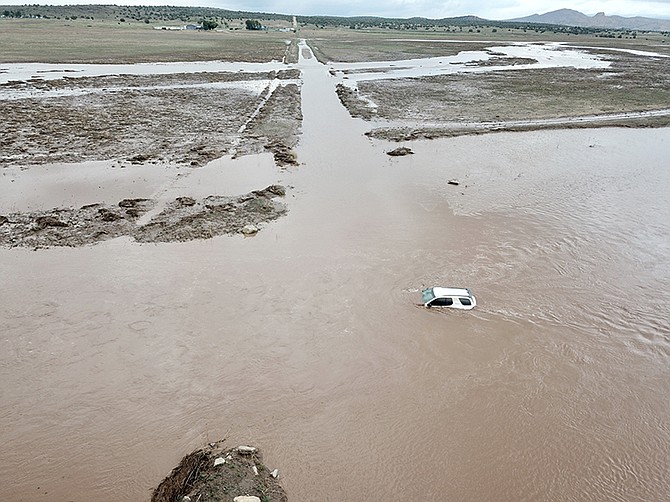 On Sweetwater Road, at the crossing of Big Chino Wash near Highway 89, where Depot 89 gas station is in Paulden, a driver "decided their car could swim." Photo taken with a Mavic Pro drone Saturday, July 24, 2021, at about 7 p.m. (John Carter/Courtesy)

Reader John Carter reported Saturday evening a driver took a chance on a flood, on Sweetwater Road at the crossing of Big Chino Wash near Highway 89 where Depot 89 gas station is in Paulden.

Flooding from a severe monsoon storm early Friday afternoon, July 23, closed Prescott Valley streets in the vicinity of Roundup and Viewpoint drives as well as Robert Road, from Tranquil Boulevard to Highway 89A, the Prescott Valley Police Department reported in the mid-afternoon.

And farther north, Central Arizona Fire and Medical Authority crews assisted a stranded motorist in Paulden after their vehicle became stuck in a flooded area.

Law enforcement officials were encouraging residents to avoid flooded areas, especially washes and low-water crossings. PVPD officials added that rather than attempting to drive through low-water crossings, you should turn your vehicles around. People have been known to drown in their vehicles from rising waters, PVPD added.

At about 3 p.m. Friday, the National Weather Service (NWS) in Flagstaff issued a flash flood warning for Yavapai County.

At 2:10 p.m., NWS officials had stated that Doppler radar showed thunderstorms producing heavy rain across the Quad Cities. Anywhere from 1 to 2 inches of rain fell in Prescott Valley. An additional quarter to three-fourths of an inch of rain was possible, NWS officials added. 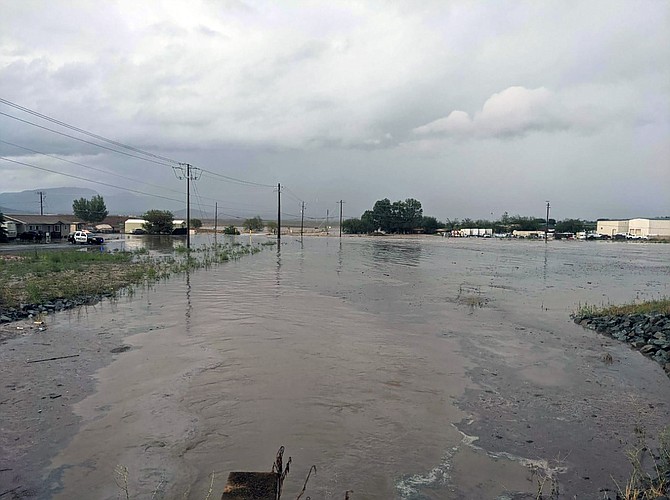 At around 2:25 p.m. Friday, the NWS tracked a strong thunderstorm 24 miles north of Chino Valley, which was moving south at 20 mph. Penny-size hail and winds in excess of 40 mph were possible.

NWS officials predicted that the storm would remain over primarily rural areas in Yavapai and Coconino counties, including Highway 89 south of Ash Fork.

In Paulden, CAFMA’s technical rescue team was able to assist a driver out of a wash and no injuries reported. Authorities are reminding people to take every precaution necessary in heavy rains and never attempt to drive through any running water.

In the mid-afternoon, Arizona Public Service (APS) reported on its website at outagemap.aps.com/outageviewer that at least 13 power outages had been reported, leaving an estimated 7,100-plus APS customers without power.

Heavy lightning and thunder were visible over Prescott Valley proper for about two hours in the early afternoon, leaving some motorists stranded and roads washed out. The Courier learned of a funnel cloud having formed in the area of Frontier Village.

At 3:25 p.m. Friday, the NWS reported that Doppler radar indicated thunderstorms producing heavy rain in Oak Creek Canyon, including in Sedona and Page Springs, where between 0.75 and 1.75 inches of rain fell.

Additional rainfall amounts of half an inch to 1 inch were possible in that area, the NWS added.

At 2:13 p.m., NWS officials reported on Facebook that the flash flood watch for northern Arizona had been extended through Sunday night, July 25.

“Unlike most of the monsoon season, storms will likely persist through the overnight hours, keeping the flood risk high well into the night,” the post stated. “Remember to avoid flood-prone areas like slot canyons, creeks and drainages.”

According to the Prescott Police Department, the area will have more rain through the weekend. The Central Arizona Fire and Medical Authority Station 53, 8555 Yavapai Road, is offering sandbags. People need to bring their own shovel.

A major storm has passed through the Prescott area and the Quad Cities, the afternoon of Friday, July 23.

At one point a funnel cloud formed in Prescott at Frontier Village.

Prescott Valley Police reported at about 3 p.m. flooding has closed Roundup/Viewpoint area and Robert Road from Tranquil to Highway 89A.

"Turn Around, Don't Drown!" PVPD stated in an email.

Courier staff is working to find out the extent of the damage; watch dCourier.com and The Daily Courier for details.