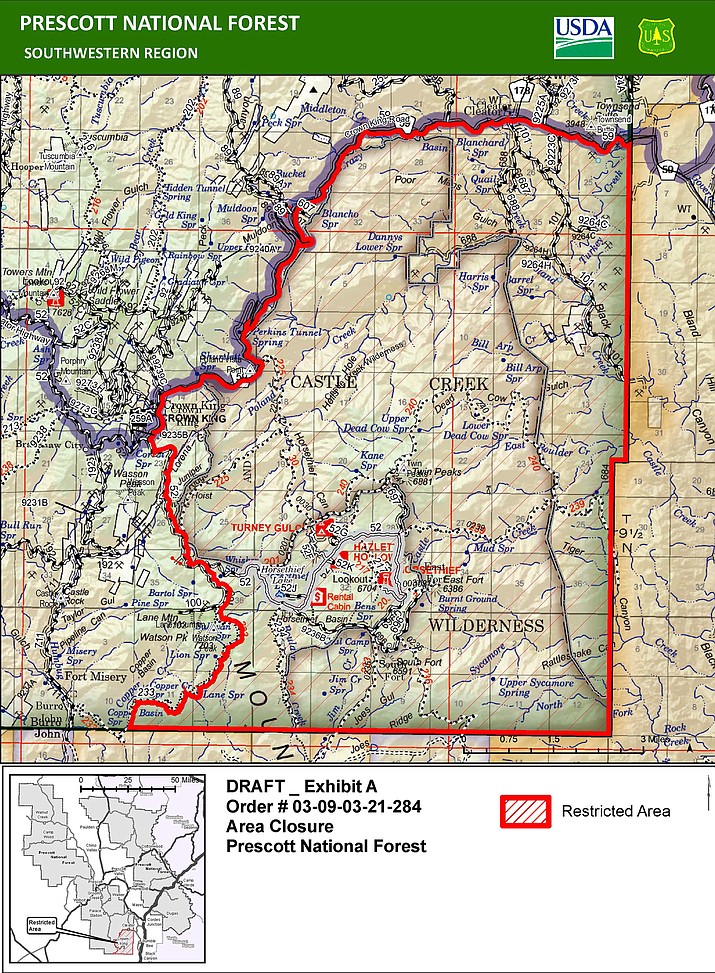 Prescott National Forest officials have ordered a restricted area consisting of all National Forest System lands, roads and trails within the boundary shown as of Thursday, July 15, 2021. (PNF/Courtesy)

Management of the Tiger Fire, which started 11 miles east of Crown King as a result of lightning on June 30, and was reported as 59% contained as of Thursday morning, July 15, has transitioned to a Type 4 Team as of July 15.

(The Tiger Fire, in a check of its status online Thursday evening, remains at 59% contained.)

As of Thursday morning, the fire had consumed 16,278 acres. Early morning rain on Wednesday arrived over the Tiger Fire footprint, bringing wetting rains over the perimeter until mid-morning. Amounts of rain recorded in the fire area varied from between 0.01 to 0.6 inches. These amounts further suppressed activity on the fire, and will allow the fire scar to begin new growth. Future rain events do have the possibility of flooding if larger amounts of rainfall occur.

Although there is no threat of fire spread or potential growth, firefighters will continue to patrol and monitor containment lines by ground and air. Equipment removal along Crown King Road (County Road 59) was completed on Wednesday allowing for a reduced fire-area closure. Visitors are reminded to obey all traffic signs and use caution when traveling along County Road 59 as firefighters and fire-related traffic will be in the area.

A Burn Area Emergency Response (BAER) team has been established to begin a burned-area assessment of the Tiger wildfire. BAER assessments are rapid evaluations of the burned area to identify unacceptable risks on National Forest Service lands from post-fire threats. The team’s focus is on the emergency actions necessary to protect life and safety, property and critical natural and cultural resources on NFS lands. The team also shares burned-area information from the assessment with other federal, state and local agencies with post-fire responsibilities on state and private lands both within and downstream of burned areas, including Flood Control District, Emergency Service, USDA Natural Resources Conservation Service (NRCS), National Weather Service (NWS), and.

The Tiger fire is primarily located within rugged and remote terrain associated within the Castle Creek Wilderness. Preliminary evaluation of the fire scar does not suggest downstream post-fire flooding risks to the public.

The BAER Team will evaluate burn severity, which reflects how the fire has altered soil properties, which influences post-fire flooding and soil-erosion rates. Initial evaluation has suggested minimal post-fire values at risk, and fire behavior indicates the probability of lower burn severity.

Lands affiliated with the Bureau of Land Management will not undergo a post fire analysis because of no identified values at risk.

The Yavapai Flood Control district will work in conjunction with the BAER team through the analysis, but at this time they have not identified post-fire flood concerns. As is customary from post-fire rain events, the public should expect to see downstream transportation of ash.

The first step in the BAER assessment process is taking satellite imagery and data collected during ground surveys to produce a soil burn severity map. The soil burn severity provides the baseline information to determine changed watershed conditions for assessing potential watershed impacts from wildfires. This information is then compiled to determine if a post-fire emergency occurs. The order of emergency response strategies includes natural recovery, administrative closure, then land treatments if unacceptable risks are identified.

REMINDER: The Tiger Fire Area Closure is still in effect on the Prescott National Forests. Detailed information and a map are available on Inciweb at Tiger Fire Information - InciWeb the Incident Information System (nwcg.gov).

1 - Persons with a written Forest Service authorization specifically exempting them from the effect of this Order.

2 - Any federal, state or local officer, or member of an organized rescue or firefighting resource in the performance of an official duty.

3 - Persons with a written Forest Service authorization specifically exempting them from the effect of this order.

This order took effect at 6 a.m. Thursday, July 15, and will remain in effect until 6 a.m. Aug. 31 or until rescinded, according to a news release.

Any violation of this prohibition is punishable as a Class B misdemeanor by a fine of not more than $5,000 for individuals and $10,000 for organizations, or by imprisonment for not more than six (6) months, or both.

Increasing chances of area thunderstorms and accompanying gusty outflow winds for the next several days. Possible flooding can accompany localized rain events during this period.

All Tiger Fire evacuation status designations by the Yavapai County Sheriff’s Office have been rescinded.