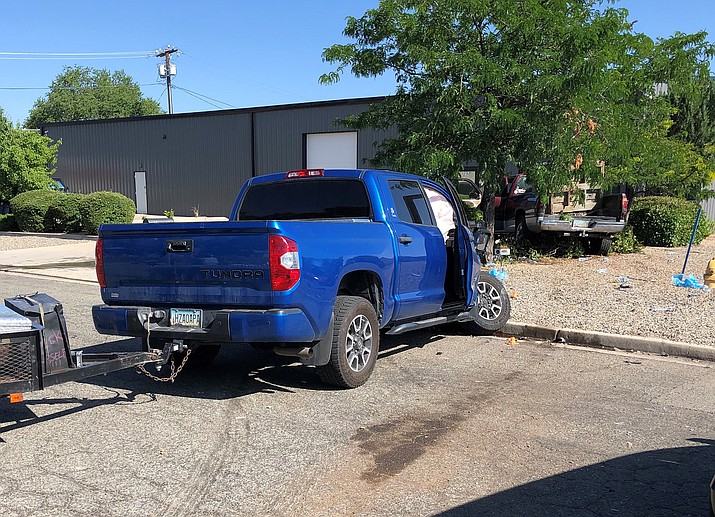 This blue Toyota truck was involved in a collision Friday, July 9, 2021, when it was struck by a Dodge truck. The driver of the Dodge died at the scene in Prescott. (PPD/Courtesy)

A Prescott man was pronounced dead after he was involved in a minor two-vehicle collision in the area of Arizona Avenue and Moeller Street in Prescott on Friday, July 9, according to a news release from the Prescott Police Department.

Just after 7 a.m. Friday, officers responded to a call of a minor two-vehicle crash in the area of Arizona Avenue and Moeller Street. When they arrived they found the driver of a Dodge diesel truck unresponsive behind the wheel.

Officers and paramedics immediately provided first aid and life-saving measures but the driver died on the scene. He was identified as a 50-year-old Prescott resident.

During the investigation it was learned that a 46-year-old and a 45-year-old, both residents of Prescott, were stopped in a blue Toyota truck on Moeller Street facing east at the stop sign of Arizona Avenue. They stated that the Dodge truck drove over the stop sign, a roadway post and then struck the passenger side of their vehicle.

The passenger in the Toyota was transported from the scene with non-life threatening injuries to a local hospital and the driver of the Toyota was not injured.

Preliminary information indicates that the driver of the Dodge truck may have had a medical emergency prior to the collision but it is unknown at this time. The investigation will remain open pending the results of an autopsy.

The intersection was closed for a short period of time while officers conducted their investigation. The next of kin of the deceased driver have been notified.