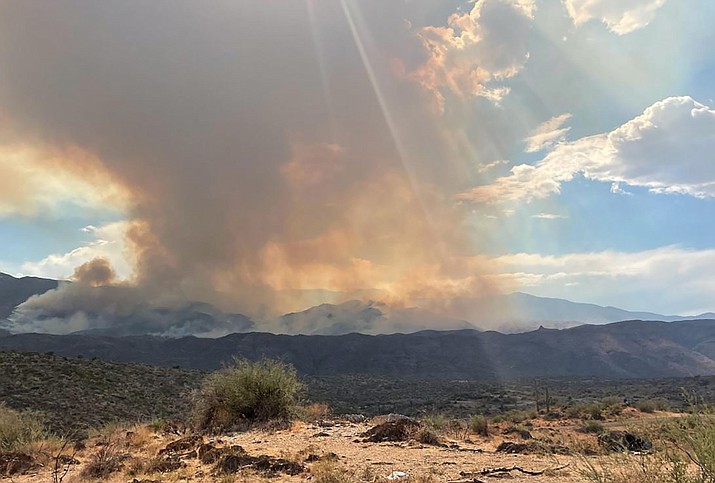 The Tiger Fire, which is burning near Crown King - southeast of Prescott - began June 30, 2021, from a lightning strike. (Inciweb)

The Tiger Fire, 11 miles east of Crown King, had reached 11,971 acres as of Monday morning, with 0 % containment. There are 205 personnel working the lightning-caused fire.

Rain on Saturday slowed fire growth and lessened its activity. As reported by remote automated weather stations placed around fire, the south end of the fire received 2.65 inches of rain, the north end got .70 inches and the east side, above Black Canyon City, only received .01 inch. The most active part of the fire has been determined to be on the northwest side, still in the Castle Creek Wilderness.

Access into the Castle Creek Wilderness is limited by the steep terrain, making it unsafe for firefighters to engage the fire directly at its edge. The incident-management team is being strategic on the placement of firefighting resources to ensure safe ingress/egress. Direct-suppression activities on that part of the fire may not occur until it moves out of the wilderness and onto more favorable terrain. Protection of life is the highest priority.

Crews continue to work on developing containment strategies, prepping potential control lines along roads and other features as well as continuing structure protection needs in Black Canyon City, Horsethief Basin and other areas of the fire.

WEATHER: Forecasts indicate a drying trend over the next few days which will increase fire activity.

EVACUATIONS: At this time, the communities of Crown King, Cleator and Black Canyon City are in “READY” status, Lorena Gulch Cabins have been “SET” status and Horsethief Basin is in “GO” status in accordance with Arizona’s Ready-Set-Go Program https://ein.az.gov/ready-set-go

The Temporary Flight Restriction (TFR) over the Tiger Fire remains in place and has been modified.

The TFR excludes all unofficial drone/UAV activity. “If you fly, we can’t”.

It is zero-percent contained.

They are seeing active fire, wind driven runs, flanking, and fire behavior affected by outflow winds from thunderstorms, according to inciweb.gov.

Fire personnel were engaged in a variety of ways on the Tiger Fire on Saturday. Winds pushed the fire to the north toward Cleator and west toward Horsethief Basin. Use of aircraft was effective in slowing the fire's progression to the south and east toward Black Canyon City.

Afternoon storms brought wetting rain to Horsethief Basin with some isolated showers in the interior, unfortunately more precipitation is needed to make a significant impact across the fire.

Even with some light precipitation, the fire remains active. Crews continue to work on developing containment strategies and prepping potential control lines along roads and other features and begin structure assessments in Black Canyon City.

At this time, the communities of Crown King, Cleator and Black Canyon City are in “READY” status; Lorena Gulch cabins have been “SET” status; and Horsethief Basin is in “GO” status, in accordance with Arizona’s Ready-Set-Go program.

The Prescott National Forest has updated the size of the Tiger Fire to 5,567 acres, as of Saturday morning, July 3.

The Tiger Fire remains active, with short duration runs due to wind and topography pushing the fire to the north and east onto Bureau of Land Management lands. Firefighters continue to focus on the western and eastern part of the fire.

Access into the Castle Creek Wilderness is limited by the steep terrain making it unsafe for firefighters to fight the fire directly at the edge. The incident management team is being strategic on the placement of firefighting resources to ensure safe ingress/egress. Protection of life is the highest priority.

According to inciweb.gov, the Tiger Fire has grown to about 5,500 acres 11 miles east of Crown King.

The lightning-caused fire started Wednesday, June 30, and has 76 personnel working the blaze.

The incident command's estimate for containment, which currently is 0%, is Tuesday, July 20.

The fire is burning in tall grass and brush that is extremely dry due to the drought.

The fire is shifting because of wind and topography.

In the next 24 hours, the fire is expected to spread west and south.

The Prescott National Forest reported Friday, July 2, the Tiger Fire near Crown King has grown to 1,700 acres and is 0% contained.

The fire is among three that a Wednesday evening, June 30 storm ignited.

The lightning-caused fire was first detected at about 3:45 p.m. Wednesday, after a thunderstorm went through the area.

It is burning in chaparral and grass about 11 miles east of Crown King.

This week, passing thunderstorms across the Prescott National Forest ignited several fires across the forest.

The Tiger Fire started June 30 at 1:52 p.m. from a lightning strike in the Castle Creek Wilderness. The 1,700-acre fire is burning in steep rugged terrain. Remote access to this part of the forest is limiting full suppression efforts.

On Friday, firefighters will start scouting for control features and identifying hazards on the east side of the fire. Resources including crews and engines have been ordered. The fire has been active through the night moving to the north and east. Heavy smoke will be visible along the Interstate 17 corridor near Black Canyon City and Sunset Point as the fire burns through heavy drought-affected fuels.

WEATHER: Isolated showers and thunderstorms are expected to develop during the afternoon on Friday, and again on Saturday. Locally heavy rainfall, lightning and strong gusty outflow winds will be possible. Southwest winds increase each afternoon, becoming light during the overnight periods.