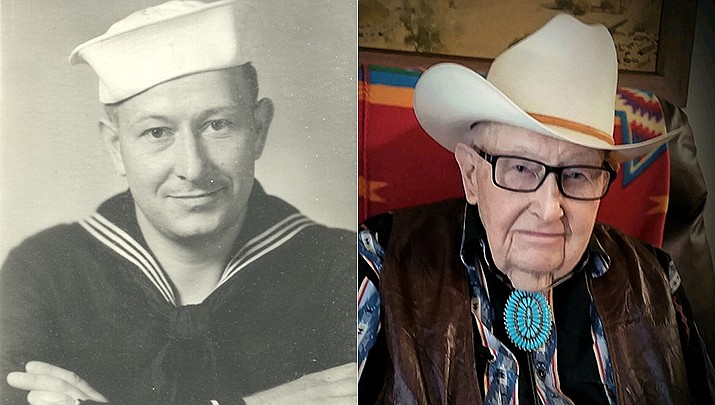 Joe Charles Nemec, age 103, died January 9, 2021 in Prescott, Arizona. He was born on a homestead near Roundup, Montana on February 7, 1917 to Joseph F. and Frances F. Nemec and was the oldest son of the family. He completed grade school at the Cottonwood School District #18 and was graduated from Fergus County High School at the age of 16, in Lewistown, Montana. As a young man he worked as a ranch hand and a tractor operator for several ranches in Central Montana.

In 1936 he enlisted in the Civilian Conservation Corps administered by the U.S. Army. He worked as a saddle maker for the U.S. Dept. of Forestry while in the CCC. In 1939, while working as a ranch hand in Montana, he met a school teacher at a country school nearby. Her name was Fleeta Madeline Haun. They were married in Red Lodge, Montana on July 29, 1940.

In 1941, they moved to San Diego, California, where Joe was employed at Consolidated Aircraft Corporation, and at North Island for the Navy Department. During World War II in 1944, he enlisted in the U.S Navy and served as an Aviation Instructor. He was discharged from the U.S. Navy on February 18, 1946 with the rank of Aviation Metalsmith Petty Officer Second Class.

Subsequent to his discharge, he was employed by the Navy Department at North Island, California, as an airplane mechanic and aircraft inspector.

In 1954, Joe was licensed by the former Civil Aeronautics Administration as a certified Airframe and Power Plant mechanic. At North Island he re-assembled a small seaplane called the Kingfisher to be used by Admiral Byrd on his last Antarctica expedition. In 1955, Joe was a member of a seven-man team organized to establish a Navy Aircraft Overhaul Inspectors Association at North Island. As a direct result, nine other locals at Naval Air Stations throughout the U.S. were established and a National Association of Government Inspectors was formed. In 1956, Joe served as President of the North Island aircraft Overhaul Inspectors Association. After ten years at North Island, he transferred to the Air Force Procurement Office at Lindberg Field, San Diego, California to enter the Atlas Missile Program as a Quality Control inspector. In 1959, Joe was the Project Inspector on the Atlas Missile which orbited the world, broadcasting President Eisenhower’s Christmas Message of Goodwill. He later served as Quality Control Supervisor for the Air Force Plant Representative at Lindberg Field, Plant 19. During his employment with the U.S. Defense Department, Joe organized and monitored the Quality Control Program at the thirteen site activated bases for the Atlas Missile Program. These bases were under the command of the Strategic Air Command (SAC). In 1960, Joe was granted an Outstanding Performance Rating, by letter, from Major General Ben I Funk, USAF Commander.

After thirty years in the aviation and missile industry, Joe retired from Federal Civil Service with the Defense Contract Administration Services, San Diego, California. During retirement, Joe and his wife traveled extensively abroad and visited all of the fifty states. He loved the outdoors and like to hunt, fish and camp. Joe was always proud of his three Honorable Discharges from; the Civilian Conservation Corps, the Montana National Guard and U.S. Navy World Ward II. Joe and Fleeta were married sixty years. Fleeta passed away on December 19, 2000.

Joe was a member of Aztlan Lodge #1, F. and A.M., and was also a member of American Legion Post 6, Prescott, Arizona, His favorite charities were the Salvation Army and the Veteran Organizations. He possessed a high sense of integrity and was a very honest and conscientious worker.

Joe was a self-made man and dealt with life in a direct straightforward manner. He was well thought of and respected by all those who knew him. His word was as good as his bond

Joe was preceded in death by his parents, two brothers and four sisters.