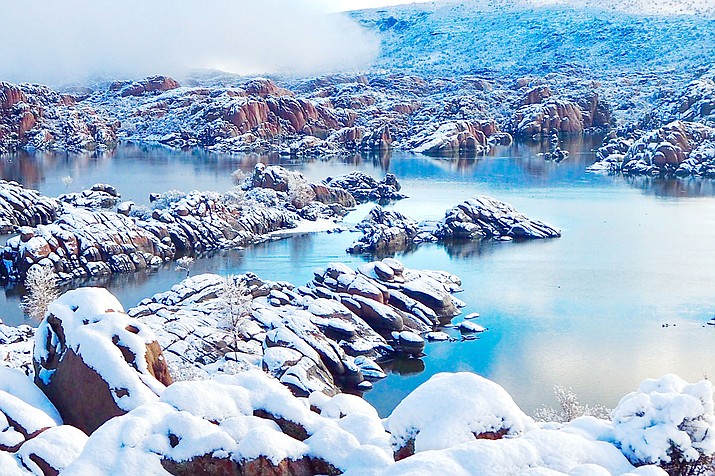 Snow falls on Watson Lake in Prescott on Monday morning, Jan. 25, 2021. The City of Prescott was estimated to get anywhere from 12 to 18 inches of snow Monday, with the second storm in four days clearing out sometime Tuesday, Jan. 26. For weather updates, watch The Daily Courier and dCourier.com. (Karen Shaw/Courtesy)

With an estimated 12 to 18 inches of snow falling Monday, Jan. 25, the City of Prescott could see temperatures drop into the low teens Tuesday.

On Monday afternoon, Prescott Mayor Greg Mengarelli signed a proclamation of emergency, according to a news release.

Monday’s snowstorm was the second of its kind to hit the quad-city area in four days, with the first storm moving across the area Saturday and Sunday, Jan. 23 and 24, dropping 1 to 3 inches of snow, depending on the area.

But the second storm Monday brought with it wind gusts up to 33 miles per hour, according to the National Weather Service, with daytime snow expected in the 6- to 10-inch range and potentially new snow accumulation after dark of 4 to 8 inches.

On Tuesday morning, the National Weather Service is calling for a 60% chance of snow showers that could bring up to an inch of snow with a high of 31 degrees. Tuesday’s low temperature is expected to be 13 degrees.

The National Weather Service is predicting a break in the storm Wednesday with mostly sunny skies and a high of 39 degrees.

Monday’s proclamation of emergency, in accordance with ARS 26-311, allows the City of Prescott to seek reimbursement if and when a state or federal emergency or disaster declaration is made, according to a news release.

“Residents are urged to stay off the streets and avoid driving during this storm to allow emergency and public service vehicles to travel as freely as possible,” City of Prescott spokesperson John Heiney said in a statement. 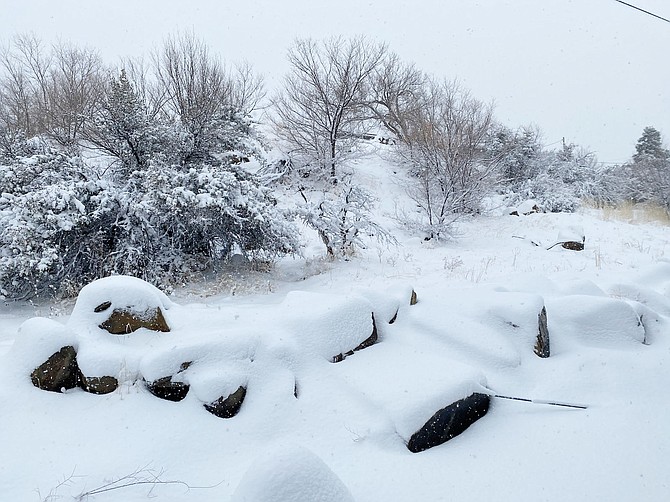 This Monday, Jan. 25, 2021, photo shows several of inches of snow already on the ground by noon in the backyard of Brian M. Bergner Jr., news/sports editor for The Daily Courier. Want to share your snow photos from Monday and this past weekend? Email the Courier at editors@prescottaz.com. (Irma Bergner/Courtesy)

For City of Prescott plowing updates, visit prescott-az.gov and click on “Snow Plowing Information.” For non-emergency snow-related questions pertaining to the City of Prescott, please call 928-777-1100.

The Solid Waste Division will work the remainder of the week to catch up collection routes, this may include Saturday and Sunday, the city explained.

Snowmageddon 2? Current snowfall comes close to levels of 2019 epic storm
Storm forecast puts Prescott on watch with snowfall of 15 to 27 inches predicted
2 storms expected to drop anywhere from 10 to 30 inches of snow in some northern Arizona areas
City of Prescott mayor rescinds Proclamation of Emergency
City of Prescott, its inhabitants returning to normal after snowstorm
Event Calendar