Expect at least 12 inches of snow in Prescott area, Weather Service says
Another storm to hit next weekend too 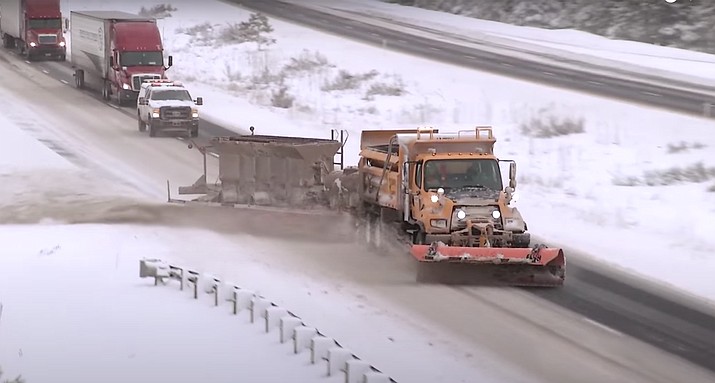 Snow plows will be out in force this weekend, with at least 12 inches of snow expected by early Tuesday, Jan. 26, 2021. (ADOT/Courtesy, file)

The two winter storms that are bearing down on northern Arizona this weekend promise at least 12 inches of snow when it’s all said and done by Tuesday morning, said Brian Klimowski, meteorologist in charge at the National Weather Service, Beaumont office near Flagstaff.

Klimowski, in a Saturday morning interview, Jan. 23, said the first storm was to hit the greater Prescott area Saturday evening and through Sunday.

“We have a system here that will impact us later today (Saturday) and through Sunday, dropping about 3 to 5 inches of snow,” he said. “Higher terrain to the south and west of the greater Prescott area can expect more than 6 inches; Chino Valley, probably 1 to 3 inches.”

The bigger impact storm, late Sunday through early Tuesday, is expected to bring at least 12 inches of snow to the tri-city area, he said, adding that 18 inches is forecast for south and west of Prescott.

“The systems are not drought busting – but will provide much needed liquid moisture,” Klimowski said, clarifying that between the rain and melted snow Prescott-area residents can expect 1.5 to 3.5 inches of precipitation soaking into the ground.

“It is a drought reliever but not a drought buster. We’re very far behind (in precipitation) but this will be very beneficial,” he said.

That is on top of 2020 being the driest year ever in recorded history, with 6.69 inches of precipitation; normal is 13.94 inches. The Weather Service began recording weather data in 1898.

Klimowski added that the extended forecast is still calling for warmer and drier winter conditions than normal. “We will still see some (storms) in this La Nina winter, but we will see less.”

He said the Weather Service’s meteorologists currently are keeping their eyes on another storm, which is expected to roll into northern Arizona next weekend, Jan. 29-31, “that could drop significant moisture too.”

The Arizona Department of Transportation advises drivers to consider delaying all but essential travel, according to a news release.

ADOT officials stated late last week that waiting out a storm before traveling is the safest and most efficient option because it allows ADOT’s snowplows to clear the highways more quickly. A highway takes much longer to plow when it’s crowded with vehicles that shouldn’t be traveling on a roadway that’s slick with snow and ice.

If delaying travel is not possible, leave prepared with the expectation of spending extended time on the road. Remember to slow down, leave extra room behind the vehicle ahead of you, and pack an emergency kit containing a fully charged cell phone, warm clothing, blankets, food and water, medications and sand or kitty litter in case you get stuck in the snow.

While ADOT’s snowplow operators are ready to help you, you should help them in return. Always respect the plow. Avoid passing a snowplow that’s clearing a highway until the driver pulls over to let traffic pass, and never assume a snowplow operator knows your vehicle is nearby. If you can’t see the plow driver, there’s a good chance the driver can’t see you.

Remember, ADOT added, the safest place on a highway when it’s snowing is trailing a safe distance behind a snowplow.

EDITOR’S NOTE – This weather report from the National Weather Service was up-to-date as of 9 p.m. Saturday, Jan. 23, with snow beginning to fall in the Prescott area. Watch The Daily Courier and dCourier.com for updated information as details are made available.