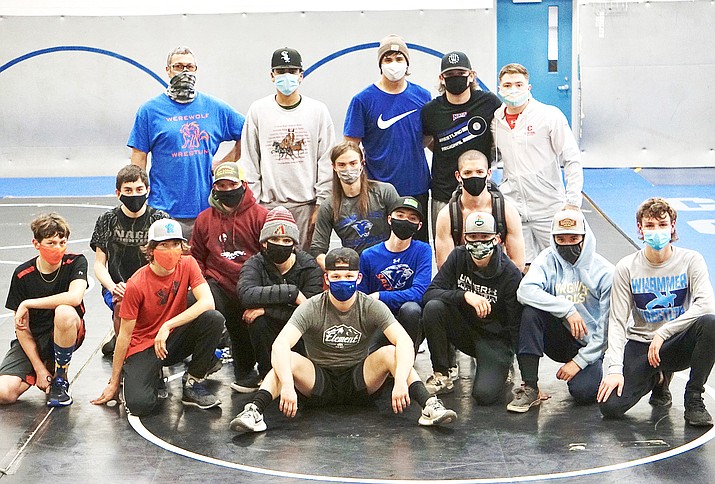 Chino Valley wrestling takes a team photo after a team practice on Tuesday, Jan. 19, 2021, in the Chino Valley High School West Gym. With the Arizona Interscholastic Association (AIA) reinstating the high school winter sports season after canceling it, the Cougars will open their season with a dual meet against Bradshaw Mountain at home on Wednesday, Jan. 20. (CVHS/Courtesy)

CHINO VALLEY — As robust and experienced of a program Chino Valley wrestling is, its toughest opponents may not be against those from another school, but against the masks the wrestlers will have to wear on their faces all season.

The Arizona Interscholastic Association (AIA) delayed the start of the high school winter sports season multiple times and even canceled it a little over a week ago, but it ultimately decided to reinstate the season due to an outcry from players, parents and coaches who wished to continue with winter sports despite a concerning spike of COVID-19 numbers in Arizona.

However, with this reinstatement came several new safety protocols, including one that requires all athletes to wear masks during competitions.

This didn’t sit well with a large portion of the athletes but for most Chino Valley wrestlers, they understand it has to be done to be able to compete on the mats in this peculiar season.

“It’s OK. Obviously, everyone is going to moan and complain about [the masks] but we’re getting back on the mat, that’s all that matters,” said senior Colby Evens, who won the individual state title last season and is committed to North Dakota State University. “If it takes putting on a mask, I think everybody is OK with wearing a mask during a match.”

The Cougars will be without superstar wrestler Keller Rock — who graduated last year and now wrestles at nearby Embry-Riddle — and a handful of others who opted to sit out the season because of the many delays and safety concerns, according to head coach Kevin Giese. However, Giese also said that Chino Valley will still field a solid group of wrestlers and will try to match, or even surpass, the Cougars’ performance at last year’s state meet where they placed third among 49 D-III teams.

“Unfortunately, due to COVID, we lost a lot of our wrestlers in the beginning of the season. We were up to 25 and I think we’re down to about 14 right now,” Giese said. “But those 14 that stuck it out and are still here, they are actually doing really well. We’re pretty solid through 95. We got a couple blanks at the top end but other than that, I think we’re going to have another solid team this year.”

Giese added that he’s going to tinker with the team’s strategy this year, saying the team won’t focus so much on winning duals but more so on getting wrestlers to sectionals and state with seeding criteria due to the shortened season.

While Evens will be at the forefront of Chino Valley’s top wrestlers, he will also be joined by Dakota McMains, who finished second at sectionals and sixth in state for the 170-pound weight class. This year, McMains has moved up to the 195-pound weight class.

“Everyone’s excited to be back, wrestling other schools and just coming and competing, getting in good shape,” McMains said. “We are missing some big guys this year but we still have a chance at taking the state title. We have Sahuarita to look out for but we have to look out for all the schools still because if you overlook someone, they’re going to come and punch you in the mouth.”

Hunter Lane, Craig Stephenson and Damen Nielson are also expected to have strong campaigns this year as they aim to qualify for state.

Chino Valley was realigned into a new section this year and now competes in Division III’s Section I, which also features quad-city rivals Prescott and Bradshaw Mountain. Giese said their section this year is tougher than last year’s and will probably turn out to be one of the most competitive sections in the state.

“As a team, we got a goal of getting as many wrestlers to state as we can. We’re hoping to place in the top five team-wise,” said Giese, who also went on to say that a large part of accomplishing these will be to rally around wrestlers like Evens and McMains, who have already proven they can motivate their teammates to always be at the top of their game.

The Cougars will open their season with a dual meet against Bradshaw Mountain at home Wednesday, Jan. 20, starting at 4 p.m.