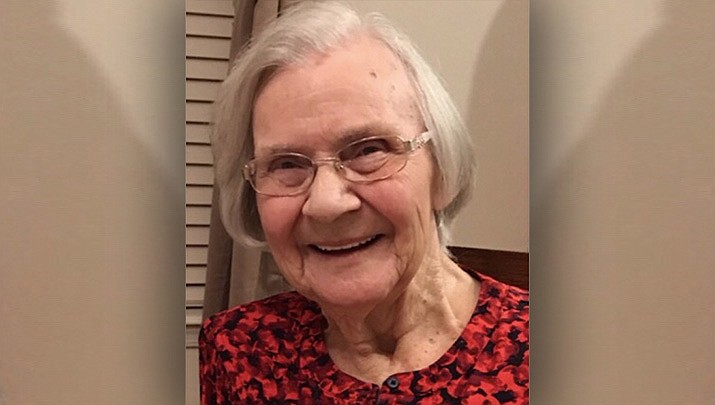 On Sunday, Jan. 3, 2021, Janet Louise Good, beloved mother and wife, passed peacefully at home in Peoria, Arizona, surrounded by her loving family. Janet was 89. She was born on Dec. 3, 1931, in De Pere, Wisconsin, to John Henry Bryant and Mary Angela Houren. The family eventually settled in Midwest City, Oklahoma. Janet was one of nine children; a close-knit family, she absolutely adored her siblings.

While John was stationed at Tinker Air Force Base, he was introduced to Janet. They enjoyed spending time together going to dances and listening to music. On July 20, 1951, Janet and John were married at St. Philip Neri Catholic Church in Midwest City. When John’s Air Force service was complete, they moved west to Northern California with two small children. In 1964, now a family of nine, they packed up their VW Bus and moved to Prescott, beginning a new chapter in their lives. As licensed dispensing opticians, Janet and John became owners of The Optical Shop, which served the people of Prescott for many decades. Years later, Janet acquired her Arizona Real Estate License and sold properties in Prescott.

Janet was a devout Catholic who saw to it that all seven children were clean and well-dressed to attend mass every Sunday — a monumental feat. It was a rare occasion when the family missed a Sunday mass. She led by example, loved unconditionally, and always had a kind word to say. Janet volunteered at Sacred Heart Church as a Eucharist Minister and Lector of the Word, a member of the Parish Council, a BE and FOLLOW ME leader for high school teens as well as many other ministries. Janet also volunteered at St. Vincent de Paul Thrift Store.

As well as her faith, Janet loved her family dearly. She loved cooking, was a wonderful caregiver and made our home beautiful. She loved sewing, quilting, and reading Catholic history and geography. When her kids were grown, she and John enjoyed traveling abroad to the Holy Land, and Germany, where they attended the Oberammergau Passion Play. They also took many RV trips around the western part of the U.S. As their children began families of their own, you could expect to see most of them home for Christmas, Easter and Thanksgiving celebrations to a house filled with love.

Janet will always be remembered for her everlasting love of Christ, her love for her family and her beautiful smile that lit a room.

Due to COVID-19, a private service and internment will be held for immediate family only. A celebration of life for all family members and friends will be scheduled for a later date when it is safe together.