Yavapai County looking to secure larger vaccination sites
Adults 65 and older to be added to Priority Phase 1B Jan. 19 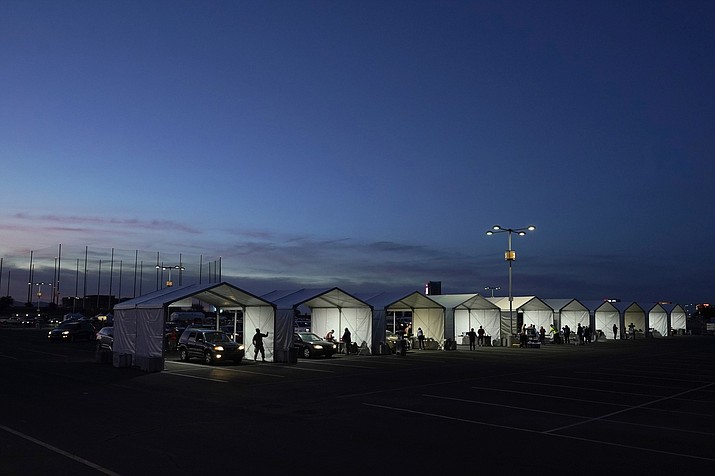 In this Jan. 12, 2021 photo, several tents are set up so people who have registered can get their COVID-19 vaccinations as they drive through the parking lot of the State Farm Stadium in Glendale, Ariz. The rapid expansion of vaccinations to senior citizens across the U.S. has led to bottlenecks, system crashes and hard feelings in many states because of overwhelming demand for the shots. (Ross D. Franklin/AP, File)

The Arizona Department of Health Services announced Wednesday that an additional 750,000 Arizonans 65 and older will be prioritized for the COVID-19 vaccine in the Phase 1B portion of the state's vaccine rollout as of 9 a.m. Tuesday, Jan. 19.

State health officials had previously allowed vaccines for those 75 and older, with the younger groups to follow in later phases. Individual counties are now being allowed to set their own prioritization rules based on how many doses they have available, officials said.

"Yavapai County along with other rural Arizona counties, is receiving small allocations of vaccine — with less than 4,000 doses this week, and 12,000 next week, which includes second doses for those initially given the first doses of the vaccine in December," Yavapai County Community Health Services (YCCHS) stated in a news release Thursday, Jan. 14. "We know the demand for the vaccinations is high, and YCCHS and our community partners are working tirelessly to administer the vaccines as expediently as possible."

The county estimated it has about 100,000 people in Phase 1B alone.

YCCHS is now activating 26 onboarded providers authorized to order and administer vaccine beginning next week, along with pharmacies. A list of providers will be available on the YCCHS website, www.yavapai.us/chs, and with its COVID-19 phone bank at 928-442-5103.

"Work is being done to secure larger vaccination sites in the county to enable efforts to expand as vaccine supply increases. The Emergency Phone Bank lines will be increased beginning Tuesday to be open 8 a.m. to 5 p.m. Monday through Friday. The phone bank will be able to assist people without access to a computer," YCCHS explained.

The State Farm Stadium mass vaccination site in Glendale is booked through the end of January. Arizona Department of Health Services (ADHS) is gearing up to open a second state site at Phoenix Municipal Stadium on Feb. 1, with the Pfizer vaccine for people eligible in Phase 1A and Phase 1B.

Unlike the State Farm Stadium site, Phoenix Municipal Stadium will not run 24 hours a day. It will be open only during the day. The number of available appointments will depend on the number of vaccine doses Arizona has on hand. Scheduling for the new site begins at 9 a.m. Tuesday, Jan. 19, on the ADHS website, azdhs.gov. Anyone needing assistance with signing up can call 602-542-1000.

If you are the owner of a workplace or agency in Yavapai County with staff needing to be vaccinated in either Phase 1A or 1B, you can complete the online form at https://form.jotform.com/203526242875053 to provide YCCHS with your contact information and the number of staff needing vaccine. The health department will alert you to options for getting vaccinated.

Arizona's vaccination program was slow to get off the ground, but officials said the first state-run large site, at State Farm Stadium has proved to be success — administering thousands of doses daily, officials said.

At the same time, Arizona had the nation’s highest COVID-19 diagnosis rate over the past week, leaving residents eager to receive the vaccine. But the task of serving 7.2 million people — twice if you consider the required booster shot — is not an easy endeavor. The rollout has put pressure on state leaders.

"Part of the issue of course is staffing," he said, but also explained that there were some concerns by his staff that the state could run out of vaccines. "We're giving the vaccine out so quickly, we're giving them out as quickly as they are coming in. We don't want to run out of vaccines, but I am pressing really hard on the administration and the private section to get us more vaccines to the state. We've got to get them out to the rural areas, the tribal nations..."

Ducey also said he wanted people to know what the future is going to look like regarding receiving the COVID-19 vaccines.

"We're not going to continue to stand up mass vaccination centers. You're going to be finding this at your pharmacy, at your urgent care center and at your doctor... you're going to be able to go to your doctor, have a doctor's appointment, get your vaccine, come in three, four weeks later and get your boost," Ducey said.

Ducey acknowledged that hospitals in the state are "recently at critical levels" and said Arizona will be able to vaccinate its way out of the pandemic crisis.

"The vaccination is the only solution. It's the first solution that's presented itself since January 27th when we say the first case (surfaced), and Arizona is doing it right now as good as any state in the nation and we're going to keep it up."

"This too shall pass," Ducey said during the interview.