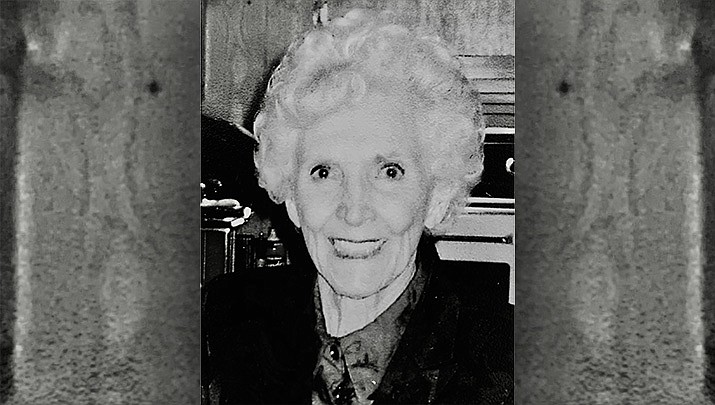 Grace was the youngest of three children, born to Mike and Beth Jones, both from farming families in California’s San Joaquin Valley. The family moved to tiny Friendly Corners, Arizona, outside Eloy in 1938. Because there was no nearby high school, Grace and her mother lived in a rented home in Tucson during the school year, returning to the farm on weekends and school vacations.

After graduating from Tucson High School in 1941, Grace attended the University of Arizona, where she met her future husband, David Hamblin Palmer II, when she was a freshman and he, a junior. Since World War II was raging, Dave was in a hurry to finish college, earning both a BA and a law degree in five and a half years. Soon after Dave passed the bar exam in 1944, Grace’s junior year, they married at St. Luke’s Episcopal Church in Prescott, where Dave had accepted his first job. Grace often remarked that she was very glad that Dave had accepted the Prescott job rather than one in Florence. Regretting not having completed college before marrying, Grace, over the years, took a number of correspondence courses and returned to the U of A for one semester, completing a BA in Spanish in 1968, the same year her daughter Beth graduated. When Grace and Dave married, they moved into their first home, a tiny house on Parr Drive and quickly started a family, having Ann in 1945, Beth in 1946, and David III in 1948. When Dave was a baby, they moved into their home on Park Avenue before having their youngest child, Mike. Grace lived in the Park Avenue home until shortly before her death. All four children attended Lincoln School, Prescott Junior High, and Prescott High School.

Only a few years into their marriage when Grace and Dave were still in their 20s, Dave ran for and was elected Yavapai County Attorney, eventually serving four two-year terms followed by 10 years in the Arizona State Senate. Grace was very proud that Dave “was never defeated and he was a Democrat, which is practically unheard of [in Yavapai County].” Sometimes life could be difficult as Dave “was in the newspaper continually because he didn’t hesitate to give his opinion and wasn’t very tactful. He was forceful. A lot of the time he was fighting an uphill battle, but he was into it….He always opposed vested interests and he tangled with utilities and mines and railroads a lot.” She raised her children to respect the underdog, to desire justice and equal treatment for everyone, and to base their judgments on a person’s character rather than on that person’s social position, race, ethnicity, or religion, considering such things unimportant. Because of that attitude, she had many friends from all walks of life.

Being married to a politician and having had four children in six years, Grace kept exceedingly busy being a mother and homemaker. She was always very involved in her children’s activities, keeping them on top of their school work and attending all their sporting events and performances. As she said, “Whatever was going on, I was always there.” Grace always loved young people, and her home was often young people’s gathering place. So that teens would have somewhere to go on weekend nights, she and Dave hosted innumerable parties when their children, especially the girls, were teens.

Grace was most proud of the fact that she headed the Red Cross’ free “Learn-to-Swim” campaign for 15 years, first at Granite Dells and, after it was built, at the YCYC, where the “Y” now is. The free swim program was very, very popular, and hundreds of children attended each year with kids coming from Chino Valley, Skull Valley, Humboldt and Dewey as well as Prescott. The program offered classes at all levels from beginners through advanced swimmers and senior life saving. At different times, the program also offered classes in Sedona, Bagdad, and Clarkdale. Grace was grateful to volunteers such as Sammy Hill, Vic Lytle, Doris and Ken Shake, Jean Wilhelmsen, Pat Eckel, and Bill Blair who became certified instructors and volunteered many, many hours to the program. Grace’s children also went through the program before becoming instructors themselves. Many other teens also became volunteer instructors. No one was paid. When someone told Grace that she couldn’t have the program if the children weren’t all white, she responded, “I will not have it then — the only requirement is that they be a child.” The person backed down, and classes continued to be offered to all community children. She said, “I think I saved people from drowning. There were very few drownings in Yavapai County. All the kids knew how to swim.”

Grace always loved dancing and had been in the modern dance group Orchesis at the University of Arizona. When she was 55, she began taking Jazzercise and took classes six days a week until she was close to 80. Thus, she remained exceedingly fit and active.

Because her husband struggled with alcoholism for much of his life before finally getting sober and remaining sober for the rest of his life, Grace became active in Al-Anon. Although anonymity is important to many alcoholics and their families, after Dave became sober, neither Grace nor Dave ever tried to hide his problems; and Grace quietly worked to help families and friends of alcoholics until her health deteriorated.

As Grace always said, she, unlike her husband, was not much of a joiner although she was involved in the Democratic Women’s Club, was one of the founders of the Junior Monday Club and, later in life, went to Westerners and the Dinner Club. She was also a long-time member of the women’s social club Sew and So, which a group of Prescott women formed when their children were young.

Grace loved Prescott and Yavapai County and never wanted to leave. In her later years, she could often be seen walking up and down Park Avenue picking up every piece of trash she saw helping keep Prescott beautiful. This strong and interesting woman could talk knowledgeably about almost any subject. An avid reader, she was always interested in learning more. She was also a naturalist who particularly appreciated birds and enjoyed bird watching.

Grace requested that no services be held. In lieu of flowers, please donate to your favorite charity. Arrangements entrusted to Hampton Funeral Home.