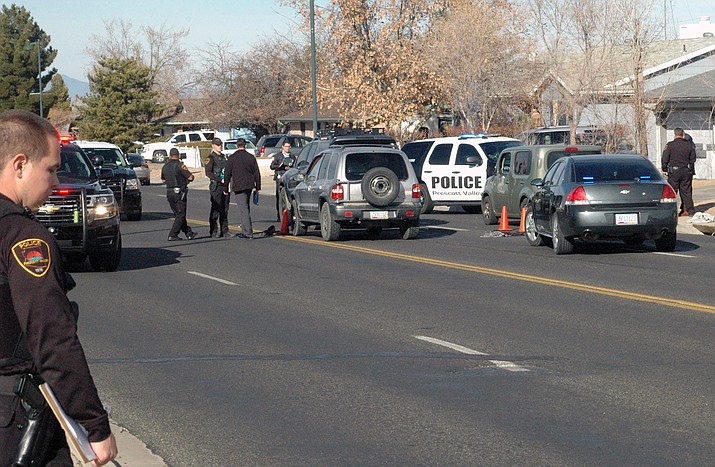 Prescott Valley Police are investigating an apparent shooting that has resulted in a shutdown of Robert Road, between Nancy and Gale roads, Friday afternoon, Jan. 8, 2021. (Tim Wiederaenders/Courier)

At about 2:22 p.m. Friday, Jan. 8, Prescott Valley Police responded to a report of a traffic altercation on Robert Road, between Nancy and Gale roads about one mile north of Highway 69.

Responding officers found that two drivers heading north on Robert Road got into a traffic altercation. A collision occurred, and both drivers exited their vehicles and got into a physical confrontation, during which a weapon was discharged, injuring one of the drivers, according to a news release.

The injured driver was flown to a northern Phoenix-area hospital. That driver’s health status is currently unknown. The other driver is being interviewed by police at this time.

This incident is still under police investigation and further information was not immediately available.

During the investigation, vehicles were surrounded at the scene by law enforcement cars and fire vehicles. Police were interviewing neighbors and those involved.

Both north and southbound Robert Road traffic was shut down as a result. Prescott Valley Police issued a notice through a Nixle email stating they were "currently involved in a police activity in Prescott Valley between Robert (Road) and Nancy (Drive). Please avoid this area until further notice."

Watch the Courier and dCourier.com for details as they are made available.