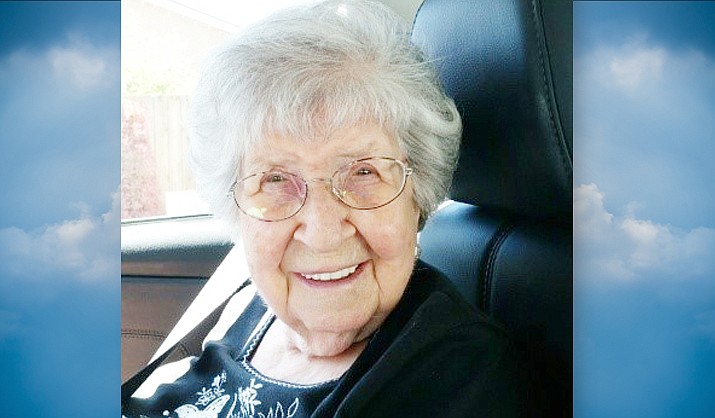 Verna Christine (Chambers) Swope-Martin was born on Dec. 22, 1917, in Altoona, Pennsylvania, to Oscar Lincoln Chambers and Sarah Elizabeth (Rutter) Chambers. She was the oldest of nine children. Sadly, Verna passed away at the Arizona Pioneers Home on Feb. 10, 2021.

Verna married Arthur Gordon Swope on June 3, 1935, in Altoona, Pennsylvania. They had six children. The family moved to Prescott in October 1949. She worked various jobs over the years including hotel desk clerk, laundry worker and sewing machine operator. She retired from the Prescott VA Medical Center in 1979. Art and Verna traveled frequently during their early retirement. They especially liked to return to Pennsylvania and Florida for extended stays.

Art and Verna moved into the Arizona Pioneers home in 1995. They settled in quickly and it became family and home. Art passed away in 1996. Later, Verna was married to Harry Maurice Martin for 12 years until his death.

Services will be held at Sacred Heart Catholic Church on Thursday, Feb. 18, 2021, Rosary at 10:30, Mass at 11, and burial at Mountain View Cemetery immediately following.