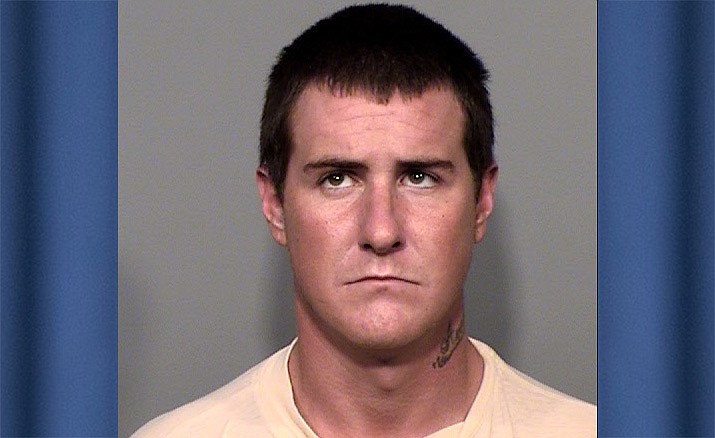 Bracher, whose last known address was on Dana Drive in Prescott Valley, was wanted on charges of felony flight from law enforcement, endangerment, weapons misconduct and possession of drug paraphernalia, the news release stated. These charges originated from a 2017 case in which Bracher led law enforcement on a high-speed pursuit endangering victims in the process.

Bracher was arrested on those charges, was released, and had since violated the terms of his release.

Acting off various sources of information in the community, the detectives were able to locate Bracher at an apartment in the area of 14th Street and Thomas Road in Phoenix. Detectives and SWAT operators were able to catch Bracher as he was leaving the apartment on foot. He was taken into custody without incident.

On Nov. 21, 2017, Bracher was moving out of the victim’s residence where he had been staying for an extended period of time. Upon leaving, Bracher stole a Ruger 10/22 .22 caliber rifle and a Ruger Mark 3 .22 caliber handgun.

A YCSO investigating deputy responded to an address in Prescott Valley where Bracher had moved. The deputy recovered the rifle and drug paraphernalia in the room Bracher was staying in. He was not home at the time.

Bracher is a convicted felon and is prohibited by law from possessing a firearm.

On Dec. 7, 2017, a YCSO deputy attempted to perform a traffic stop on Bracher on northbound Interstate-17 MP 247. Bracher had a front seat passenger at the time.

Bracher failed to yield to the deputy and fled in the vehicle. He then drove onto southbound Interstate-17 driving in a northbound direction endangering his front seat passenger as well as other individuals on the road at the time.

The passenger told Bracher to stop and let him out. He finally did stop the vehicle in the area of Bumblebee Road and fled on foot. As a result of the above crimes, Bracher was wanted on the three separate warrants with the following charges: weapons misconduct, two counts of theft, possession of drug paraphernalia, unlawful flight from law enforcement and two counts of endangerment.

On April 11, 2019, Bracher was arrested on these charges following the January 2019 running of CATCH 22 in local news outlets and social media. He was then released on bond, violated his release conditions and was wanted on a felony warrant with a $50,000 bond.