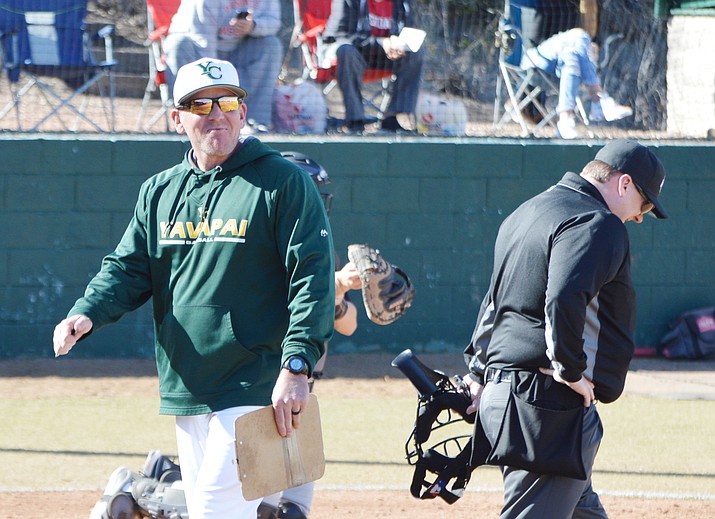 Yavapai College baseball coach Ryan Cougill, walking toward the dugout during a game against Glendale Community College on Jan. 31, 2020, is entering his ninth season at the helm of the Roughriders in 2021. Yavapai’s season was cut short in 2020 due to COVID-19. The NJCAA cancelled the season just 25 games in. (Brian M. Bergner Jr./Courier, file)

PRESCOTT — The 2020 season had all the signs of another JuCo World Series championship just waiting to be won by the storied Yavapai College baseball program nestled within the hills of Prescott.

A 22-3 (12-2 ACCAC) start last spring, one of the best in Roughrider history, was far better than the 2016 NJCAA championship club, which managed a 16-9 record through their first 25 games.

Dreams of another title were certainly founded in 2020. But then came the COVID-19 pandemic, and those dreams were shattered.

“Those kids that we he had last year, they were so easy for me to manage because they managed themselves,” Cougill said Thursday after practice. “I don’t know if we were the most talented team, but culture and chemistry [was] through the roof.

“Not getting to see them be in control [of the 2020 season due to COVID-19 cancellation] in what they had planned out was a real punch in the gut,” Cougill added.

Most of last year’s roster has moved on, despite the NJCAA allowing players to stay a “third year” in junior college to play baseball due to COVID-19.

“All of our players moved on, which is not necessarily the case around the country right now,” Cougill said. “There are clubs bringing back third-year junior college guys. Selfishly, I would take every one of them back [from last season].”

When Yavapai College opened the 2021 season Friday, a doubleheader sweep over Community Christian College (11-1, 11-2), only 10 of the 32 players on the roster had put a Roughrider uniform on before.

Led by sophomore shortstop C.J. Valdez, who is a preseason All-American and committed to Purdue, the Roughriders open the 2021 campaign with high hopes of getting to the JuCo World Series.

Lefty sophomore Taisei Yahiro is likely to be the ace on the mound this season for Yavapai, while sophomore hitters Danny Martin (committed to New Mexico) and Lance Kelly (committed to Nevada-Reno) look to fit nicely around Valdez on the lineup card.

“We’re ahead offensively, defensively and position-player wise from where I thought we would be. They knew how to prepare during winter, or COVID-19,” said Cougill, who wasn’t able to have the club play a full fall baseball season due to COVID-19. “But we’re behind on the mound, it’s 10 freshman that didn’t know what to prepare for.”

The top freshman arm to watch out for in 2021 is Joseph Silverio, a righty from Phoenix (Alhambra) who stands 6-foot-3 and should be either the No. 2 starter for Yavapai, or their closer.

Other notables on the mound include right-handed freshman Noah Turley, who is committed to Arizona, and freshman Matt Bachelier (committed to New Mexico State).

In the field and at the plate, sophomore newcomer T.J. Wheeler looks to see some time at designated hitter and first base, while freshman Jacob Police, a 2020 Prescott High School graduate, has already impressed the coaching staff with his work ethic.

“He has made a position change to the outfield, and he has put on 15 pounds from his senior year of high school,” Cougill said. “He took advantage of his downtime, which is unique for a freshman. He was mature with approach.”

Police will likely be the fourth outfielder for Yavapai this season, and see some lineup time against left-handed pitchers.

The Roughriders have strict protocols to follow each and every day between practices and games to avoid spreading COVID-19. Each player temperature checked and contract tracing is done every day.

“It’s been as safe as it ever could be,” Cougill said. “It’s a great setup, it’s becoming smooth and becoming normal.”

With so much time missed on the field in terms of a second-half of the 2020 season, a fall baseball season and team practice time (COVID protocols have players work in small groups), Cougill said his club has some growing to do.

“We’ve trimmed down our playbook. Instead of putting everything in before we play, we’ll do it as we go,” Cougill said.

Yavapai (2-0, 0-0 ACCAC) is scheduled to take on Salt Lake Community College on Tuesday, Feb. 9. The doubleheader may be played at Bradshaw Mountain High School’s turf field since the 24-plus inches of snow Prescott received last week soaked Roughrider Park.