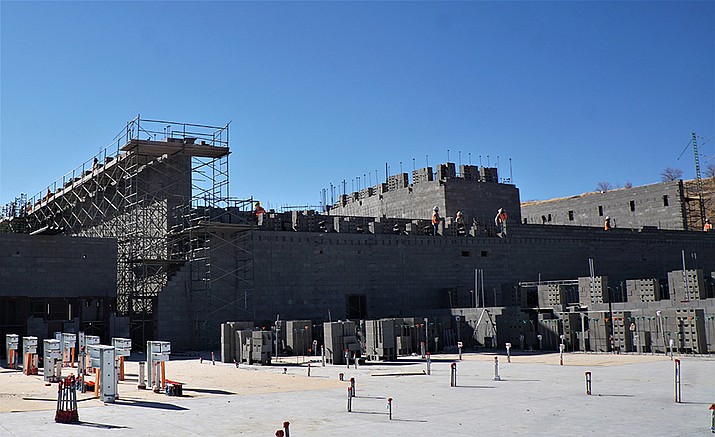 About 90 workers were on the construction site of the new Prescott Criminal Justice Center along Prescott Lakes Parkway on Friday, Dec. 3, 2021, and the contractor expects the number to increase to about 200 as the project progresses. Here, masons work to construct the block wall of the new jail building. (Cindy Barks/Courier)

Now about one year since Yavapai County approved a $63.1 million contract for the construction of a new jail and justice center in Prescott, the contractor says the project is nearing the halfway point.

Nicholas Schnabel, the project superintendent for the contractor, Hensel Phelps, reported on Friday, Dec. 3 that the construction is about 40% complete. About 90 workers were onsite this week, he said, including masons, steel erectors, site-utilities workers, electricians, mechanical contractors and plumbers.

As the project progresses, Schnabel said the number of workers on site would ramp up to about 200.

The county approved an initial $4.41 million contract with Hensel Phelps in August 2020 for the early stages of the construction, including ground clearing and mass grading, and then approved an amendment in December 2020 that brought the total contract cost to $63.1 million.

Brandon Shoults, assistant director of facilities for Yavapai County, said that contract represents the most costly project that the county has ever undertaken.

While the jail project was initially projected to be completed by summer 2022, Shoults said the new projected date for substantial completion is September 2022.

Then, county officials say it could take a month or two more for the jail to be ready for use. Yavapai County Sheriff David Rhodes told the Yavapai County Board of Supervisors in November 2021 that the jail would likely be opened by October or November 2022. 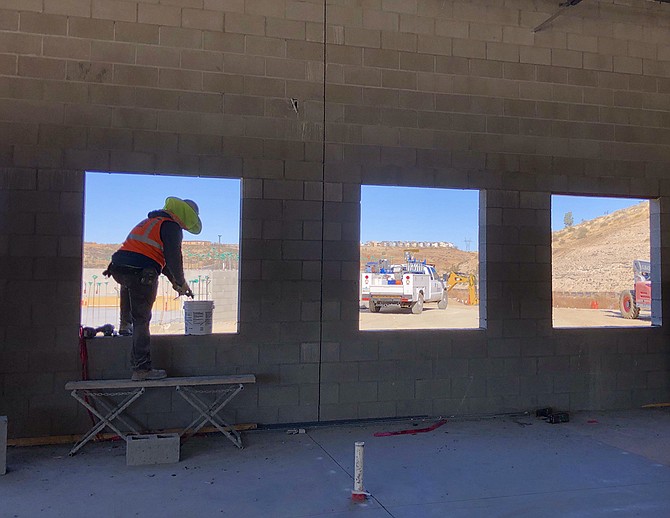 Construction is now about 40% complete on the new Criminal Justice Center along Prescott Lakes Parkway in Prescott. Work was underway on Friday, Dec. 3, 2021 on the series of buildings, including the Connections Center that will serve as the facility for mental-health evaluations and re-entry services for inmates. (Cindy Barks/Courier)

Shoults attributed the later completion date to the supply-chain issues that have been caused by the COVID-19 pandemic.

“We added 25 days to the existing (construction) contract,” he said, noting that the project has experienced significant delays in receiving structural steel for the project.

“Steel was really backed up,” Shoults said. The lead time for some of the steel products has been about 12 weeks, he said, compared to a typical two-three-week timeframe.

“We’re just seeing the big effects of the pandemic, and what it’s done to the supply chain.” Shoultz said. “It’s every sector, every industry, every supplier.”

As the assistant director of county facilities, Shoultz said he spends about 30% to 40% of his time at the jail construction site. The county also contracted with the Phoenix-based Kitchell firm to serve as the owner’s representative, and Kitchell Project Manager Sammy Evans is also on site at the project to serve as the county’s agent, looking out for its interests.

The county awarded the contract to Hensel Phelps on a construction-manager-at-risk basis, which means that the two parties agreed on a guaranteed maximum price of $63.1 million.

Shoultz and Evans note that the total includes $2.9 million in contingency funds for unexpected design and construction issues. Some of that has already been used to cover overtime for workers in order to get more work done during the mild weather, Shoultz said. 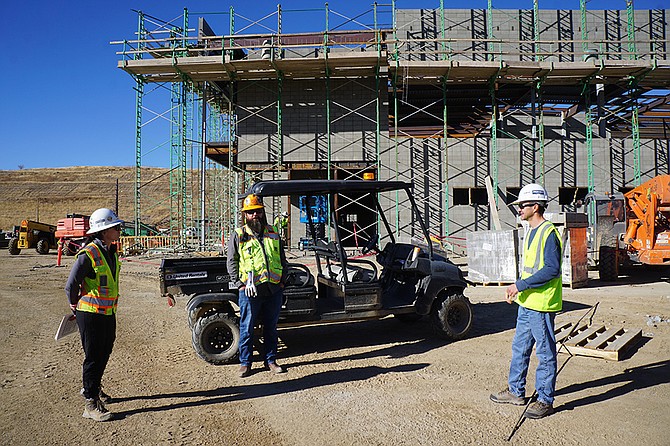 A two-story court building is a part of the $63.1 million new Criminal Justice Center that is under construction along Prescott Lakes Parkway in northeast Prescott. Here, Sammy Evans, project manager for Kitchell, the owner’s (county’s) representative, left, Nicholas Schnabel, project superintendent for the contractor Hensel Phelps, center, and Brandon Shoults, assistant director of facilities for Yavapai County, right, discuss the progress on the project on Friday, Dec. 3, 2021. (Cindy Barks/Courier)

The new Yavapai County Criminal Justice Center encompasses a number of inter-connected buildings, including a court section that will house two courtrooms, the actual jail residence section with 152 beds, and a Connections Center, which will serve as a place for mental health evaluations and re-entry services for inmates.

The jail project faced considerable community opposition — especially in the summer/fall of 2020 before the Board of Supervisors’ approval of the contract. Concerns have continued from residents who live nearby about the procedure the county will use for releasing inmates into the community.

Officials say the project’s Connections Center is being planned to alleviate those issues by ensuring that inmates who are being released have access to the necessary services to re-enter the community.

Schnabel, who also served as the project superintendent for the 2017 to 2020 construction of the Maricopa County Jail on Durango Street in Phoenix, said the new jail in Prescott is unique in having all of the services on-site.

“This is the newer model,” Schnabel said, noting that although the Maricopa County Jail also has courtrooms located at the jail, it does not have the connections services on-site.

Shoultz added that the Prescott facility is intended to be used for relatively short-term stays of about 14 days. Longer jail stays will be in the Camp Verde jail, and those with sentences of a year or more are typically sent to prison.

After the completion of the jail and Criminal Justice Center, the county plans to begin work on renovating the Gurley Street building that currently serves as the Sheriff’s Office and a jail intake facility. Shoultz said that project is estimated at a cost of $10 million, and construction is expected to start in January 2023.