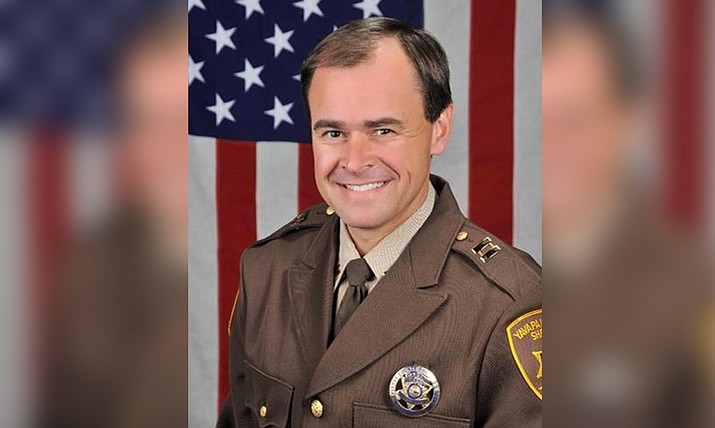 Sheriff David Rhodes was cited for operating a boat under the influence (OUI) Saturday, Aug. 7, at Lake Powell, and out of accountability and transparency he has come forward.

At the end of a day of boating with friends, he tried unsuccessfully to help a friend park a boat at the Wahweap Marina at about 6:25 p.m., clipping another boat in the process, the Coconino County Sheriff’s Office confirmed Thursday.

Rhodes, who told the Courier he had been drinking that day, was cited by the National Park Service with a possible OUI, a Class B misdemeanor. The charge is for a BAC (blood-alcohol content) of 0.08 or more.

“I deeply regret my actions and have learned from this mistake,” Rhodes said in a statement. “I am sure you are disappointed and that is fair, however I am more disappointed in myself. I want to assure you that I will always be honest with you even in the tough times.”

Rhodes, who is in his first term as Yavapai County sheriff, said he believes whole-heartedly in transparency.

“As your sheriff, I have spoken many times about the need for accountability and truthfulness among our elected officials and especially law enforcement officers. Transparency is a critical (tenet) of our democracy,” he stated.

During the day, while he and his family were boating on Lake Powell, the group “had a designated driver for the boat I was riding on, and I was drinking and enjoying the lake. Friends in a second boat were following for the day.

“Upon returning to the marina, they had difficulty parking their boat back in the slip,” and after calling the marina for help — though they had gone for the day — they “asked for my help.”

Both the boat owner and Rhodes attempted without success to park it in the slip, doing minor damage to a neighboring boat. “I decided that we needed to stop, and eventually found someone else to help. National Park Police were waiting for us on the dock.”

Rhodes said he cooperated fully with law enforcement and is taking responsibility for his actions.

“I was cited for operating the boat while intoxicated. I am subject to all the same consequences as any other citizen, and I accept those consequences. I did not attempt in any way, nor would I ever, to use my position as sheriff to impact their decision,” he stated. “As I always say, am grateful to the police for keeping the public safe.”

Rhodes added that “even I, who knows the law well, thought that ‘just docking the boat’ would be safe, but I was wrong. I should not have taken control of the boat at all.

Brett Axlund, chief deputy for the Coconino County Sheriff’s Office, said incidents such as this are fairly common on Lake Powell, especially when winds are picking up.

“It’s a pretty standard report, when we’re seeing up to 10 mph winds,” Axlund said, referring to similar conditions on the lake Saturday. “It is typical.”

Calls by the Courier to the National Park Service, seeking further details, were not immediately returned.

According to the Find Law website, an OUI is not the same as a DUI (driving under the influence); the DUI affects the suspect’s driver’s license, while an OUI in a boat does not.