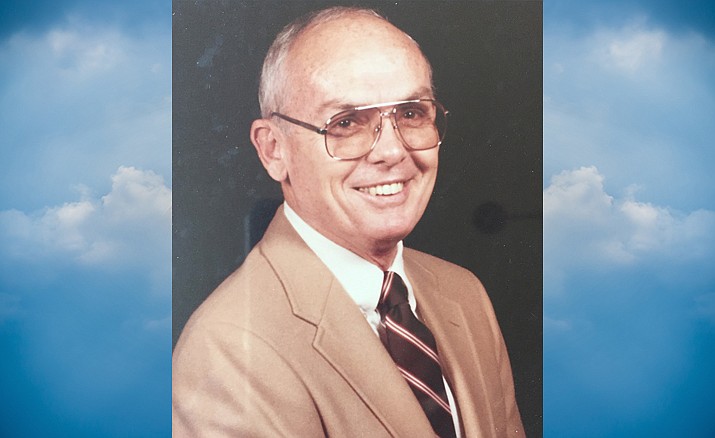 James William (Bill) Helfinstine peacefully passed away at home, surrounded by family, on April 23, 2021, at the age of 92. He was born in Globe, Arizona, to Frank and Mabel (Stanfill) Helfinstine on Dec. 7, 1928, and was a third-generation Arizonan. He deeply loved his parents who were married over 60 years.

His mother, called “Mamoo” by her grandchildren, was born in Mexico in 1903 while her father temporarily worked as a miner south of the border. She managed the household, sewed with a foot-operated Singer sewing machine and cooked delicious meals. His father was born in Eloy, Arizona, the son of a dairy farmer, and worked for Mountain States Telephone from age 21 until he retired 44 years later. He spent most of his time in the field and performed duties as an electrician, lineman and service foreman. He installed the telephone poles and strung the telephone lines from Globe to Tucson. The family moved to Tucson in the early 1930s where Bill and his older (deceased) sister, Louise, attended grade school, Mansfeld Junior High and Tucson High.

Bill learned baseball from his father and the two played catch and talked baseball many afternoons when his dad arrived home from work. He played summer ball but never played high school baseball because the coach said he was too small. However, after graduating high school at age 16, Bill grew nearly a foot. He tried out for the University of Arizona baseball team, coached by Pop McHale, and won the position of starting short-stop his freshman year. An ankle injury sidelined him during much of his sophomore year, but he returned as the starting second baseman for his junior and senior years.

The team enjoyed much success during this time. They won the Border Conference playing against other colleges from the southwest and narrowly missed a trip to Omaha, Nebraska, for the College World Series. He was known for outstanding defense while batting over .300 in his best year.

During the summer between his junior and senior years he and his college teammates played semi-pro baseball in the mining town of Santa Rita, New Mexico. The townspeople regarded the players as heroes after winning their first game, beating arch rival Hurley, a neighboring mining town.

The team finished with a record of 10 wins against one loss.

Bill loved the U of A and his college fraternity, Sigma Chi. He lived in the fraternity house, worked in the kitchen during his four years at the school, and maintained life-long friendships. He studied journalism and wrote a column and edited the Sports section of The Wildcat college newspaper. His sports column earned All American honors.

Shortly after graduation in 1950, he married U of A coed Jan Bragg. The couple moved to Phoenix and over the years had four children Mike, Scott (Nancy), Kelly Waring (Bob) and Jim (Mariann). Bill worked as an investment advisor for most of his adult life and preached that people should live within their means and save for retirement. He successfully mentored all four children in the field of financial planning, three of which began their careers working in his office.

Bill turned 13 on Pearl Harbor Day and World War II made a huge impression on him. He knew many who served during the war, some who lost their lives, and several of his teammates were war veterans.

He read numerous books detailing the accounts of the fighting in the Pacific and in Europe and enjoyed biographies of notable Americans and sports figures.

His most enjoyable hobby was coaching baseball at multiple levels including Little League, Babe Ruth, American Legion and All-Star teams. Kids always wanted to play on his teams because he stressed fundamental skills that helped them improve. He was a serious coach and expected 100% effort from his players, but benefited from a terrific sense of humor which came in handy since there was always lots to laugh about when young boys were learning the game. He enjoyed the respect of all the players and coaches and his teams won far more games than they lost.

Bill and Jan divorced in 1975 and he began a new chapter in his life raising adolescent son, Jim. Later, he moved his elderly parents into his home and cared for them until their deaths. In 1998, Bill moved to Prescott to be near his children.

He later married widow Liz (Richmond) Colter, the sister of one of his teammates, whom he first dated at the U of A in 1947. The two enjoyed happy years together with many common friends and 50 yard line season tickets for U of A home football games. They traveled to Canada, Europe and Russia visiting historical landmarks and learning about the places they visited. His favorite trip, to Normandy, included intense tours of museums, battlefields, and the beaches made famous by the D-Day invasion. He believed in the goodness of America, held veterans in high regard, installed a flagpole in the front yard of our Phoenix home and proudly raised the America flag each morning.

Bill loved dogs for their companionship and unconditional love.

His two favorites were dogs he inherited from his kids, a black lab named Jesse and later a pit bull named Jaws. For years one of these dogs would accompany him on his daily early morning walk.

In his final years he constantly expressed gratitude for his family and how wonderful it is to live in Prescott with all four kids nearby.

He especially enjoyed regular family lunches at local restaurants where they became regulars. He was ever grateful for a very good life and benefited from excellent health until his final months.

Special thanks to those who cared for him including caregivers at Synergy Home Care, Maggie’s Hospice, and especially Lauri Stella.

A Celebration of Life will be held at the home of Jim and Mariann Helfinstine on the afternoon of April 30, 2021.