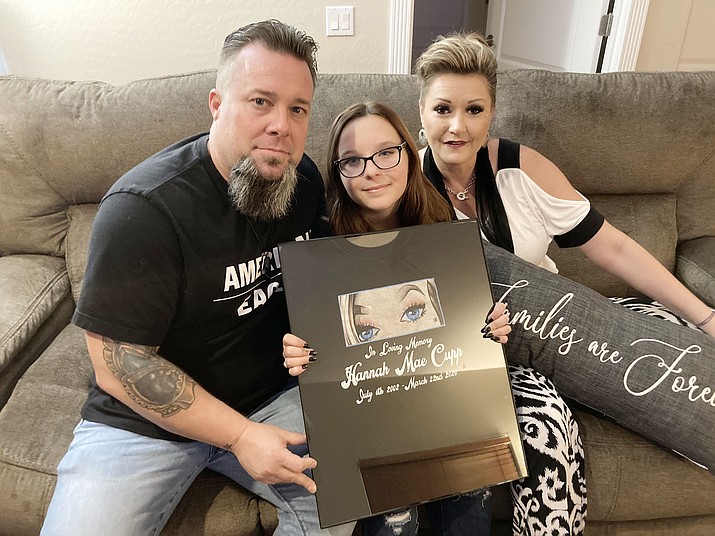 The Cupp family holds a T-shirt tribute to their daughter, Hannah Mae Cupp, who died of fentanyl intoxication on March 22, 2020. She was 17. Pictured are parents Mike and Sommer Cupp with 12-year-old sister, Randi, center. According to MatForce’s Overdose Fatality Review Board report, fentanyl was detected in the system of 42 of the 82 deaths chronicled. (Nanci Hutson/Courier, file)

The drug abuse epidemic in Yavapai County is real — and illicit fentanyl is clearly a culprit.

Overdose deaths in 2020 suggest an alarming trend, with younger teens and senior citizens alike among the 82 deaths chronicled through MatForce’s annual Overdose Fatality Review Board report. All of the deaths were documented through the state Medical Examiner’s Office.

MatForce, the Yavapai County substance abuse prevention coalition, started the review board in 2016. Since then, this type of effort is starting to be adopted by other counties across the state and in other states to provide real-time information and interviews with families about the deaths to prevent future ones.

In a recent webinar to reveal the latest overdose death statistics, Yavapai County Sheriff David Rhodes congratulated those who engaged in what is a “painstaking process” intended to inform and enlighten the community to the fatal realities of some of these drugs, with fentanyl now one of the most potent.

One 17-year-old girl in Prescott Valley, Hannah Cupp, died in March 2020 after touching a pill laced with a powerful derivative of the illicit street drug, according to her parents who viewed a videotape of her tossing a pill into the garbage prior to her death.

“This information is absolutely critical for decision makers, policy makers and on funding decisions on how best to attack and respond, how best to begin to make a dent in the amount of overdoses we’re seeing in our community,” Rhodes said.

Of 82 deaths, the review board was able to delve into 76, with 24 family interviews to help determine some contributing factors such as family substance abuse, mental and physical illness, suicide attempts, and treatment efforts.

One of the startling results of those reviews showed that 52 of the 76 who died experimented with alcohol and marijuana in their early youth. Of the 24 cases where families were interviewed, 16 died of a mix intoxication of drugs, including fentanyl, with 10 deaths attributed to fentanyl alone. In 42 of the 82 deaths, fentanyl was detected in the system.

Yavapai County Attorney Sheila Polk, a founder and chairman of the MatForce board, said she is “very proud” of this time-consuming work that gives a deep dive into the people behind the fatalities so as to save lives in the future. This review identifies trends and commonalities between overdose deaths so that advocacy, mental health, law enforcement and other agencies working with teens, adults and vulnerable populations can use the data to address issues that contribute to these losses, she said.

MatForce Executive Director Merilee Fowler said these reviews reveal some stark realities: since 2017 drug overdoses have been on the rise. In just one year, 2019 to 2020, Fowler said the county saw a 20% spike from 68 deaths to 82.

What the data does not reveal is how many lives were spared because of the now availability of the opioid inhibitor Naloxone, Fowler said. Kits and nasal spray are available through various agencies, including MatForce, and at pharmacies without a prescription.

One of the more disturbing statistics Fowler shared was the number of teens between the ages of 14 and 19 over the last two years who have died due to drug overdoses: nine. In 2020, there were five such fatalities, all involving illicit fentanyl.

One in four of all of the overdose deaths are young adults between 20 and 29.

Fowler said the statistics, too, show a reemergence of methamphetamines — 29 of the overdose deaths were linked to what is now a cheap drug choice.

In most of these deaths, Fowler said there is multi-drug intoxication.

To Fowler and other review board members, though, these statistics mean little without community action.

All urge parents to talk with their children about drug use. Social media can make it appear appealing, even safe, and yet the reality is counterfeit fentanyl is lethal and it can be easily disguised in pills that are not viewed as harmful.

Parental controls on social media and cellphones should be employed, and teens need to be unafraid to talk with parents and other respected adults about what they know and what they are experiencing when it comes to peer pressure or simple curiosity, Fowler and her fellow panelists said.

Though parents may think they have no influence over their teens, Fowler and the others assured parents’ still wield a lot of power.

The key is constant, non-judgmental conversation about these topics so that teens know their parents care and want to help them safely navigate their way through adolescence, they said.

“I just want to say thank you to the families who talk to us about what was happening with their family members at the time of their death,” Fowler said. “We know how painful this is for them. And we assure them that we are doing this so we can come up with solutions to try and prevent more of these deaths.”