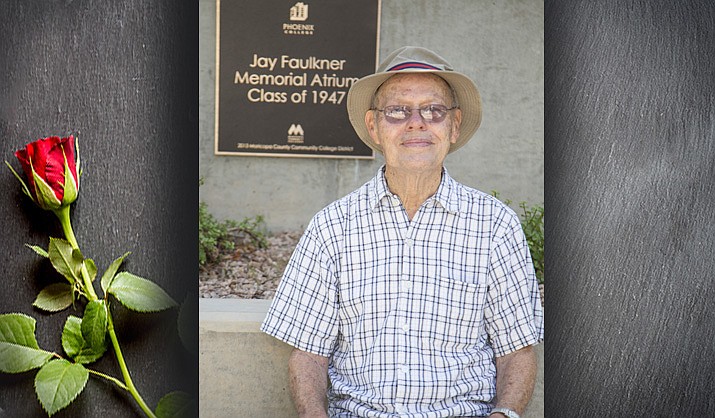 Jay graduated from Alhambra Grammar School and North Phoenix High School. On the campus of Phoenix Junior College, he was a leader in many campus organizations including the exclusive President’s 13 Club and the Los Vaqueros horseback riding group. Also, he was the freshman/sophomore badminton champ. Graduating college during the WWII era, Jay became administrative assistant to the chief pathologist at the Phoenix Veterans Administration, then transitioned to office administration at major Arizona mining operations before moving to California and working for two decades at American President Lines, an international steamship company.

He spent the next 25 years of his retirement enjoying his Mendocino Ranch located north of San Francisco between the towns of Gualala and Point Arena, among the redwoods, just a mile from the ocean. There he dedicated himself to community service including establishing the Coast Community Library at Point Arena, which became a part of the Mendocino County Library system. He also volunteered with the Point Arena Senior Center and the Point Arena Food Bank.

Returning to Arizona in 2000, he continued volunteering at the Open Door Food Bank in Prescott as well as the Augustana Lutheran Food Bank. At the Mount of Olives Lutheran Food Bank in Phoenix, he taught English as a second language. Wanting to give youth today the positive, supportive and rewarding experience he enjoyed at Phoenix College, in 2004 he established and continued to give to what has become a substantial scholarship endowment to help students in the college’s ACE (Achieving a College Education) program. The ACE program was created to remedy the school dropout problem in Arizona by helping at-risk high school students complete their education and get an early start on college. Jay’s endowment gift is the largest alumni private scholarship donation in PC’s history and across all the Maricopa Community Colleges.

In 2014, in recognition of his contributions to the college and the community, the Jay Faulkner Memorial Atrium was dedicated in his honor in the newly renovated Hannelly Center and Jay was celebrated and named to the Phoenix College History Maker’s Hall of Fame. In 2020, the college created the Jay Faulkner Memorial Mesquite Court, an outdoor seating area for students, staff and the community to gather. Jay’s endowment gift is the largest alumni private scholarship donation in PC’s history and across all the Maricopa Community Colleges. To donate to the Jay Faulkner Endowment for ACE, go to mcccdf.org/donor/jay-faulkner or call Phoenix College Development Director Deborah Spotts at 602-285-7667.

A private memorial is being planned. Memories and condolences can be shared in the online Guest Book at obits.azcentral.com.