Joint column: A shared message of unity about our law enforcement officers 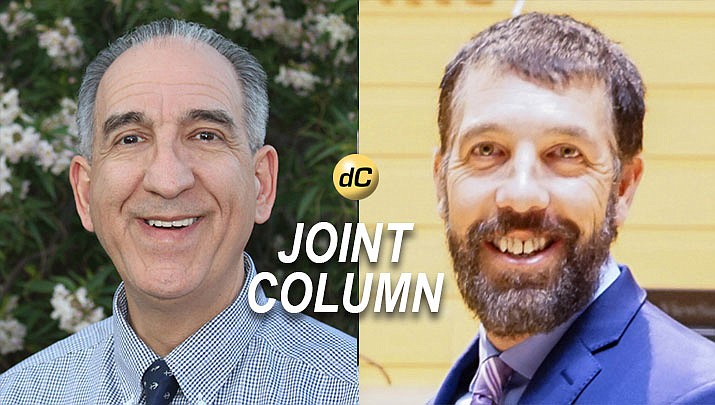 This is a column coauthored by Prescott Valley Mayor Kell Palguta and Prescott News Network Editor Richard Haddad. It is intended to clarify and unify following the publication of an editorial opinion cartoon that published in the Tuesday, April 20, edition of The Daily Courier.

The cartoonist’s image depicted two men seemingly discussing getting the COVID-19 vaccine, when the darker skinned character replies, “That’s not the shot I’m worried about,” glancing out the window toward a police patrol car. The cartoonist, Dave Whamond, was expressing his opinion that there are people of color who are concerned about their safety when encountering police officers, which has been a heavily discussed topic in the news following several high-profile incidents in other parts of the country.

The cartoon struck a nerve with some readers who felt it was disrespectful to our local law enforcement officers. Others felt it shined a light on a topic that the paper has not addressed often enough.

“It was not the newspaper’s intention to disrespect our local law enforcement officers. Anyone who has been reading The Daily Courier, Prescott Valley Tribune or Chino Valley Review over the years can see that the papers hold local law enforcement in the highest regard and the employees have supported their efforts with stories, editorials, staff-written columns and have even partnered with different police agencies to make good things happen. We work to highlight their achievements, keep the public informed about their efforts to protect residents and businesses, share stories of their volunteer work and how officers often go the extra mile to truly ‘protect and serve’ on a level that the community should be proud of. We are fortunate to have some of the best officers working in our police and sheriff departments. As for the cartoon, we accept responsibility for not recognizing how some readers may have perceived it, and in hindsight we should have been more sensitive about the tone of the cartoon, especially given the current climate. As my editor’s column on the same page that day expressed, ‘We can change the world if we start talking to one another again.’ That’s what this joint column represents — a mayor and an editor of a community talking to one another to unify instead of divide.”

For the Mayor’s part, his comments admittedly caused more division and misunderstanding, which was not his intention. He explains:

“I initially posted a message on social media condemning the Courier for publishing the cartoon, and inadvertently painted a picture that the newspaper was anti-police or deliberately trying to create a racial divide. I later updated my post to say, ‘As you may already know I feel very passionate about this topic and I tell people how I feel in a not so politically correct way...I need to say that the Prescott Courier has been positive to police in the past and that this editorial cartoon although ‘in’ the Courier should be assumed that it does not reflect the ‘opinion’ of the Courier. I will reiterate the importance of our community rising above the national rhetoric that is also used to divide communities, neighbors and friends.’

“It is no secret I wear my emotions on my sleeve and am passionate about our local law enforcement. So when even the slightest perception of the opinion cartoon alluded to our law enforcement officers being painted in a negative light I instinctively went to their defense. I did so because I know what it is like to leave my family every day to protect a strangers family. I will never back down from defending the good officers of our community. After speaking with Richard I know that he and I are on the same page.”

It’s understandable that the Mayor is passionate about this topic and swiftly acted to defend local officers and deputies. He himself is a retired police officer and knows firsthand the challenges the job holds, and the quality of the officers he served with in this community. His passion had good intentions.

The Mayor adds, “It is unfortunate that a lot of times in today’s world perception is reality and when it comes to national news that perception blurs over into local news. We as a community are stronger when we communicate effectively with all citizens and we all work on focusing on the same goal which is to make our community better for the future. We cannot ever let outside national noise blur into our local community.”

In this case, the Courier is a local, family-owned business just like so many other businesses here, and has its headquarters in Prescott Valley. It works to provide news that no one else covers, and supports the community through numerous programs and initiatives, not to mention contributing to local jobs and tax revenues to strengthen the economy. The Mayor concedes that attacking a local small business in his community was not his intention, just as the newspaper concedes that attacking local law enforcement was not its intention. Both the Mayor and the newspaper recognize that the work we do is very visible, and missteps can be damaging to the community we both strive to serve.

Recognizing this, we affirm that both agree we are grateful for our police officers and deputies who place their lives on the line every day to protect the residents who live here. Prescott, Prescott Valley, Chino Valley and Yavapai County enjoy some of the safest communities in Arizona, in large part because of the quality of the law enforcement community and the people who support them. We also recognize and thank the families of our law enforcement officers, for we know that each time they leave their homes there is an element of uncertainty that loved ones must live with every day.

Opinions will still be shared, whether on opinion pages or Facebook pages, but the shared opinion of the two authors of this column is unified, we respect and support the men and women in blue in the Quad Cities.