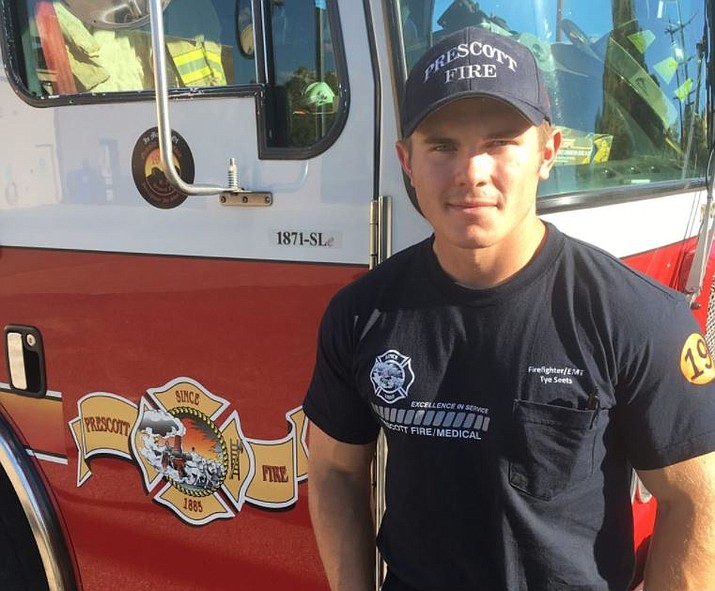 This undated file photo was taken of Tye James Seets when he was with the Prescott Fire Department. Seets died of a self-inflicted gunshot wound March 17, 2021. His mother, Amy Seets Moore, spoke at a town hall meeting Tuesday, April 6, that was hosted by Mayor Greg Mengarelli and focused on mental health resources for the community. (Courtesy)

Prescott firefighter Tye Seets was a devout young husband, father and “prankster” in the prime of what his beloved mother described as a “picture perfect life.”

A home-grown patriot who enlisted in the Army with a deployment in Afghanistan after graduating Prescott High School in 2012 was the first of the third generation of Seets to earn such a diploma. Seets exemplified courage, faith and unflagging devotion to family, friends, colleagues and community.

A lifelong baseball player who boasted a wicked fastball and was an accomplished hunter, fisherman and all-around outdoorsman, Seets was someone who found solace in Prescott’s natural beauty, his mother declared.

This proud country boy with an “unparalleled work ethic,” and whose word was his honor, was remembered by his mother and Mayor Greg Mengarelli as someone others quickly embraced. His charm, wit and loyal bond with friends and family are what made him so beloved to so many, they said.

Yet Tye’s life was far from perfect, his mother, Amy Seets Moore, admitted Tuesday, April 6, at a town hall meeting where she recited reflections included in his recent obituary.

The love showered on him by all who knew and loved him, and the love he showered back on all them, including his young daughter and son, was not enough to defeat the post-traumatic stress disorder “demon” that, ultimately, was the cause of his far too early death March 17.

Tye Seets, 26, a civil servant known to put others above self, died of self-inflicted gunshot wound.

On that day three weeks ago “my world came to a shattering halt,” Moore declared Tuesday during the city’s second mental health forum hosted by Mayor Mengarelli that was attended by about 60 people both in-person and on Zoom.

Admitting that she would give anything not to be sharing such a tragedy, Moore, too, said she could not bear to stay silent if Tye’s life and mental health journey might spare family a similar grief.

Like so many, Tye opted to hide his symptoms and angst, believing he could conquer it on his own.

Aware he suffered with some disturbing military-related memories, Moore said Tye downplayed his anguish, determined to power through as he so aptly did in every other aspect of his life.

Prior to suffering such a life-altering heartbreak, one from which she will never recover, Moore said she wasn’t one who would push counseling or mental health therapy to cope with one’s life struggles.

To care for one’s mental health is no different than seeking chemotherapy to treat cancer, advised Moore and several area mental health providers.

The COVID-19 pandemic has illuminated the need for more mental health intervention as people of all ages wrestle with isolation and depression, with suicides and overdoses continuing to climb in a county that is already experiencing numbers higher per capita than many other communities across the state.

Yavapai County Community Health Services Director Leslie Horton shared some sobering statistics, including 31 deaths of those 17 and younger up from 18 the year before, including suicides and overdoses.

In the older populations, too, suicide and overdose death rates are alarming, more than twice as high as other counties across the state.

Overdose deaths in Yavapai County increased from 82 in 2019 to 86 in 2020 with no indication those numbers are dropping anytime soon, she noted.

Yavapai County is fortunate to have a number of mental health agencies at the ready to offer a variety of counseling and therapy services, and law enforcement agencies focused on better training to address mental health ailments that result in criminal behavior, the mayor emphasized.

The forum included a panel of several leading mental health agencies, as well as Prescott’s interim Police Chief Amy Bonney, to talk about the efforts underway to make mental health care more accessible and palatable to both individuals and families.

West Yavapai Guidance Clinic Chief Executive Officer Tamara Player commended Moore’s courage for her willingness to share her tragedy so as to make a difference for others.

Such conversations are key to tearing down the stigma and enabling people to reach out for the help that is available.

A parent of five adult children, Player said she is fortunate that when her seemingly well-adjusted teen son expressed troubling thoughts about his future a friend told a parent who alerted their family.

They were then able to get him counseling so today he is a thriving adult.

“There is no shame in asking for help, and there is help available,” Player said, noting her agency is offering free counseling to those impacted the pandemic and offers a variety of free webinars to assist families with everything from parenting to senior isolation.

West Yavapai Guidance Clinic, the largest mental health care provider in Yavapai County, operates a 24/7 Crisis Stabilization Unit and has some 46 programs and services to offer individuals and families.

Spectrum Health Care and Terros Health Care also shared their services, including mobile crisis teams able to respond to someone at their home, workplace, or other location of a mental health emergency.

Indeed, Yavapai County has numerous social service and nonprofit entities at the ready to provide resources, even if that is rental assistance or shelter for someone experiencing domestic violence. Many can be accessed by dialing 2-1-1.

It may be too late to spare Tye from his hidden hurts, but his mother implored the audience to take heed as it is not too late for them to seek help for themselves or their loved ones. The mayor, too, emphasized the willingness of this community to provide these much-needed services.

Moore said she knows her son would be devastated to think he had caused such pain to those he loved so much.

“Reach out, speak up, be honest. There is no shame,” Moore said. “You are loved. You are valued. If you’re struggling, get help.

“Do not let my precious boy’s life be in vain.”