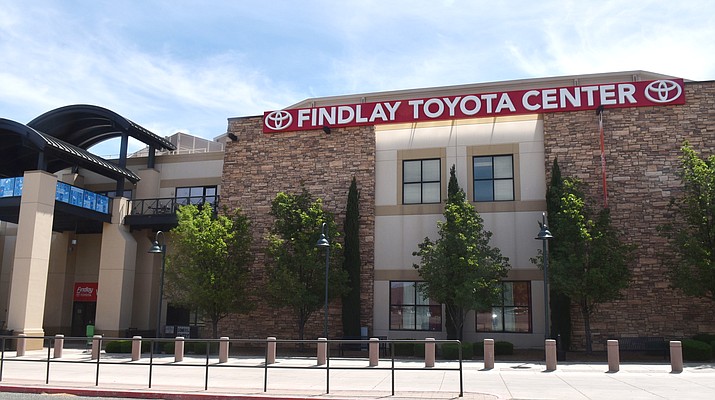 On a snowy day in late January, Spectrum Health Care opened the Findlay Toyota Center as a mass COVID-19 vaccination site, officially calling it a POD (Point of Dispensing) for the Moderna vaccine.

Now, they’re ready to close it.

Spectrum Health Care announced Tuesday, April 6, that they would be closing the POD location at Findlay Toyota Center in Prescott Valley.

With the now plentiful supply of the more than one-type of the no-cost vaccine at multiple locations, including retail pharmacies, Spectrum has seen a drop-off in demand for the mass vaccination site.

Based on those changes, Spectrum Chief Executive Officer April Rhodes announced the nonprofit health care agency will close the mass vaccination station at Findlay Toyota Center as of Wednesday, April 7, reopening in a temporary clinic space on April 10 at the Arizona Dermatology Suite at 3001 N. Main St., suite 1E, in Prescott Valley.

On that snowy January day, the Spectrum team assisted by FEMA staff and some 50 community volunteers started to handle appointments for those in the top eligibility categories. Spectrum, too, assisted in vaccinations of both the Prescott Unified and Humboldt Unified school district employees on a central district campus site.

Along the way, Spectrum experienced some snags; snowstorms delaying deliveries and lower vaccine doses than ordered through the Yavapai County Community Health Services.

Yet their staff and volunteers persevered as one of two west Yavapai County mass vaccination sites – the other is in Prescott at the former Sears building operated by Yavapai Regional Medical Center.

Spectrum, too, operated a mass vaccination site in Cottonwood and offered mobile vaccine distribution for some of the county’s more rural communities, including behind the Jerome fire station as vaccines became more plentiful and more people were eligible.

In the course of the last 11 weeks, Spectrum managed to fully vaccinate just under 58,000 people through their sites in both Prescott Valley and Cottonwood. On average, Spectrum staff have been assisted by some 45 volunteers each day.

“It has truly been a privilege for Spectrum to be a part of the vaccination efforts in Yavapai County,” said Rhodes, who thanked all the staff, volunteers, FEMA partners and others in Yavapai County who played a role in what she called a successful, meaningful endeavor. “I am incredibly proud of the role Spectrum has played in helping the county get back to some sense of normal. It is our mission to meet the needs of the communities we serve, whatever that may be, now and in the future.”

Anyone with first or second-shot appointments after April 10 are invited to do walk-in appointments at the new facility, the Arizona Dermatology Suite at 3001 N. Main St., suite 1E, in Prescott Valley.

The new clinic space will be available three days a week – Saturday, Sunday and Monday from 8 a.m. to 4 p.m., offering first doses until April 17 and second doses through May 15.

Appointments and walk-ins will be accepted.

Spectrum, too, intends to continue to offer vaccines at its other health care facilities in Prescott, Cottonwood and Camp Verde. Beginning the week of April 12, the Cottonwood vaccination station will be open Wednesday, Thursday, and Friday from 8 a.m. to 4 p.m. through May 14. Walk-ins will be accepted.

And the agency will be expanding its outreach.

Through its Anywhere Healthcare team, Spectrum will be bringing vaccines to homebound patients across the county. The agency, too, as needed, will also provide the mobile clinics.

Anyone wishing to schedule an appointment can do so online at www.spectrumhg.org/vaccine and walk-ins will also be accepted. For those in need of homebound appointments, call 1-844-WhereUR to book a time.