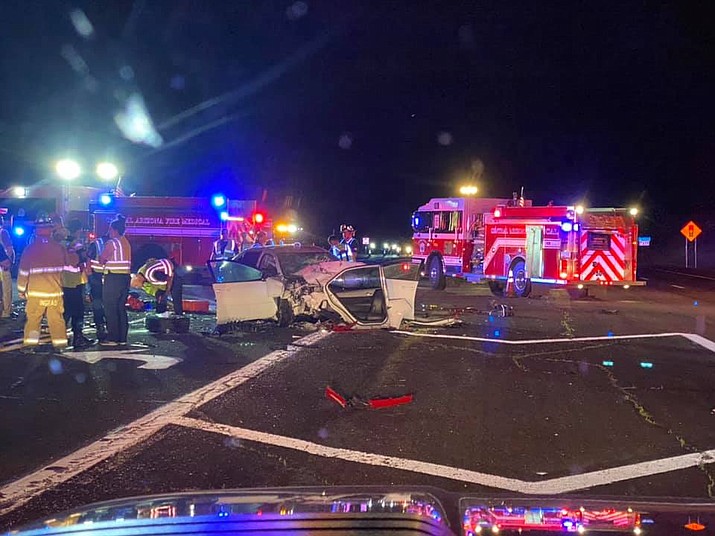 A Toyota sedan sits in the middle of Highway 69 after a 27-year-old male driver, a 25-year-old female passenger, and two children ages 6 and 1-month, were hit head-on by a Dodge Challenger on Sunday, April 4, 2021, in Dewey-Humboldt. The two adults and two children were airlifted to Phoenix-area hospitals. The 67-year-old male driver of the Challenger was arrested on DUI charges. (CAFMA/Courtesy)

Two adults driving in a sedan with two children were flown via helicopter to Phoenix-area hospitals after they were involved in a three-vehicle collision on Highway 69 in Dewey-Humboldt on Sunday night.

David Browne, 67, allegedly driving the vehicle that caused the collisions, was arrested and charged with DUI, according to Arizona Department of Safety (DPS) Media Relations Specialist Bart Graves on Monday, April 5.

The collision occurred at approximately 6:47 p.m. Sunday evening, April 4, near Kloss Avenue on the highway and involved a Dodge Challenger, Kia Soul and Toyota Corolla. 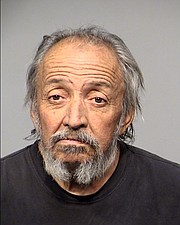 David Browne, 67, was arrested and charged with DUI after hitting two different vehicles Sunday, April 4, 2021, in Dewey-Humboldt. The second vehicle Browne hit, a Toyota sedan, had two adults and two children, all of which were airlifted to Phoenix-area hospitals for injuries. (YCSO/Courtesy)

Graves said the preliminary investigation indicates Browne, driving the Dodge Challenger, possibly ran the stop sign where Kloss Avenue connects with Highway 69 and struck the Kia Soul, which spun out. The driver of the Kia Soul was left with no injuries.

Shortly after hitting the Kia Soul, Browne then hit the Toyota sedan head on, the preliminary investigation indicates.

Four people were in the Toyota sedan, including a 1-month-old infant girl and a 6-year-old boy.

It is unknown if the adults and children are related.

No other details were released. Watch The Daily Courier and dCourier.com for more.