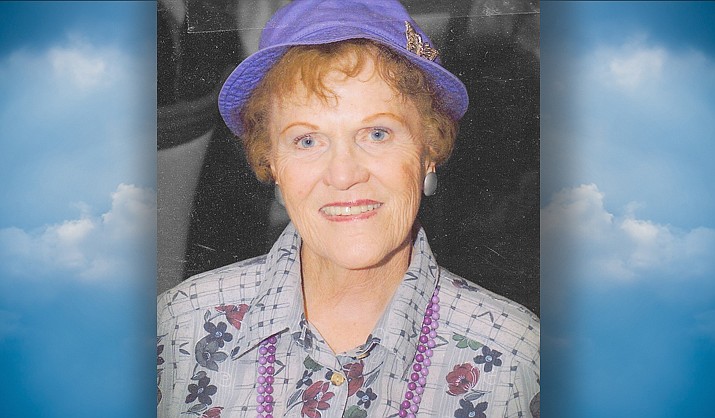 Patricia Ann Thurman has danced to Heaven and into her Lord’s open arms on February 24, 2021. We imagine her beloved husband Bill, daughter, Teresa, and son, Jake were there to greet and welcome her.

Patricia lived a rich and full life. As a devoted Catholic, Pat served as president of the Alter Society; volunteered at St. Vincent de Paul’s thrift shop (contributing to their sales as a customer wholeheartedly); and took holy communion to the homebound. One of Patricia’s proudest moments as a mother was witnessing her son, Christopher, take his final vows as a Benedictine Monk.

Great Falls, Montana was Pat’s birthplace and beloved home. Montana was a fabulous place to grow up and Pat’s family enjoyed hearing many delightful stories of her youth and how she met their father, Bill. When Patricia and Bill were in their 40’s, Bill was transferred to Simi Valley, California, where the adventures of raising their eight children continued. Ten years later, Bill was transferred to Saudi Arabia and Patricia joined him overseas for a very special time of their lives together. Bill was a high ranking officer with the Corps of Engineers and was engaged in the development of the King Khalid Military City (KKMC). Pat had always been an artist for her own pleasure. As she got older, she received formal education and became an accomplished artist in water color and oil painting. While Pat was in Saudi Arabia she taught art to the residents of KKMC.

In 1982, Bill and Patricia returned to the United States when Bill contracted cancer. They purchased a piece of property in Prescott with plans to retire. After Bill passed away, Pat continued her artistic endeavors in Prescott with many of her paintings being displayed for sale in local restaurants and offices.

Patricia was determined to live to 90 and she accomplished that goal. Her life was meaningful and important, and her legacy is being lived out by her children, grandchildren, and great grandchildren. The family wishes to extend their heartfelt thanks to the compassionate, caring employees of The Cottage at Highgate Senior Living, and Maggie’s Hospice.

A Celebration of Patricia’s Life will occur at a Mass at 11 a.m. on April 30, 2021, at St. Germaine Catholic Church in Prescott Valley. A Rosary will proceed the service at 10:30 a.m. This service will also honor Patricia’s son, Jake Thurman, who passed away on December 15, 2020.