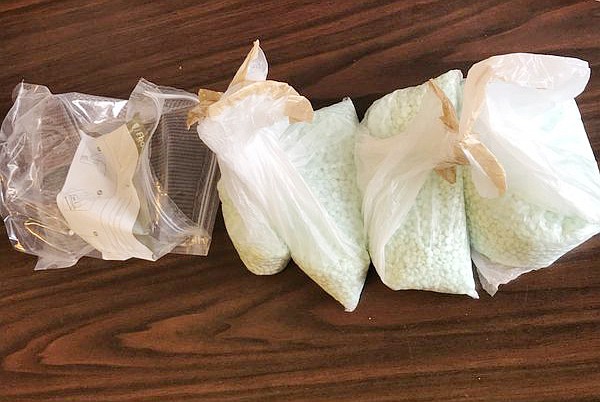 Some of the nearly 20,000 pills containing fentanyl discovered by a Yavapai County Sheriff’s deputy Thursday, April 1, 2021, hidden in an SUV’s storage compartment, according to a news release. (YCSO)

A 23-year-old Phoenix man was arrested on multiple drug charges after a Yavapai County Sheriff’s deputy found nearly 20,000 pills containing fentanyl hidden in a storage compartment in the trunk of his SUV, according to a Friday night news release.

“Our K9 team is doing a fantastic job in preventing these dangerous drugs from making it into our community,” Sheriff David Rhodes said.

“While we do what we can to hurt the supply, there wouldn’t be a supply without a demand. So, we hope that if you know someone who suffers from addiction, please get them the help they need,” he added.

Conducting a traffic enforcement stop at Bloody Basin on northbound Interstate 17 at around 3:30 p.m. Thursday, April 1, the YCSO K-9 deputy noticed “multiple red flags” when interviewing the driver of the Dodge Journey.

During a subsequent search of the vehicle, for which the driver gave consent, the deputy discovered an estimated $400,000 worth of fentanyl pills, said Scott Reed, spokesperson for the YCSO. 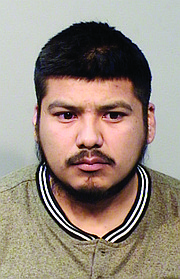 A father and mother had hidden the pills inside a child’s car seat. Their children, all younger than 6, were in the vehicle during the stop.

The estimated value of those drugs was $1 million, meaning within the week, YCSO has taken 72,000 pills and about $1.4 million worth of fentanyl off quad-city area streets.

“These drugs are flooding into our state from the southern border, making its way across the U.S. We have seen a 1,500% increase so far this year when we compare our seizures to the last six months of 2020,” Rhodes stated.

Since January 2021, the YCSO K9 unit “alone has prevented more than 240,000 pills — estimated value of $4.8 million — from getting trafficked across Arizona and to the rest of the United States. That’s a dramatic increase from the only 15,000 seized between July and December 2020,” the sheriff said.