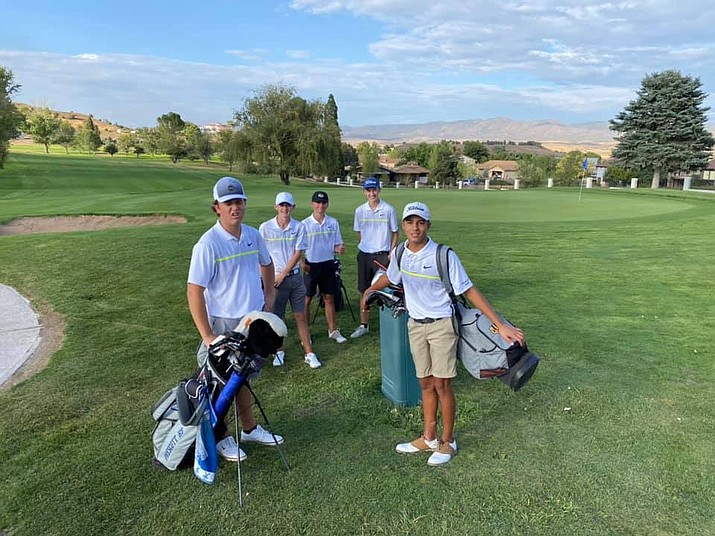 The Prescott boys golf team won its match against Bradshaw Mountain and Centennial Wednesday, Sept. 23, at the Prescott Country Club. Leading the way for the second straight week was Cade Buetner with a score of 37, good enough for a three-way tie for first place. Scotty Jackson played a consistent round and finished with a solid 38. Brent Chambers had his lowest score of the season with a 39. Chance Hill started with a double bogey but was able to finish with a 40. Josh Miller and Jacob Mcelfresh both shot rounds of 45. Prescott girls golf also took first place in their respective match against Bradshaw Mountain and Saguaro on the same day at Antelope Hills Golf Course. Five Badger golfers took top-5 honors that day with senior Sarah Stovall shooting a personal-best 48.

The new Prescott Valley Indoor Football League (IFL) team has scheduled an official team open tryout on Saturday, Oct. 10, at the Boys & Girls Clubs of Central Arizona (8201 E Loos Dr., Prescott Valley). Registration, which will cost $50 per participant, will begin at 9 a.m. on Saturday and the tryout will last from 10 a.m. to 1 p.m. Everyone who participates in tryouts will receive a T-shirt. Participants must bring their own cleats, shorts and accessories. The tryout is non-contact, so pads and helmets are not necessary. Coaches will be running eight-on-eight drills and more. Participants also must be prepared upon their arrival as no locker-room facilities will be available, although restrooms will be accessible.

After brushing aside Mingus 3-1 for its first season win, Prescott volleyball followed that up by sweeping Cactus 3-0 on Sept. 25. Senior Kate Radavich led the way for the Badgers, recording 15 kills, seven digs and four serving aces. Ellie Fenderson contributed with 31 assists and eight kills of her own. The Badgers are now 2-1 on the season.

In a hard-fought contest, Prescott badminton narrowly defeated Horizon 5-4 on Sept. 24 to bring their record to 4-0 on the season. Despite Prescott’s No. 1 Kailey Crockett and No. 2 Nicole Raiss both falling in their singles matches, No. 3 Megan Townsend, No. 4 Emily Nelson, No. 5 Riley Crockett and No. 5 Cassideen Naylor made up for it by winning in their respective matches. The Badgers only took one match in doubles action but that’s all they needed to secure them the victory.

The Chino Valley girls soccer team avenged last year’s regular-season loss to Blue Ridge by disposing of the Yellow Jackets 4-0 on Saturday, Sept. 26. The Cougars wasted no time getting on the board by scoring off of the opening kickoff when Madi Foster found Kaitlyn Roskopf 25 seconds into the game. Madi Foster found the net twice from assists from Sabina Lopez, one being a perfectly timed header. Roskopf and Foster connected again on the night to round out the final score. London Wigen stepped in to play sweeper for an injured Joelle Krogh and didn’t skip a beat. Sophomore Mariah Morgan came off the bench to play shut-down defense on the Yellow Jackets top-scoring threat. The Cougars are now 4-0 on the season while outscoring their opponents 22-1.