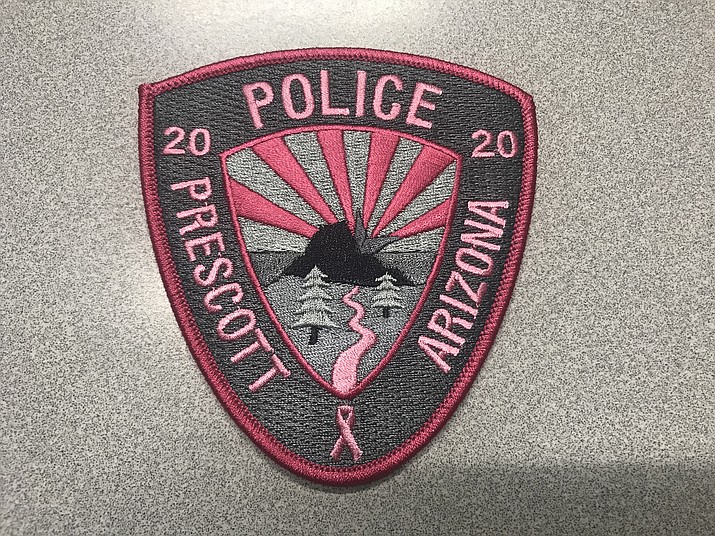 This year’s newly-designed Pink Patch to support Breast Cancer Awareness can be purchased for a $5.00 donation at the Prescott Police Department, Prescott City Hall, the Chamber of Commerce, and both YRMC gift shops in Prescott and Prescott Valley. (Prescott Police Dept./Courtesy)

All proceeds raised throughout the month of October will go directly to the Yavapai Regional Medical Center Breast Care Center to support early detection efforts, palliative care, cutting-edge treatment and comfort care for patients in our community.

“This will be the third year our department will help to support this cause,” PPD said in a release. “We will be changing our uniform patches pink. The 2020 patch design is new, allowing you to add to your collection.”

ORIGINS OF THE PINK PATCH

Wearing the pink patch originated in 2013 when personnel at the Seal Beach Police Department in Southern California wore pink patches on their uniforms during Breast Cancer Awareness Month. In 2015, the Irwindale Police Department in California ran with the idea and sold their patches to the community, raising more than $20,000 for one of the nation’s largest and most effective cancer centers, the City of Hope. Chief Anthony Miranda took the idea to the Los Angeles Police Chiefs Association and 25 local agencies came on board. Today the Pink Patch Project has expanded to several hundred partner agencies throughout the world and includes partners from police, sheriff, fire, EMS and federal departments worldwide.

HOW YOU CAN HELP

Due to the pandemic, the department is unable to host as many events as last year, but the public can purchase a patch to help in the fight against breast cancer.

“We invite our community to show why we are Prescott Strong and purchase a patch for such an amazing cause,” PPD wrote in the release. “We will have the newly designed pink patch on sale at several locations during the month of October.”

The patches are available for a $5.00 donation at the Prescott Police Department, Prescott City Hall, the Chamber of Commerce, and both YRMC gift shops in Prescott and Prescott Valley.