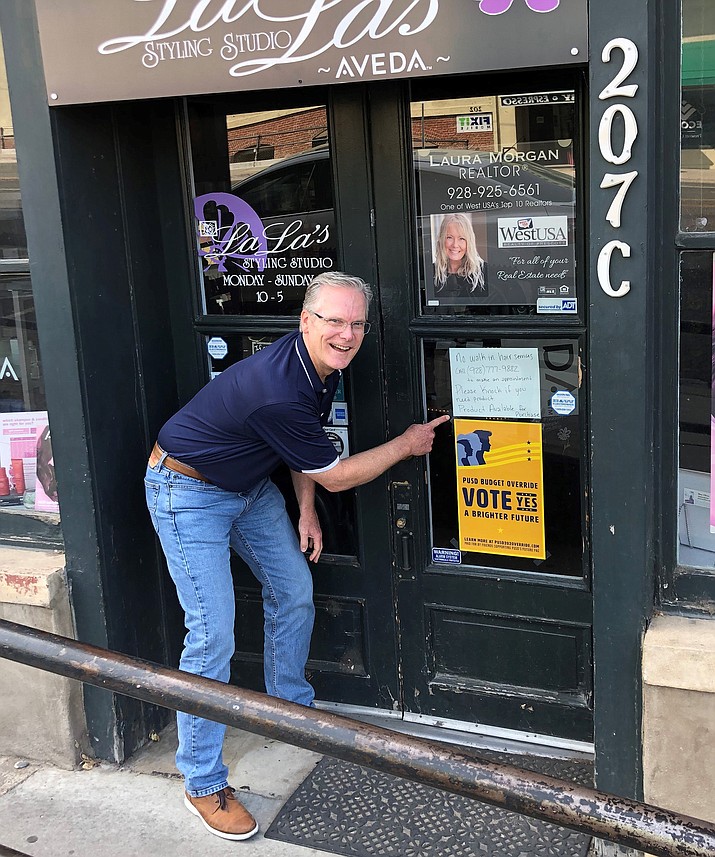 Friends of Prescott Unified School District’s Future Political Action Committee Chairman Scott Fagin points out a "Vote Yes" poster at a downtown Prescott business. The Friends group is working to get voters to approve a budget override for PUSD. (Courtesy)

Scott Fagin is championing the effort to convince taxpayers this year to vote to increase the Prescott Unified School District’s budget override from 4.66% to 8%.

He’s a father of three children, his youngest, Marleigh, is a Prescott High School freshman; he is also the husband of Mile High Middle School math teacher Mandi Fagin; a local bank executive and taxpayer who is a firm believer that a high-caliber public education is a necessity if one wishes to live in a vibrant, prosperous community.

“I have a passion for public education. I believe in it,” said Fagin, who moved to Prescott three years ago and is chairman of the Friends of Prescott Unified School District’s Future political action committee. “I believe education is a cornerstone to every viable, successful community.”

Events: On Wednesday, Sept. 23, the committee will be distributing yard signs and magnets in the parking lot at the Prescott United Methodist Church on West Gurley Street from 3:45 to 5 p.m.

On Oct. 2, the committee will host a drive-through voter registration event at the church from 3:45 to 4:45 p.m.

The website will offer a YouTube channel webinar about how to participate, and includes a calculator so that visitors can check their actual tax payment based on the assessed value of their home.

Few places can compare to Prescott when it comes to scenic beauty, a thriving business and arts community, top-quality medical care, and a plentiful water supply to name just a few of its commendable amenities, Fagin said.

“I will argue with you, though, that if you don’t have good education all of that will die,” Fagin said.

Five years ago, Prescott taxpayers stepped up to enhance public education with a $15 million bond and 4.66% budget override that enabled the district to provide 5% pay increases to all of its faculty and staff. In subsequent years, the district continued to increase salaries to halt the long-time revolving door of high-caliber professionals able to travel not too far to obtain higher pay with lower living costs.

Fagin is quickly able to recite the before and after turnover rates. Before the 2015 override, the annual teacher turnover rate was 39.4% and now it is less than half that number, he noted.

In any organization, Fagin said, the ability to retain the best of the best enables that entity to grow and prosper.

From his own experience, Fagin said he watched this summer as his wife and her fellow high school and middle school math team worked as a close-knit group to plan a curriculum able to meet the challenging demands of students in a school year like no other. Their ability, and those of their veteran colleagues, to be in lockstep with one another on bringing the best instruction to students only means higher achievement, stronger graduation rates and higher college entrance exams, Fagin said.

Even with this override effort — one endorsed by the PUSD Governing Board at almost 3% more than the existing level — Fagin said the average annual teacher pay in Prescott will still be about $3,000 less than the state average.

If Prescott is seeking to be a place eager to attract up-and-coming business and medical professionals, many likely to have young families, Fagin said it is imperative the community have a boast-worthy school district.

Yet, he is clear a strong school system is just as important to retirees who are seeking desirable places to live that will enable them to enjoy a broad smorgasbord of things to do in their golden years.

This budget override will require a tax increase, but the cost to each taxpayer against its value to the district is nominal, Fagin said. For the averaged assessed home value in Prescott of $275,000, the tax implication is $22.51 a year, or six cents a day, he said.

In this vitriolic election season, and in a year where COVID-19 still looms large, Fagin and his 15-member team of education advocates know that spreading the word about this ballot effort is key to its success.

“We’re excited,” Fagin said about the campaign that he believes seems to be tracking positive with the majority of people they are encountering through social media, their website — www.pusd2020override — as well in one-on-one conversations.

Between now and the election, the committee will also be hosting a variety of public events to inform the public about the needs, including handing out yard signs, magnets and erecting posters for area businesses.

District Superintendent Joe Howard voiced appreciation for the committee’s efforts, and noted that it was their public commentary that prompted the Governing Board to opt for increasing the override.

If this override passes, the district will receive about $800,000 per year that can be used for salaries, but if it fails the district will lose about $1 million over the course of the next three years, Howard said.

District Chief Financial Officer Brian Moore explained that overrides are approved for seven years, with full funding for the first five years that are then reduced by one-third in the final two years. If this ballot effort is approved, the override increase will not take effect until the 2021-22 school year.

Fagin praised his committee members who have made passing this override a top priority. He, too, praised Howard as a “good steward” of the district’s limited resources over his five-year tenure.

“I couldn’t be more thrilled with our team,” Fagin said. “All are involved in the community and have a heart for education and a heart for teachers. We all feel very strongly about the initiative.”