Prescott Valley police fighting back against opioid scourge
With a reported 57 cases of overdoses since October 2019 in Prescott Valley, police get grant for NARCAN 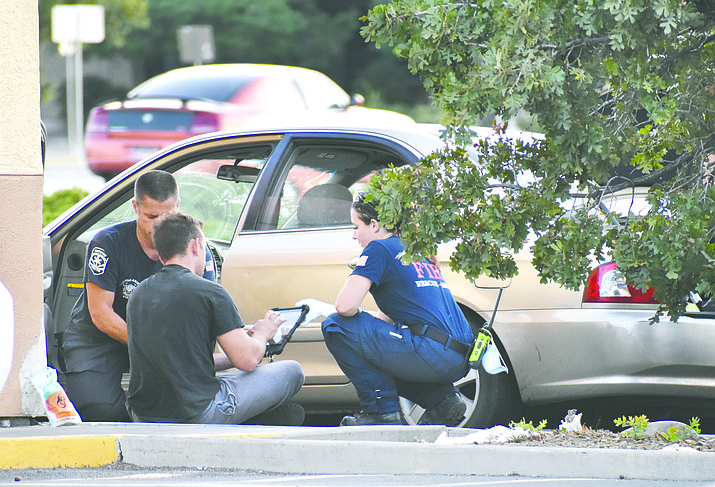 Firefighters with the Central Arizona Fire and Medical Authority treat a car’s passenger who officials say suffered a drug overdose Sept. 1, 2020, in the drive-thru of a fast food restaurant in Prescott Valley. The 29-year-old man had stopped breathing but was treated and revived with NARCAN, a life-saving opioid overdose reversal medication. (Richard Haddad/Courier, file) 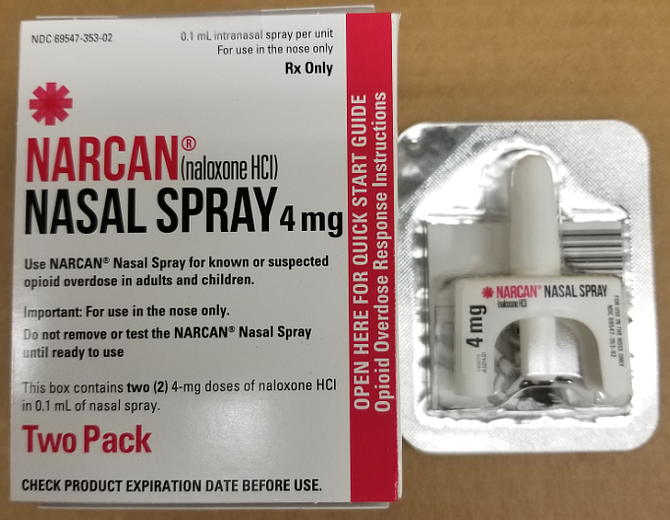 A two pack of NARCAN similar to the one that will be issued to Prescott Valley Police officers while on duty after receiving a grant to purchase the life-saving drug. (PVPD/Courtesy)

Prescott Valley Police Department (PVPD) and Central Arizona Fire and Medical Authority (CAFMA) officials will tell you that a new plague is running in northern Arizona’s streets, and it is not related to the coronavirus.

Several law enforcement agencies across northern Arizona, including the Partners Against Narcotic Trafficking Task Force (PANT) reported on Monday, Sept. 14, that they had recently made significant arrests tied to the use of dangerous drugs, particularly fentanyl, as well as sales of the illicit drugs.

“There is still too much availability of these deadly items on our streets and in our communities,” a Sept. 14 PVPD news release stated.

However, a more powerful statement from the release followed, adding: “Since October 2019, Prescott Valley Police, along with the CAFMA, have responded to 57 reported drug overdoses within the Town of Prescott Valley.”

Now, PVPD plans to do something significant about it.

PVPD reports that it recently received enough federal and state grant money through the Arizona Department of Health Services to buy enough doses of prescription NARCAN, or naloxone, for all 77 of its officers to carry during their shifts. NARCAN is an opioid overdose treatment.

CAFMA EMS Chief Doug Niemynski said his agency, which primarily covers Prescott Valley and Chino Valley, gets an IV form of naloxone from Yavapai Regional Medical Center (YRMC) for its paramedics to use in the field.

Niemynski added that fentanyl and opioid abuse is not solely a Prescott Valley issue.

“It is a statewide problem,” he said. “To characterize a particular community as any worse than another without good data would be inappropriate.”

PVPD officers have received the appropriate training to administer NARCAN to those who need it, the release stated.

The NARCAN, which can be administered to adults or children, comes in packs of two, 4-mg doses in 0.1 mL of nasal spray. NARCAN has been proven to save lives.

“Of the 57 medical calls for service over the past year, Prescott Valley police officers arrived on scene and administered NARCAN to 16 separate individuals, resulting in saving 12 lives,” the release added.

PVPD reports that “many drug dealers” are manufacturing fentanyl-laced pills “to look like or simulate the appearance of legitimate medication.”

“It’s the whole supply-and-demand thing,” Kaufman said. “People are manufacturing these pills and they want to make money.”

Kaufman added that he is not sure how long the grant money will last, but that PVPD is committed to continue combatting opioid abuse in whatever ways it can, including buying NARCAN.

A spokesperson for the Prescott Police Department was not immediately available late Tuesday afternoon, Sept. 15, to answer questions about this issue.

PVPD officers urge people not to consume any pills from unknown sources and not to take any medications not prescribed to them specifically.

Any medications that are found, unused, or unneeded may be safely deposited at PVPD headquarters, 7601 E. Skoog Blvd., or at any Walgreens pharmacy, including 2880 N. Centre Court in Prescott Valley and the pharmacy’s locations in Prescott and Chino Valley.

If you or someone you know has a drug problem, help is a phone call away.