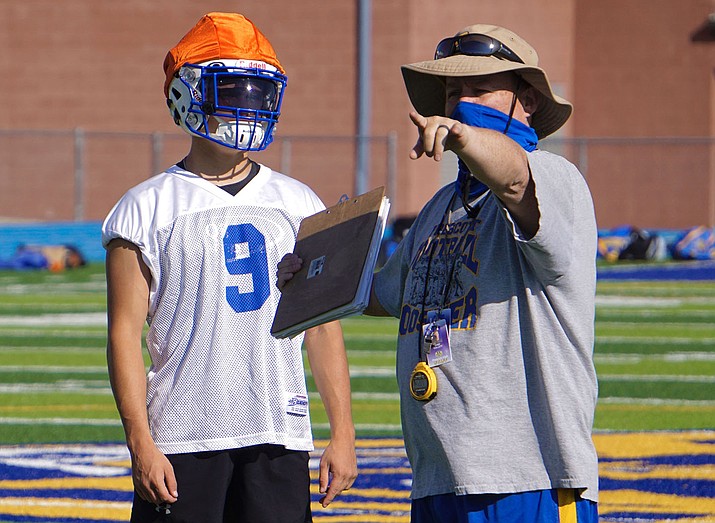 Loss of 26 seniors, late start did not help either

PRESCOTT — One good half of football. That’s all the Prescott football team needed last fall to secure their first region (or section) title in nearly a decade.

Up 20-7 at halftime on a chilly October night in Flagstaff, Prescott surrendered 27 unanswered points over the next 24 minutes of play and lost to Coconino in Week 7, 34-27.

The Panthers would eventually go on to claim the 4A Grand Canyon region title with a perfect 6-0 record. The Badgers? They finished 5-1.

In the last 13 years, Prescott has finished a region schedule with a perfect record three times, the first in 2007 with a 5-0 record and 4A Western Sky title. The same for 2008, going 5-0 in the same region for a title.

Fast forward to 2020, and the Badgers are not only dealing with the loss of 26 seniors, including Aaron Greene (San Diego State), Jacob Police, Sylas Espitia, Dellin Boyd, Clay Gross and Rhett Pearce, among others, but a worldwide pandemic that has forced Arizona high schools to start practice a month later than normal.

“COVID-19 has placed a lot on us, we are grinding all the time and have put in all the work [to be ready],” senior wide receiver and strong safety Luke McCauslin said. “We should be in the fifth week already, but we’re not. All we have to do is work hard and hope the season will occur. We’ll keep pushing on and keep getting better each day.”

Hoping the 2020 fall season will “occur” is likely on the minds of all Badger players and their coaching staff. The Arizona Interscholastic Association has approved the fall season under certain parameters, but if COVID-19 numbers begin to climb again across the state of Arizona, the football (and other sports) season could be in jeopardy.

But if players, coaches or athletic trainers within the Prescott program get sick, or an opponent gets sick, that thought process could change quickly.

“Honestly, we need to stay on top of it,” senior quarterback Wyatt Snyder said about the AIA protocols amid COVID-19. “[We] follow all the guidelines every day for football. We take our temperatures, masks go on immediately until we reach the field, then when we leave it, they go back on.”

Prescott isn’t the only program behind as most Arizona football teams were forced to delay, if not cancel, their offseason programs. And when they were restarted, social-distancing rules made it awfully tough.

“This summer was pretty hard, we couldn’t even get in the gym and lift,” McCauslin said. “There were a few of us lifting at home to get bigger, but we weren’t allowed at the school. And we had to stay 6 feet apart. We didn’t use a ball all summer, we just conditioned.”

One of the AIA protocols in place this summer included a rule that didn’t allow players to share footballs.

For a quarterback unable to throw to his receivers was odd, Snyder said, explaining that receivers could run routes, but they couldn’t catch his passes.

“It’s been weird. When we came back this summer, thinking it was normal summer lifting, we had to wear masks and social distance. We couldn’t use a ball, either,” Snyder said. “Getting back on the field with everyone this week, using our pads has been great.”

Although losing 26 seniors and having to deal with COVID-19 at the same time is an unprecedented burden, Collett and his staff have rolled with the punches.

“This is a really, really coachable group. It’s a good group of kids. We have some seniors that will need to have big seasons. But, we have a promising sophomore class and a hard-working junior class,” Collett said. “By the end of this, we could be a good football team, but there will be a learning curve no question.”