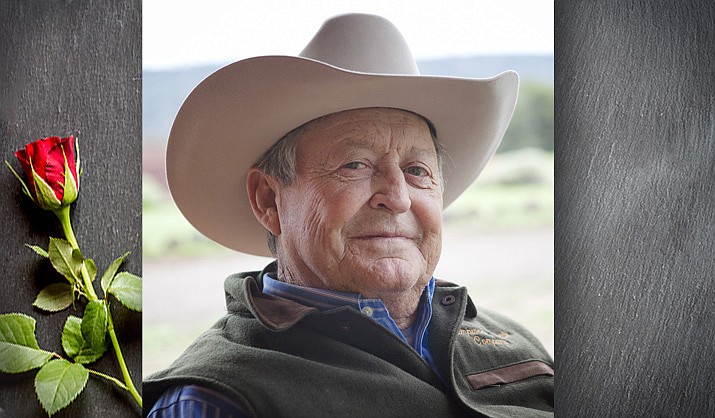 Throughout his school years, showing cattle and other livestock was his passion, and he won many state championships, as well as spending every moment he could on his family’s ranch at Woodville, Mississippi. After graduating from Louisiana State University in 1971 with a BS degree in animal science, he went to work for Great Plains Western Corporation, a multi-faceted cattle and grain corporation with ranches in six states.

While managing the company’s Triple C Brangus Ranch near San Antonio, Texas, he met and married Kathy Gary, who was editor of the Brangus Journal. They moved to Whittier, California in 1976, where Great Plains named Swayze vice president of ranching. In 1978 he left the company to take over 6M Corporation, his family’s ranching operation in Mississippi, where he ran a stocker and cow/calf operation.

Six years later he realized a lifelong dream to ranch in the West when he moved to Prescott to be involved with the Gary family’s Horner Mountain Ranch at Dugas. He also joined the development company started by his father-in-law, Bill Gary, and he developed Granite Oaks Subdivision, Inscription Canyon Subdivision and the Prescott Airpark in Prescott, Highland Meadows Subdivision in Williams, and later with other partners, The Vineyards at Cottonwood.

Over the years Swayze’s ranching operation continued to grow. After selling Horner Mountain Ranch in 1995, the McCraines owned the Wagon Bow Ranch and SV Ranch at Wikieup, then the 7 Up Ranch at Prescott.

He was also active in many livestock organizations and activities. Shortly after moving to Prescott he took over management of the Arizona Hereford Association Bull Sale; then in 1988, he and Richard Smyer of Prescott Livestock Auction, started the Prescott All Breed Bull Sale. In 1992 Swayze was instrumental in turning it all into Cattleman’s Weekend, northern Arizona’s largest livestock event.

The Arizona Hereford Association named him “Cattleman of the Year” in 2005.

He was also on the Arizona Governor’s Communication Committee and Yavapai County Planning Committee, and he was a longtime member of the Arizona Cattle Growers Association.

In 2005, Swayze was diagnosed with cardiomyopathy and received a heart transplant. He was a fighter who didn’t let it slow him down. In 2009 KJ Kasun came on board as a partner in Campwood Cattle Company, which today is comprised of the 7 Up, the Lazy K8 at Skull Valley, and a desert lease known as the TT’s at Black Canyon City, a total of 185,000 acres of rangeland running more than 1,000 head of mother cows and 1,400 stockers, in addition to a registered Quarter Horse program. Above all Swayze was known for his kind heart, good business sense and stewardship of the land. As one friend commented, “his word and handshake were as good as gold.”

He is survived by his wife of 44 years, Kathy; sister, Maellen Langlois; niece, Farrar Frazee; her husband, Andy and daughter, Clare; nephew, Nathan Gardner; his wife, Roxanne and their children, Morgan and Cole. A celebration of Swayze’s life is scheduled for early next summer at the 7 Up Ranch.

In lieu of flowers, memorials may be made to the Arizona Cattle Industry Research and Education Foundation (ACIF), P.O. Box 2619, Mesa, AZ 85214. Arrangements entrusted to Ruffner-Wakelin Funeral Homes. Please log on to www.ruffnerwakelin.com to sign Swayze’s guestbook and share a memory with the family.