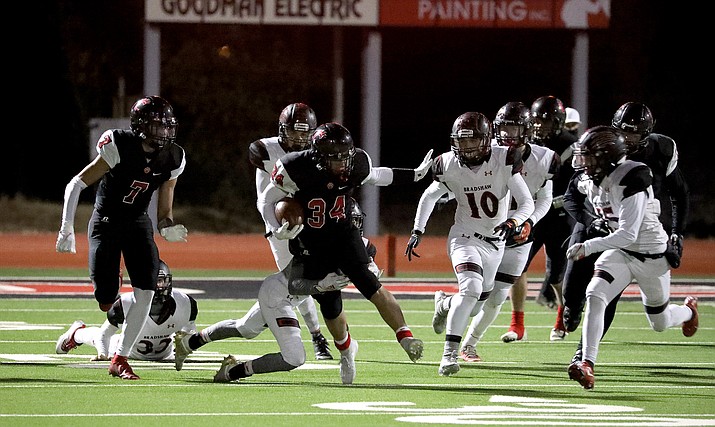 Coconino running back Zach Bennett (34) avoids multiple tacklers from Bradshaw Mountain on Friday, Oct. 30, 2020. Bennett scored three touchdowns in a 38-14 win for the Panthers, which are now 5-0 on the season. Bradshaw Mountain drops to 3-2 overall. (Arizona Daily Sun/Courtesy)

But once the fourth quarter arrived, it was all Panthers.

Coconino moved one big step forward to clinching its second straight region title, outscoring Bradshaw Mountain 15-0 in the fourth period behind its bruising rushing attack and stalwart defense in a 38-14 victory Friday, Oct. 30, in Flagstaff.

The Panthers stayed unbeaten at 5-0 and 4-0 in the Grand Canyon region, while the Bears dropped to 3-2 and 3-2 in region play. Bradshaw Mountain has been eliminated from region title contention. Coconino has two games remaining, including at Mingus Nov. 6 and versus crosstown rival Flagstaff Nov. 13.

Coconino has not lost a game since the first round of the 4A state playoffs last November, when the Panthers fell 10-9 to eventual state semifinalist Gila Ridge.

Going into its game against Bradshaw Mountain, Coconino had shut out its previous two region opponents by a combined 97-0. The Bears managed 14 points in the first half, but the Panthers played ball-control offense in the second half while their defense turned the screws.

Bears quarterback Josh Grant had not thrown an interception this season heading into the Coconino contest. He tossed his first pick midway through the second quarter. Bradshaw Mountain had committed only two turnovers this season until Oct. 30.

In the first half, Cardoza scored on two long TD runs of 33 yards and 60 yards to lead the Panthers to a 23-14 halftime lead.

Not to be outdone, Bennett evaded several Bears tacklers for an 85-yard TD scamper with 6:05 left in the second quarter. The Panthers had scored 14 points off of turnovers at that point.

Grant kept the visitors in the game, though, as he scored on a 66-yard TD run and tossed a 23-yard TD pass to sophomore tight end Malachi Stephenson inside of 2 minutes left until intermission to cut the deficit to 9 points.

The Arizona Interscholastic Association (AIA) will release its first 4A conference power-point rankings of the coronavirus-shortened 2020 season at noon Tuesday, Nov. 3, at: azpreps365.com/rankings/football/4a.