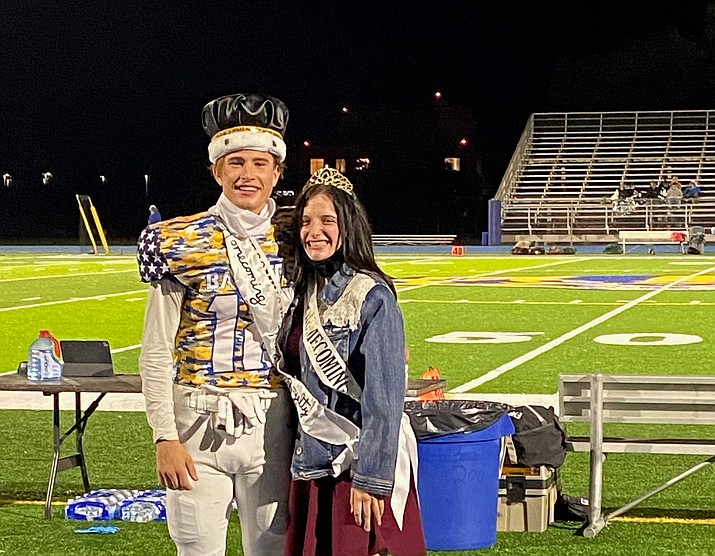 PRESCOTT — Nathan Wright scored four touchdowns, Brayden Nelson recovered a fumble off a muffed snap for a score and the Prescott football team scored 41 unanswered points in the first half to beat Mohave 55-0 on Friday night.

It is the second straight victory for the Badgers (2-3, 2-3 Grand Canyon) after they started the fall campaign 0-3.

In the second quarter, Nelson recovered a fumble off a bad Mohave snap and returned it 40 yards for a touchdown, his second defensive score in as many weeks after returning a Pic-6 74 yards against Flagstaff in Week 4.

Wright scored his third rushing touchdown of the night on a 1-yard run with 5:27 left in the second quarter to make it 34-0 Badgers, then quarterback Wyatt Snyder found him on a 23-yard pass for a score to put Prescott up 41-0 and they never looked back.

Friday night’s 55-0 win over Mohave wasn’t the only celebrating the Badgers did as Nelson was named 2020 Homecoming king with Maddie Young as his queen.

Prescott travels to cross-town rival Bradshaw Mountain (3-2, 3-2 Grand Canyon) in Week 6 action Friday, Nov. 6. The Bears are coming off a 38-14 loss to Coconino (5-0, 4-0 Grand Canyon), which only needs a win against their rivals in Flagstaff in Week 7 on Nov. 13 to claim their second-straight region title.

Kickoff Friday night between the Bears and Badgers is set for 7 p.m. in Prescott Valley.