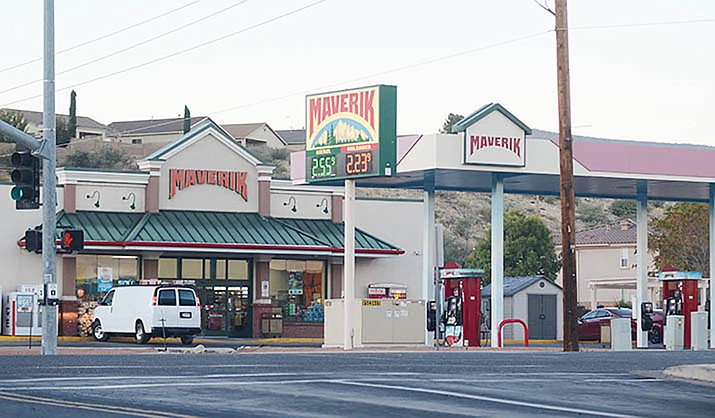 The Camp Verde Marshal’s Office says a confrontation and shooting happened Tuesday evening, Oct. 27, 2020, at this Maverik convenience store on Finnie Flat Road in Camp Verde. Both shooters were hospitalized, CVMO said, but no arrests have been announced. (Vyto Starinskas, for the Courier)

CAMP VERDE – A Sedona man and a teenage boy were injured after a Tuesday evening shooting at a convenience store, according to a release from the Camp Verde Marshal’s office.

Deputies were called to the Maverik store, in the 500 block of Finnie Flat Road in Camp Verde on Tuesday, Oct. 27, at about 8:20 p.m., for a report of shots being fired, according to a news release.

An investigating officer found that at least two people were involved and had left the area. Law enforcement later located Christian Michael Price, 23, of Sedona outside a Circle K convenience store a few blocks away.

Price was treated by medical personnel and was later flown to a Phoenix hospital for further treatment.

The boy was treated and was flown to a different Phoenix hospital for further treatment, the release states.

An officer reviewed surveillance video. Police said that in the video, Price can be seen pulling up to the gas pumps, getting out, and then start to fill up when he is approached by two people on foot.

One of those people was the 14-year old boy, police said.

Video shows some type of confrontation between Price and the boy. Soon, the boy pulls out a handgun and begins firing at Price.

In the video, police said, Price also pulled out a gun, returning fire. Both shooters were struck, and both retreated. Price was able to make it back to his vehicle and drove off, police said.

The boy stumbled to the sidewalk area outside the store. Further footage, according to police, shows that a vehicle pulled up in front of the store and the occupants got the 14-year old into the vehicle and drove off.

No arrests or charges were mentioned in the news release.

The extent of the injuries to either person, referred to as “suspects/victims” in the release,” was not known as of Wednesday morning.

The Marshal’s Office said the investigation is ongoing and follow-up is being conducted by the CVMO Investigations Unit, along with the Yavapai County Attorney’s Office.

Additional information will be released as it becomes available, the release said.