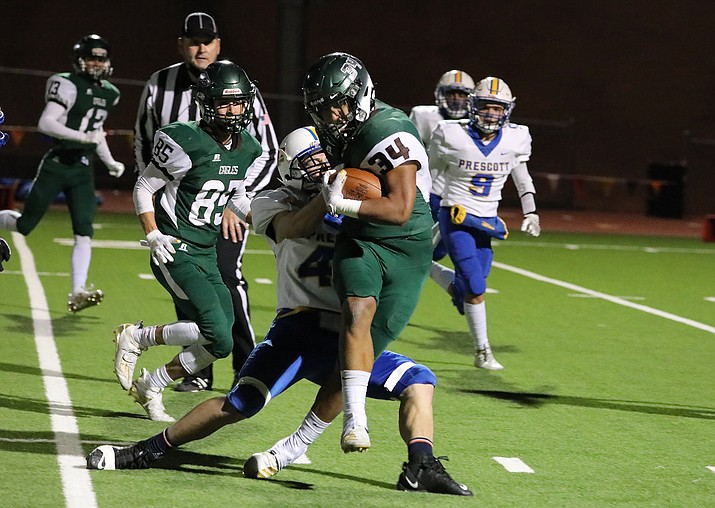 A Prescott defensive player attempts to bring down Flagstaff’s Luis Jaramillo (34) on Friday, Oct. 23, 2020. The Badgers forced four Eagle turnovers and won 38-28. It was their first win of the season. (Arizona Daily Sun/Courtesy)

FLAGSTAFF — Brayden Nelson scored two touchdowns and nabbed two interceptions, one of which he returned 74-yards for a score in the third quarter and the Prescott football team rebounded from an awful loss in Week 3 to upset Flagstaff 38-28 on the road Friday night.

“That was a fun play,” Prescott head coach Cody Collett said about Nelson’s Pic-6 in a phone interview late Friday.

And with 5:44 to go in the fourth, Cervando Vega picked off Eagles quarterback Morgan Bewley, his third of the night, setting up a 2-yard touchdown run by Nathan Wright and the Badgers never looked back.

“In the first three games, I believe we were somewhere in the minus 10 range in turnovers, or in that neighborhood,” Collett said. “Tonight, we were plus four.”

It is the first win of the season for Prescott, and Flagstaff’s first loss.

Collett added that Nelson, a third year varsity senior, was so unbelievably positive not only during the 41-0 loss to Coconino a week ago, but all week in practice leading up to Friday’s victory.

“His positivity, I think, filtered throughout the entire program. We start 0-3, and he was so positive. I’m so proud of his character that he showed this week,” Collett said. “A senior, 0-3, you get beat that bad at home (last week), it would be easy to put your head down, but he didn’t.”

After Flagstaff (3-1, 3-1 Grand Canyon) answered when Bewley found Ryan Tagle on a 12-yard strike, Cody Leopold’s 46-yard touchdown run put the Badgers up 14-7 with 2:19 to play in the first quarter.

In the second quarter, Bewley found Tagle again in the end zone to tie it 14-14, and Luis Jaramillo’s 5-yard touchdown run gave the Eagles a 21-14 lead with 5:26 to play in the first half.

It was the seventh rushing touchdown of the season for Jaramillo, who is in the running for Grand Canyon region MVP with Coconino running back Zach Bennett.

Leopold, however, would get his second rushing touchdown of the night on a 22-yard run, then Ryland Waples hit a 28-yard field goal as time expired to put Prescott up 24-21 and they would never trail again.

Leopold rushed for more than 100 yards and two touchdowns Friday night, while Wright added another 100-plus yards on the ground and a score.

“Our kids prepared and practiced really really well this week. Last week, I think, is not the team that we are. And in the first two weeks, there were a few plays that if they went our way, we win. But we didn’t. Still, you have to credit our kids for battling and a great win tonight,” Collett said.

Flagstaff is scheduled to host Cactus in Week 5, with a kickoff time slated for 1 p.m. at Cromer Field.